Fear and hoping: expectations surge ahead of new US-Taliban talks 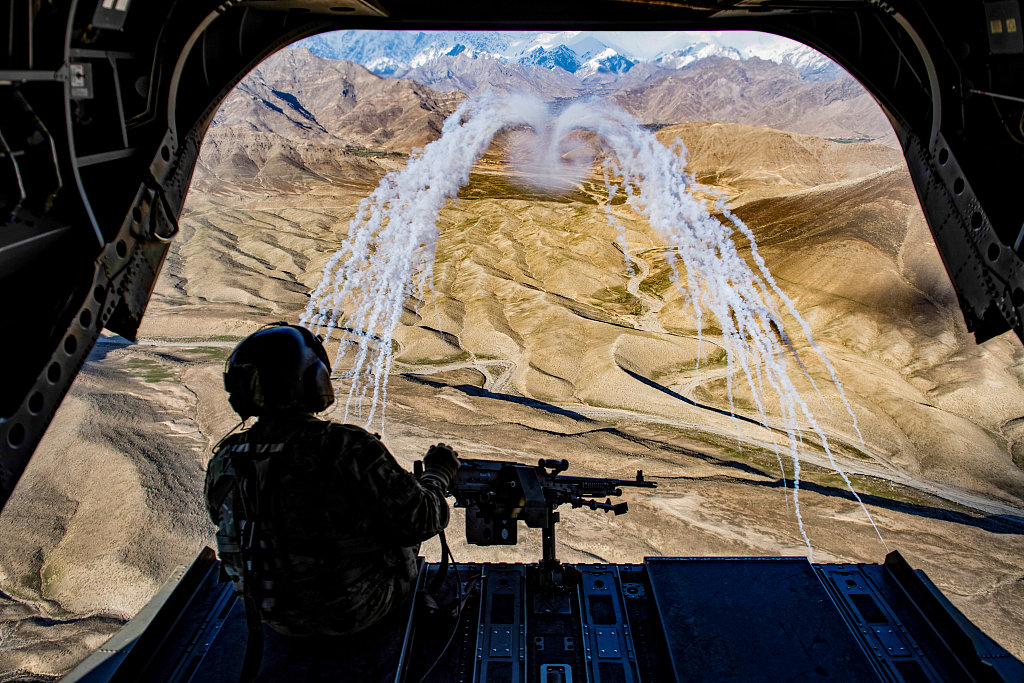 A US Army crew chief flying on board a CH-47F Chinook helicopter observes the successful test of flares during a training flight in Afghanistan, March 14, 2018.  (Photo: VCG)

The US and the Taliban are to meet in Qatar for fresh talks Monday seeking an end to 17 years of grinding conflict in Afghanistan, with the stakes ratcheting higher as the spring fighting season approaches.

Marathon talks held in Doha last month have stoked hopes of a breakthrough after the two sides walked away with a "draft framework" that included a Taliban commitment to prevent Afghanistan from once again becoming a safe haven for international terror groups.

It was the most substantial engagement by Washington with the militants since US forces ousted them from power in 2001. But there is still no accord on a timetable for a US withdrawal or a ceasefire -- both major issues on which previous efforts have foundered.

Neither side has stated how long they expect the meetings to last or the details of what will be discussed.

Analysts say this round will likely see the Taliban push for the removal of its leaders from a UN travel blacklist, matched with pressure from the US for the militants to open a dialogue with the Afghan government.

"Both sides are going into this process with open minds and a sense of urgency as the weather gets warmer and fighting season draws closer," Graeme Smith, a consultant based with International Crisis Group, told AFP.

The Taliban have steadfastly refused to negotiate with Kabul, whom they dismiss as "puppets". They have also stated that, without a withdrawal timetable, further progress is "impossible".

US President Donald Trump's apparent eagerness to end America's longest war, the Afghan government's fear of being sidelined, and the coming of spring all weigh on the process.

"Eyes are on the Taliban to see if they are capable of compromising," said analyst Michael Semple.

"Can they come up with a sufficient compromise to agree to a formula for an intra-Afghan dialogue that absolutely involves the current Afghan government?"

Khalilzad, he added, "has stirred up the peace process in a way that nobody over the previous two decades had".

The gathering momentum has spurred fresh peace demonstrations and cautious hope in Afghanistan.

But there is also growing unease, with fears the government is being pushed aside and that progress which many Afghans have paid for with their lives could yet be undone if the US rushes for the exits.

Women's groups and civil society organisations have warned that a speedy withdrawal or lenient deal with the Taliban could pave the way for a return of their repressive rule, or an even bloodier civil war.

But not one representative from the current administration of President Ashraf Ghani was present at the informal talks, deepening the sense of anxiety.

Pakistan, Qatar, Saudi Arabia and the United Arab Emirates are also playing a role in the talks, as Russia and China watch closely, and many observers fear regional disputes could yet derail the process.

Pakistan, which has long wielded influence over the militants and been seen as key to any peace push, has already suggested that soaring tensions with its nuclear arch-rival India could disrupt the talks.

But Taliban expert Rahimullah Yusufzai said this time around Pakistan's stance may be more chest-thumping bravado than an actual threat.

He said that with the US and the Taliban talking to each other directly, "I think Pakistan's role will not be that important now."

The talks have been buttressed by heavy snowfall across Afghanistan, sharply reducing fighting and providing much-needed space for negotiations.

But Yusufzai warned that another bloody fighting season will likely kick off once the snow melts, as the Taliban seeks to maintain its momentum on the battlefield to maximise pressure at the negotiating table.

"I think they have to keep up the momentum until a ceasefire," he said.

Others warned that more bloodshed might undercut the fragile gains the talks have achieved so far.

"It will be more challenging to pursue peace in the months that come if the Taliban... resort to a large-scale spring offensive," said Semple.