As Australian exports to China fall amid fraught bilateral ties, Australian agribusinesses have a growing fear of job losses and the wine sector, being hit hardest, is the most concerned about anti-dumping investigations, an industry survey finds. 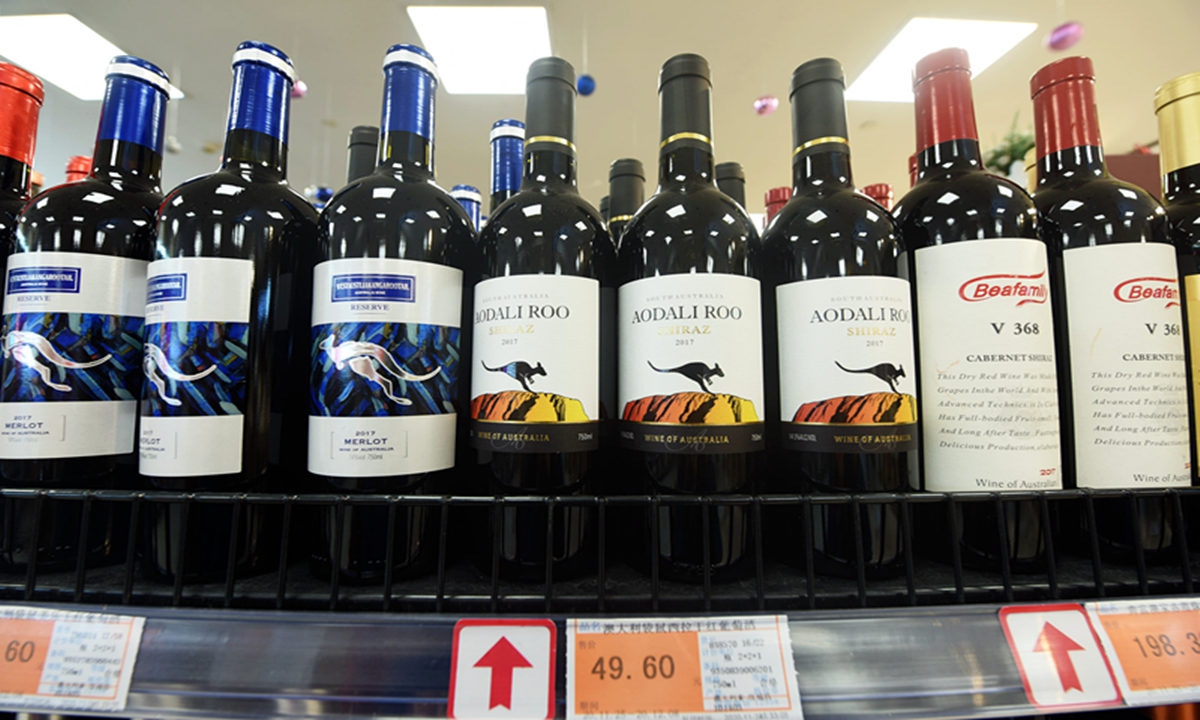 Bottles of Australian wine on the shelf of a supermarket in Hangzhou, East China's Zhejiang Province on November 27, 2020 Photo: VCG

Trade with China has supported the Australian labor market. A majority (54 percent) of companies believed that a decrease in exports to China will result in job losses. The wine sector indicated that it will experience greater job losses compared with other subsectors, with 73 percent stating that decreased exports will lead to job losses, according to an agribusiness survey report released by the China-Australia Chamber of Commerce (AustCham China) on Wednesday. 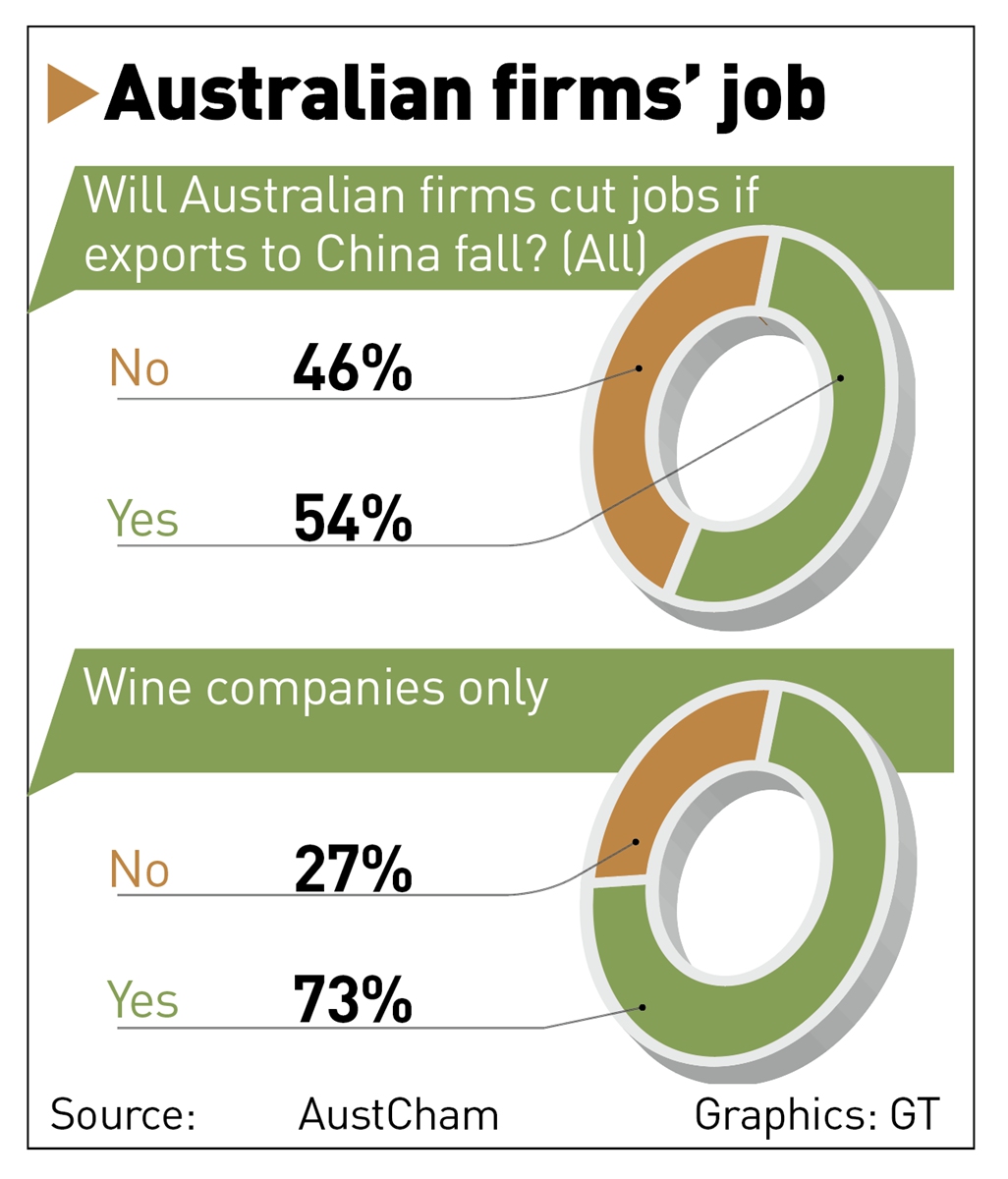 "Our members are fearful of significant job losses to come, particularly in the wine industry, as Chinese imports from Australia are curtailed," noted Nick Coyle, CEO of AustCham China.

Even before the recent deterioration of bilateral relations, Australian agribusinesses were facing significant challenges. Almost half of the respondents indicated that it would be difficult to diversify their operations to other countries, with the wine industry having more than half of its respondents stating that concern, according to the survey.

The survey was based on responses from 46 Australian businesses in the wine, grain, livestock and other segments that were received from September 25 to November 18.

China imposed provisional anti-dumping measures in the form of deposits on wine imported from Australia, with deposits ranging from 107.1 to 212.1 percent, according to a MOFCOM statement on November 27. The move followed an application from Chinese producers that have suffered substantial damages due to significant wine dumping.

China is Australia's No.1 wine-export market by value. China imported A$3 billion ($2.2 billion) worth of Australian wine over the first three quarters of this year, up 4 percent year-on-year, media reported.

Apart from wine, China has been probing Australian barley over the past few months in line with relevant laws, regulations and international practices.

Qian Feng, director of the research department at the National Strategy Institute at Tsinghua University, told the Global Times Wednesday that the Morrison government's naive and improper handling of ties with China has dealt a heavy blow to its industries and export businesses, with the latter having no choice but to pay high costs.

"For its economic recovery in the post-COVID-19 era, Australia should cement ties instead of taking risks of losing the Chinese market, which it has been heavily dependent on for years," Qian said.

From being the first to ban Chinese technology giant Huawei from its 5G network to pressing China for a probe into the origin of the coronavirus, Australia has been jumping on the US bandwagon against China.

"It is the Australian side that has been politicizing economic, investment and technological issues, and discriminating against Chinese companies in violation of market economy principles and international trade rules. It has gone far down the wrong path," Wang Wenbin, a spokesperson for China's Foreign Ministry, told a regular briefing on Tuesday.

A majority of respondents in the survey believed there has been a decrease in business confidence in the past year and the deterioration of Australia-China trade relations is the No.1 risk to business.

Despite the intensifying trade tensions, experts said that iron ore trade between the two countries is a "red line" and it will likely remain unaffected.

Yu Lei, chief research fellow at the research center for Pacific island countries of Liaocheng University in East China's Shandong Province, told the Global Times that compared with the value of iron ore trade of A$60-90 billion per year, the current damage to the wine and other agricultural sectors worth more than A$15 billion won't have a huge impact on overall bilateral trade this year.

"There are knock-on effects from FIRB decisions; as the FIRB tightens and the relationship deteriorates, more roadblocks will be thrown up for Australian companies investing and trading in China," noted Tom Luckock, vice-chair of AustCham China and the Chamber's Food and Agribusiness Industry Forum.

"Because of these discriminatory actions, Chinese companies' investments in Australia have nosedived since 2017, and the number last year decreased by 85 percent compared with 2016," said the FM spokesperson.