Fears for 100 after Lagos tower collapse 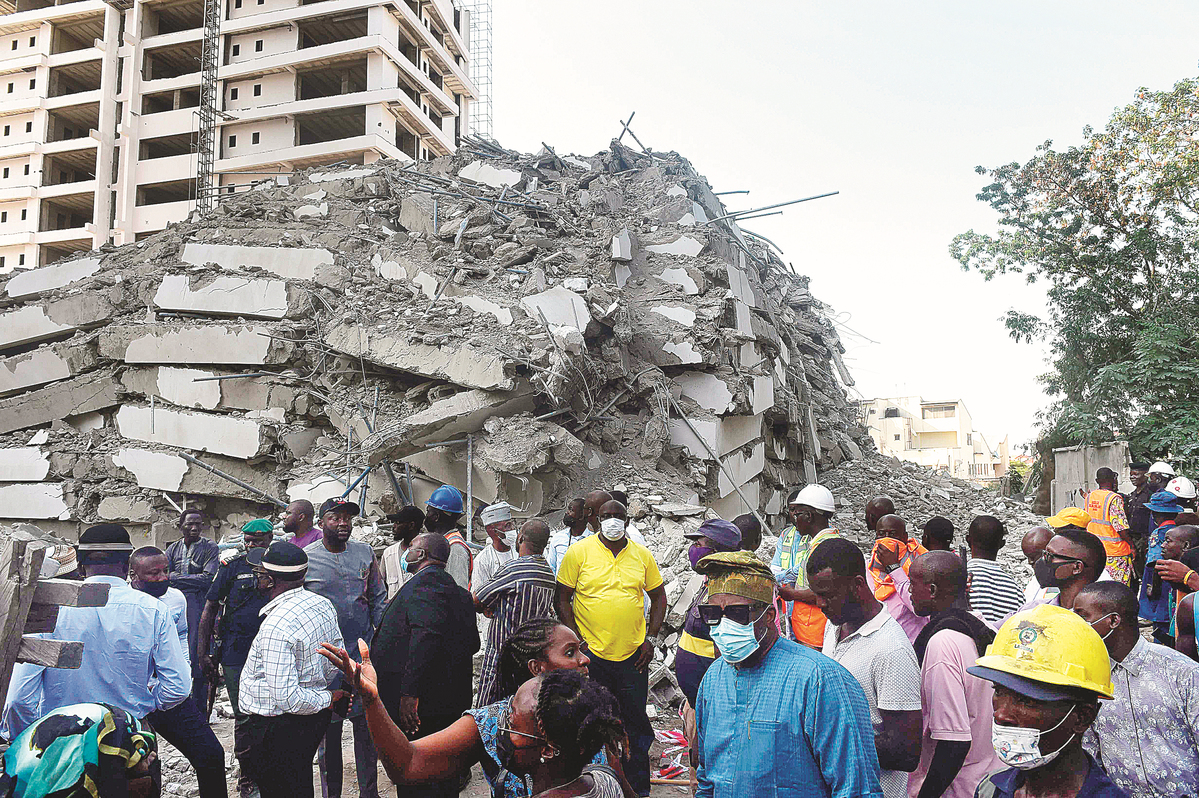 Crowds gather at the site where a building under construction collapsed in the Ikoyi district of Nigeria's biggest city, Lagos, on Monday. (Photo: AFP)

LAGOS, Nigeria－Fears are held for as many as 100 people after a high-rise building collapsed in Nigeria's commercial capital Lagos, with at least six deaths counted by Tuesday.

The building had been under construction when it crumbled on Monday, trapping workers under a pile of rubble.

State emergency services official Olufemi Oke-Osanyintolu said a search and rescue effort was proceeding at the site of what was to be a luxury residential tower.

"Currently all responders are on the ground as search and rescue is ongoing," Oke-Osanyintolu said in putting the deaths so far at six.

Four people were rescued and three more were treated for minor injuries, he said.

Building collapses are frequent in Africa's most populous country, where regulations are poorly enforced and construction materials often substandard.

Witnesses say up to 100 people were at the site in the city's Ikoyi area.

Nigerian President Muhammadu Buhari has called for rescue efforts to be stepped up as emergency services swing into action.

The collapsed building was part of three towers being built by private developer Fourscore Homes, which promised in a client brochure to provide "a stress-free lifestyle, complete with a hotel flair". The cheapest unit was selling for $1.2 million.

Calls to numbers listed for Fourscore Homes and the main building contractor did not ring through.

Emergency services are "on the site, battling to save the lives of those under the rubble," Gbenga Omotoso, a spokesman for the governor, said in a statement.

Wisdom John, 28, a bricklayer, said he escaped with just a few cuts because he had been on the ground floor when the building collapsed into a pile of concrete, its floors sandwiched together.

"There were more than 50 working today and the manager too," he said while sitting in an ambulance getting treated. "We just ran out."

The Ikoyi area is one of the wealthier residential and business districts in Lagos, Nigeria's densely populated business capital.

Near the site, soldiers kept back a crowd of onlookers watching the rescue operation.

Dozens of angry residents and workers had gathered to help out soon after the collapse, many crying and voicing frustration over the slow pace of the rescue efforts.

Lagos state's police commissioner Hakeem Olusegun Odumosu said it was still too early to determine the cause of the collapse.

Four other construction workers at the site said dozens of their colleagues were inside when the building crumbled.

Taiwo Sule, 21, said he had seen five bodies on top of the building, and he had tried to help recover them.

Governor Babajide Sanwo-Olu said he had ordered an investigation into the incident.