WORLD Fears for 'Super Saturday' as pubs reopen in England

Fears for 'Super Saturday' as pubs reopen in England

Pubs in England reopen on Saturday for the first time since late March, bringing cheer to drinkers and the industry but fears of public disorder and fresh coronavirus cases. 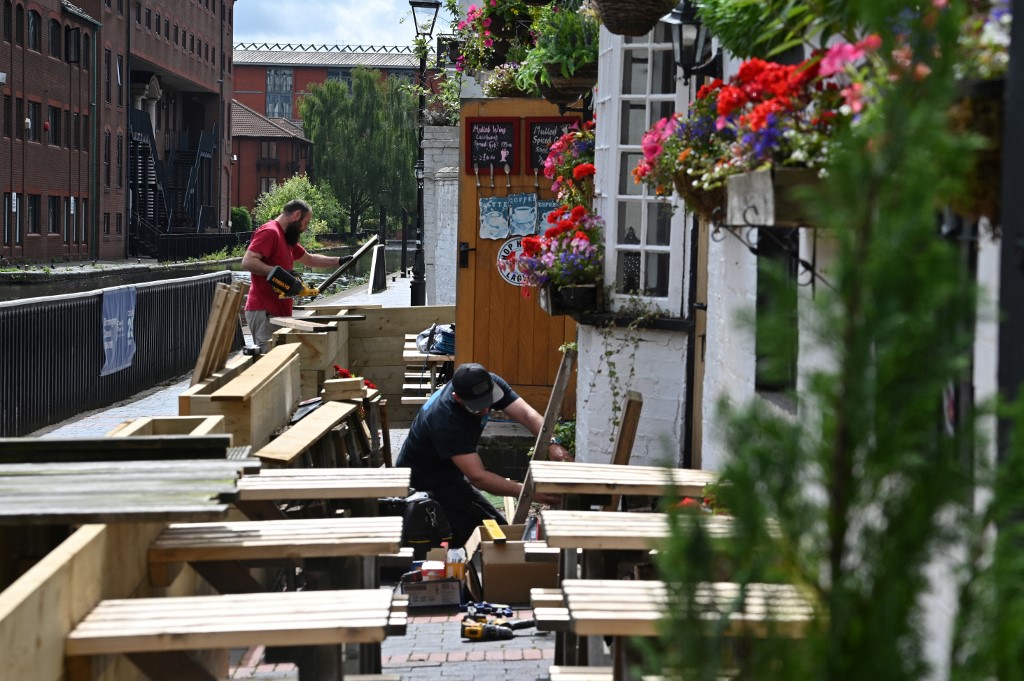 Workers prepare an outdoor seating area at a pub along the Old Main Line canal in Birmingham on July 2, 2020. (Photo: AFP)

The move is part of a wider government plan to relaunch the hospitality, tourism and culture sectors and help the UK economy recover from more than three tough months of lockdown.

Restaurants, cinemas, galleries, museums, libraries and hairdressers can all welcome back the public, as can hotels, campsites, bed and breakfast, and self-catering accommodation.

Motoring body the RAC predicted the busiest weekend so far this year, with an estimated 10.5 million drivers on the roads, as overnight stays are allowed again.

But the focus of the reopening is on pubs, which have played an integral part in British social and cultural life for centuries.

"We are all expecting it to be a historic day for the industry," said Clive Watson, founder of the City Pub Group, which operates 47 pubs in southern England and Wales.

"It's been incredibly tough for us and for our customers, so we hope this can provide a much-needed boost."

The first nationwide closure of pubs since the Great Plague of 1665 has contributed to a record slump in beer sales and compounded existing financial difficulties in the sector.

Takings could be up nearly 75 percent to £210 million ($262 million, 233 million euros), according to the Centre for Economics and Business Research, a think-tank.

It predicted 6.5 million customers -- 1.5 million more than a usual weekend.

The British Beer and Pub Association said it hoped 80 percent of England's 28,000 pubs could open but it could take 12 months or more for trade to return to normal.

"If 10 percent of them are profitable, that will be a surprise to us," said chief executive Emma McClarkin, warning up to 18,000 were at risk of closure by the year end.

Some pubs are adopting a wait-and-see approach, as several surveys indicated many people were hesitant about mixing in larger groups.

In Newcastle, northeast England, where pubs are normally packed at weekends, just one in three city centre pubs, bars and restaurants will be open, the local council said.

"We are genuinely concerned that this could be a day of total chaos for the pub trade," the owners of the popular Tyne Bar on the city's Quayside said in a tweet.

"We've decided it's not worth the risk."

Government guidelines insist on "minimum contact" between staff and customers, with table service only. Drinkers will also have to give contact details in case of any outbreak.

Britain has had some 44,000 deaths in the outbreak -- the third-highest in the world -- and concern remains about a second spike of infections as the lockdown is eased.

Pubs in Northern Ireland opened on Friday. A partial reopening is slated for July 13 in Wales and July 15 in Scotland.