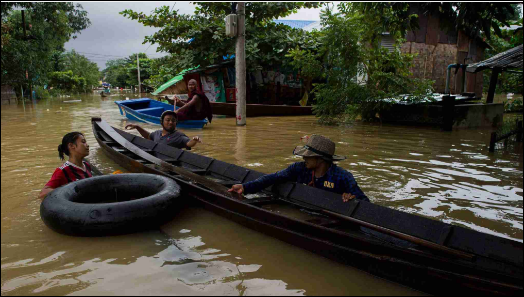 Fears that embankments could burst under fresh rains mounted Wednesday in flooded southeastern Myanmar, where more than 130,000 people have been forced to flee their homes and a dozen others killed, according to AFP.

A vast area of farmland across four provinces lies under muddy water with rescue teams trying to reach villages by boat to provide food to those who are unable or refuse to leave their homes.

Above the town of Madauk in Bago region, floodwaters are only inches from the top of vulnerable embankments that are so far holding fast, but locals are afraid that fresh monsoon rains could spell disaster.

"If this embankment doesn't hold firm against the next flood, many more villages will be at high risk," rescue team leader Hlaing Min Oo told AFP as he oversaw a chain of volunteers loading a boat with food destined for marooned flood victims."For the moment, there's little chance that the water levels will go down."

Evacuation orders are still in place across Bago, Karen, Mon and Taninthari provinces with 36 dams and reservoirs overflowing, according to state media.

Many are either unable to escape to shelters or are opting to stay in their flooded homes, hoping that water levels will start to recede.

AFP reporters travelled several hours to reach Maubin village in Shwe Kyin district with the relief boat, passing multiple settlements of half-submerged thatched homes, many with trapped residents at upstairs windows looking out at the inundations.

A monastery run by five monks was serving as a collection point for donated rice, noodles and biscuits in Maubin, a village of 108 households.

"Our house is just beside the river bank so we're trying to move somewhere higher," 54-year-old Ohn Myint said, pointing to the hills a couple of kilometers away. Farmer and fisherman Win Kyu, 40, is primarily worried about his fields that now lie completely under water.

"We experienced flooding like this back in 2000. This year is the worst since then," he said. "If this goes on, people will struggle to make a living."

Myanmar is only just entering peak monsoon season but it is not suffering alone. Heavy rains this year have lashed much of the Mekong region with a dam in neighboring Laos collapsing last week, destroying several villages and leaving scores of people missing.