WORLD Fears of intimidation, violence as Bangladesh set to vote

Fears of intimidation, violence as Bangladesh set to vote 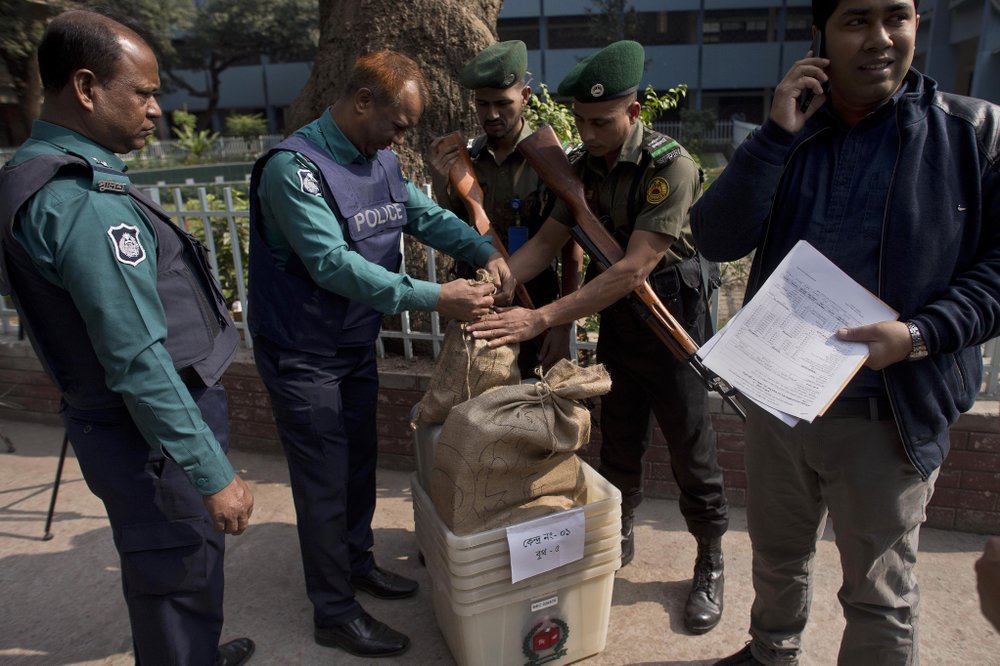 As Bangladeshis get set to vote in Sunday’s parliamentary elections, there are fears that violence and intimidation could keep many away from the polls, including two opposition candidates who said police had barricaded them inside their homes.

Under the decade-long leadership of Sheikh Hasina, whose ruling party hopes to retain power in the elections, Bangladesh’s economy has grown by more than 6 percent annually, lifting millions out of extreme poverty.

Hasina, 71, has been internationally lauded for sheltering the more than 700,000 Rohingya Muslim refugees who streamed across the border into Bangladesh to flee what many call a genocidal campaign by the military in their native Myanmar.

At home, she’s developed a strong persona as an iron lady after her fierce response to a 2016 attack by radical Islamists on a cafe in Dhaka’s diplomatic quarter in which 20 hostages, including 17 foreigners, were killed.

But her tenure also has included allegations of mass arrests and jailing of activists and critics on false charges — so commonplace that a term for them in Bengali, “gayebi maamla,” has been coined — as well as forced disappearances and extrajudicial killings.

Among Hasina’s imprisoned critics is her archrival, former Prime Minister Khaleda Zia, the 74-year-old leader of the Bangladesh Nationalist Party. Zia is holed up in a colonial-era jail in the old part of Dhaka, Bangladesh’s capital, serving a 17-year sentence for mishandling two charitable funds she established while in power.

In the early hours of Friday, Zahiruddin Swapan, a two-time member of Parliament from the BNP, kept The Associated Press on the phone as he attempted to negotiate with security officials whom he said had cordoned off his house to postpone their raid till daybreak.

Finally, Swapan said, he opened the door after a local police chief threatened to break it down.

In Chandpur, an area south of Dhaka, Sheikh Farid Ahmed, a BNP candidate contesting a seat held by a former foreign minister in Hasina’s Cabinet, told the AP on Saturday that he had been blockaded in his home for days after police and Awami League activists took positions around his 7-acre compound.

“They have threatened me not to go outside,” Ahmed said. “Police are there and the ruling activists are carrying homemade arms. They allow nobody from outside to meet me.”

Since Bangladesh’s election commission scheduled the polls in early November, about 15,000 BNP leaders and activists have been arrested, according to party vice chairman Shaukat Mahmood.

“We hear from our supporters, ‘What’s the point? I’m going to lose my life.’ Voters are afraid — that’s a major challenge for us,” Mahmood said Saturday from Zia’s former office at BNP headquarters.

The violence hasn’t been one-sided, according to H.T. Imam, a Hasina adviser and co-chairman of the Awami League Election Steering Committee, who accused activists in Zia’s party and its ally Jamaat-e-Islami of attacking ruling party members.“Every moment we are getting information about attacks on our leaders, activists and supporters by the BNP-Jamaat men. Hundreds of our campaign offices have been attacked,” Imam told reporters earlier this week.

Retired Maj. Gen. Md. Abdur Rashid, whose think tank studies Bangladesh security issues, dismissed the idea that the arrests were politically motivated, saying instead that they were the result of outstanding warrants in the normal course of the law.

“I haven’t seen any police going after anyone, but the EC (Election Commission) has not given impunity to criminals who also just happen to be political activists or candidates,” Rashid said.

The BNP led the campaign for the deployment of more than 600,000 soldiers, border patrol, paramilitary and police officers who have fanned out across the country in advance of the vote.

Bangladesh’s telecommunications regulator had cut off mobile internet services by Saturday evening across the country, and the services were expected to be unavailable through election day. Wi-Fi and broadband continued to operate.

The government has also banned the use of vehicles on Sunday in Dhaka, except by election observers and journalists, so the city has emptied in recent days as people travel to their home districts to vote.

Earlier in the week, the Awami League led massive rallies through Dhaka. The opposition says its requests for rallies were denied.

Both sides hope to avoid a repeat of the 2014 elections, in which 22 people were killed in post-election violence. Turnout for that vote — boycotted by the BNP — was just 22 percent.

Dhaka-based employee Amzad Hossain said he was confident about the security arrangement in metropolitan areas, but wasn’t sure about rural Bangladesh, where many of the country’s 40,000 polling centers will go largely unguarded and unobserved.

“In cities, there are fewer possibilities of clashes and violence,” Hossain said, “but in rural areas where communication is not so developed, it would be impossible for so few officers to ensure the execution of laws in the vote centers.”