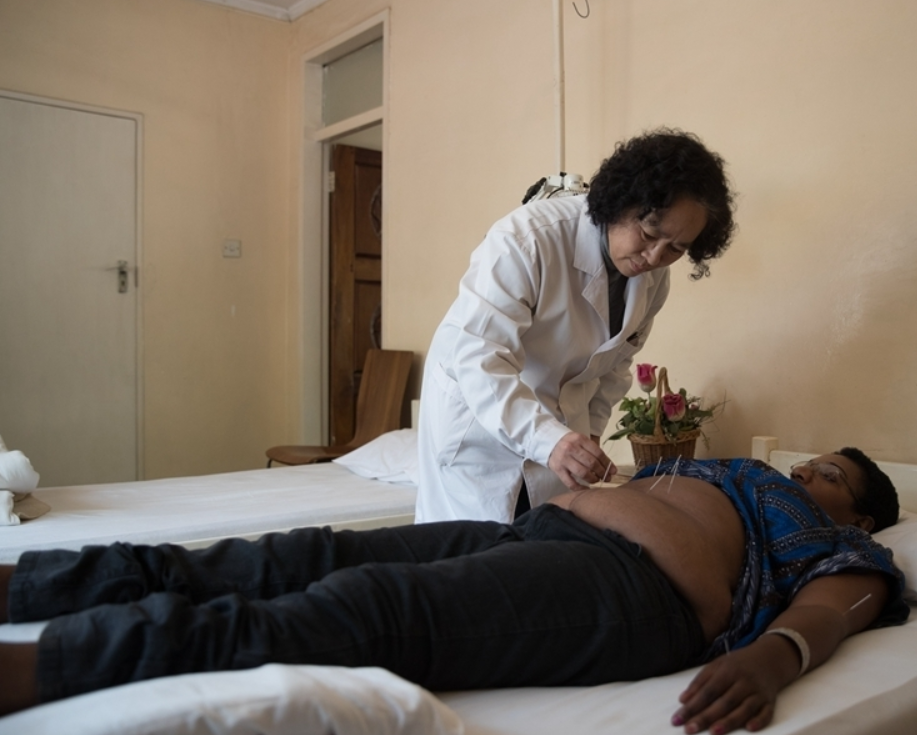 LUSAKA, Oct. 1 (Xinhua) -- Taonga is a seven-year-old girl in Lusaka, the Zambian capital, who intends to pursue a career in medicine when she grows up.

"I want to study medicine especially in China because I want to save people. I also want to do acupuncture because it is very effective," she told Xinhua recently.

The story behind Taonga is that she was born after her mother underwent acupuncture treatment at one of the private Chinese surgeries in the city.

Taonga's mother, 53-year-old Thenjiwe Mwale, was first introduced to acupuncture in 2009 when she visited Feng Kehong, who runs Zhong Yi Surgery in the city.

"I came here after being told by my young brother because I desperately wanted a baby after failing to conceive for the 19 years I had been in marriage then. When I came here she did acupuncture to flash out everything in my body and the following year (2010) I was pregnant," she said.

According to her, acupuncture is a very important way to conduct treatment as it has proven to be effective, adding that she has recommended a lot of family members and friends to the Chinese acupuncturists.

"I have seen people with various ailments such as heart diseases, diabetes, high blood pressure get healed here," she added, hailing acupuncture as a very effective process

For Augustine Mwale, a Lusaka-based businessman, he is alive today because of the acupuncture treatment he was given by Feng.

"I had a severe heart problem, diabetes and asthma and I was almost dying," he said, adding the Chinese doctor did wonders on him and he was fine now.

He said he has been recommending many people to seek acupuncture treatment, who have reported positive outcomes.

Aaron Mushanga, another resident of the Zambian capital, is also full of praises after undergoing acupuncture treatment.

He said at first he was apprehensive to undergo acupuncture as he did not want needles pricked in his body but added that after a few sessions he came to like the treatment.

For Feng, she is happy that a lot of people are being helped through acupuncture in Zambia and that she has seen a rising enthusiasm for the treatment method.

According to her, a lot of diseases could be treated through acupuncture and that she has seen this happen over the years.

Recalling the incident when Thenjiwe came to her when she wanted a baby, Feng said she was hesitant to help her because of her age and health condition then.

"But in the end I told her that I will try acupuncture and within few months she came back and told me she was pregnant," she said.