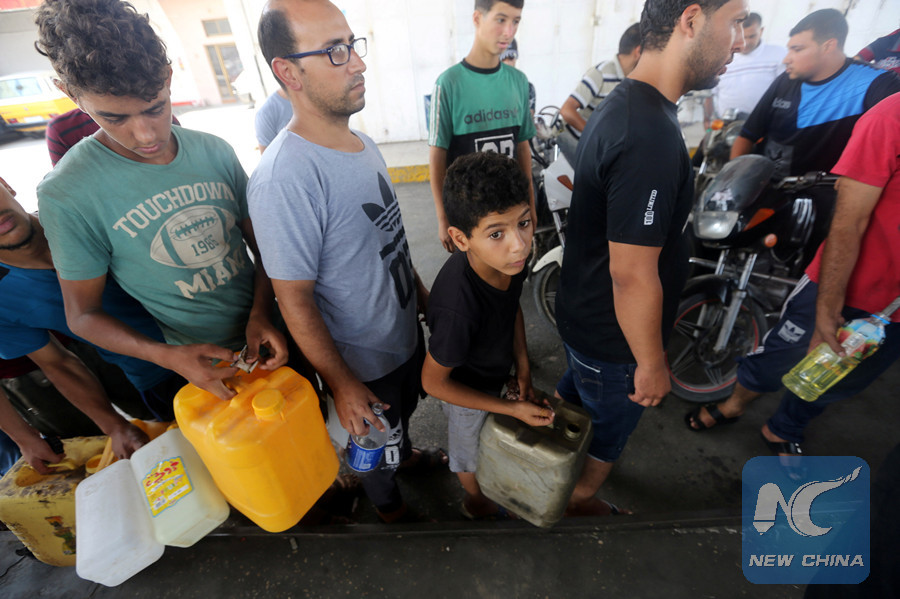 Palestinians wait to fill containers with fuel after Israel stopped the transfer of fuel and cooking gas into Gaza, at a petrol station in Khan Younis in the southern Gaza Strip July 17, 2018. (photo: Xinhua / Reuters )

GAZA, July 22 (Xinhua) -- Palestinian trader Hashim Harb is facing a growing shortage of goods at his clothing store in Gaza City after Israel banned the entry of goods into the coastal enclave recently to further tighten its decade-long blockade.

Harb complained that he had run out of several clothes in his shop as all clothing imports have been banned by the Israeli authorities for nearly two weeks.

On July 9, Israel closed the Gaza Strip's main cargo crossing for export and import as part of the measures against Hamas, the Islamic movement that runs the besieged Palestinian enclave.

Only food supplies and medicines are allowed into Gaza through the terminal.

The Israeli government also decided to reduce the area allowed for fishing in the sea of Gaza to 3 nautical miles.

The Israeli decision came in response to the arson kites and helium balloons flying from Gaza into Israel, which caused large fire and losses in the Israeli territory.

The sanctions came at a time of escalating humanitarian crisis in Gaza, created by a blockade imposed by Israel since Hamas violently took over the territory in 2007.

"The Israeli procedures have undermined the remaining trade movement in the Gaza Strip markets," Harb, in his mid 30's, told Xinhua. "We had a deal to import shipment of goods from China and the shipment was delayed due to fears of being damaged or seized in Israel."

The Israeli blockade has further pushed Gaza's 2 million populations into poverty. Economists in Gaza point out that extreme poverty rate hit 53 percent in 2017 up from 37 percent in 2011.

A recent World Bank report has also said the Gaza Strip ranks third across the Arab region in terms of poverty rate after Sudan and Yemen.

Maher al-Tabaa, media official in the Gaza Chamber of Commerce and Industry, said Israel has reversed the Gaza Strip to the first days of the blockade, with the number of daily trucks dropping to fewer than 70 per day today carrying only basic food and medical supplies.

"These measures have serious repercussions on many economic sectors in the Gaza Strip, especially the importers whose goods have been seized by the Israeli side, causing heavy losses," he told Xinhua.

Al-Tabaa pointed out that the construction sector in Gaza is the most affected by the measures, noting that construction work of hundreds of projects have completely stopped.

"The halt of the industrial sector is extremely serious ... this threatens to increase unemployment rate in Gaza, which is the highest worldwide, exceeding 49 percent," he said.

Economists in Gaza said about 450 industrial facilities have been closed since the beginning of this year, adding that this number is expected to increase due to Israel's new measures.

Israel said it will not remove its restrictions until arson balloons released by Palestinian protestors during the mass anti-Israel demonstrations, known as the Great Marches of Return, stop completely.

At least 145 Palestinians, including 20 children, have been killed during the ongoing rallies that kicked off on March 30 demanding for putting an end to the Israeli blockade.