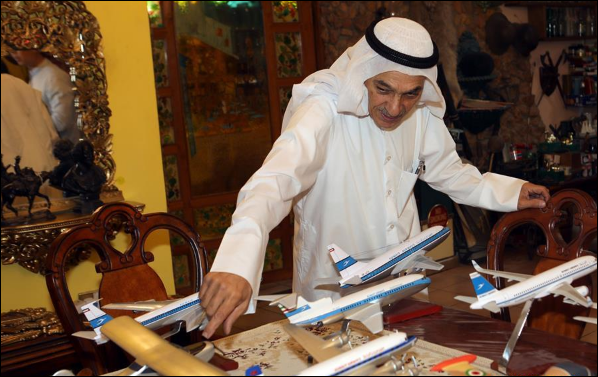 Adel Alsadoon, a famous Kuwaiti astronomer and historian, shows his collection of aircraft models in his house in Ahmadi Governorate, Kuwait, on Sept. 20, 2018. (Photo: Xinhua)

"I would like to go to China to admire China's Five-hundred-meter Aperture Spherical Radio Telescope (FAST), the world's largest single-dish radio telescope," Adel Alsadoon, a famous Kuwaiti astronomer and historian, said in an interview with Xinhua on Thursday.

"The Chinese people had astronomical wisdom thousands of years ago, dividing the sky near the ecliptic into 28 stars, which is still useful for today's astrology observation," he noted.

"Now China has the largest radio telescope, or Tianyan, which is the most advanced telescope in the world and can observe farther and more materials in the universe," he said.

China completed construction of FAST, currently the largest radio telescope in the world, in September 2016.

Currently there is no astronomical research institution in Kuwait, the historian said.

"There is only one astronomical science club composed of dozens of astronomy enthusiasts in Kuwait," he said, noting that there is a long way to go for the country to become a world-class astronomical giant.

Adel Alsadoon is an enthusiast of various aircraft models.

There are more than 250 aircraft models of all sizes in his house, from the first aircraft invented by the Wright brothers to the latest Kuwait Airline aircraft, from the warplanes of the First World War to the Boeing 777. He has been collecting these models for more than 30 years.

"The study of astronomy, especially the space technology, requires not only the state's financial support, but also top talents, huge testing sites and sophisticated laboratories. Like China, the United States and Russia, these countries have advanced aviation technology," he said.

"We are very happy that China is actively conducting space research, and we can also enjoy these scientific and technological achievements, such as China's Beidou navigation system," he said happily.

Alsadoon is also a collector. His house is a small museum with collections from all over the world, including more than 10,000 books, 5,000 perfume bottles, and more than 1,000 cartoon characters and toys, some of which are from China.

He said he is very pleased with the fact that relations between Kuwait and China are strengthening.

"The Kuwaiti emir visited China in early July and signed cooperation agreements with China, which provides an opportunity for cooperation between Kuwait and China," he said, noting that "in the future we hope to participate in more space science and technology projects of China."