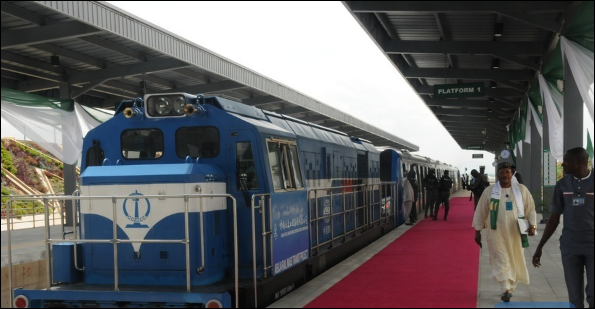 For Victor Ikure, working as a train operator for the newly commissioned light rail in Nigeria's capital of Abuja is almost a dream come true.

The 28-year-old Nigerian had a dream of playing an important role in the growth of the transport sector in his country when he bagged a degree in transport management technology from a local college two years ago.

"Working here is a stepping stone for me, and it is taking me closer to my dream," said Ikure, who currently works at the Abuja Metro Station, the hub of the light rail transportation network commissioned on July 12.

He is one of more than 120 local people hired and trained to manage Lot 1A and Lot 3 of the light rail that was completed in December by the China Civil Engineering Construction Corporation (CCECC).

Although he learned transport management technology in the college, Ikure had neither operated a train before nor had basic knowledge of how it worked until he was hired by the Chinese firm and was trained by CCECC for two months before becoming a train operator.

"I had the general knowledge and overview of road transportation, but I never had the opportunity to learn about the railway and use systems as complex as this," he told Xinhua.

"It was when I joined CCECC that I got to learn so much here. I never imagined that I could get a job here to work as a train operator."

Many others like Ikure now have the right exposure in their areas of specialization, having got trained in various departments of the train service, including signal and communication, train driving and track maintenance.

The Chinese firm plans to hire and train at least 1,000 people to work on the light rail network when it begins full operation later, according to Yang Qiulin, an operation officer of the CCECC in Abuja.

The 45-kilometer light rail commissioned is the first phase of Abuja mass transit project which will have six lines or lots on completion, with a total length of 290 kilometers, offering intra-city shuttle service and connecting Abuja's satellite towns into the metropolitan transport.

Only three stations have been functional so far, though nine others have been completed on the Lot 1A and Lot 3 parts of the project, while the operators await more rolling stock from China.

Abuja, with a population of 4 million, is a relatively new city in Nigeria, but one of the fastest developing cities in Africa.

Since its commissioning by President Muhammadu Buhari in July, the light rail network has opened more opportunities to local people.

It is also worthy of note that many more businesses may spring up along the rail corridor sooner than expected.

Mustapha Malumbe, an assistant director in charge of rail operations at the Federal Capital Territory Administration, told Xinhua that an arrangement made by the authorities to collaborate with transport investors had yielded a good result and provided opportunities to local transporters.

Some of the local transporters have started benefitting from the light rail operation already, Malumbe noted.

This has also helped in solving the issue about accessibility, which earlier posed as a major challenge to the light rail operation, he said.

"They have their buses or cars, and they come around to pick passengers at the arrival of the train. The accessibility to the station is not much of a problem for now because of this arrangement," Malumbe said, adding the light rail was designed in a way that connects all parts of Abuja, unlocking business opportunities in and around its 12 satellite towns.

"The construction of this light rail provides a lot of opportunities. And we are even excited that its use will open up new towns and boost economic activities along its corridor," Sheriff Adamu, a local taxi driver said.

Adamu said although he observed not too many passengers have used the train so far, perhaps due to some technical challenges, he has made new customers and his business has been better because of it.

"As you can see, this Abuja Metro Station has a large car park that can accommodate as many vehicles as possible. This is a good business opportunity for us. In the future, we'll have more customers or passengers here than any other part of the Abuja city," he added.