CHRISTCHURCH, New Zealand, Feb. 22 (Xinhua) -- A memorial service was held on Monday in New Zealand's second largest city of Christchurch to mark the 10th anniversary of a violent and destructive earthquake that claimed 185 lives spanning more than 20 nationalities, including 24 Chinese students. 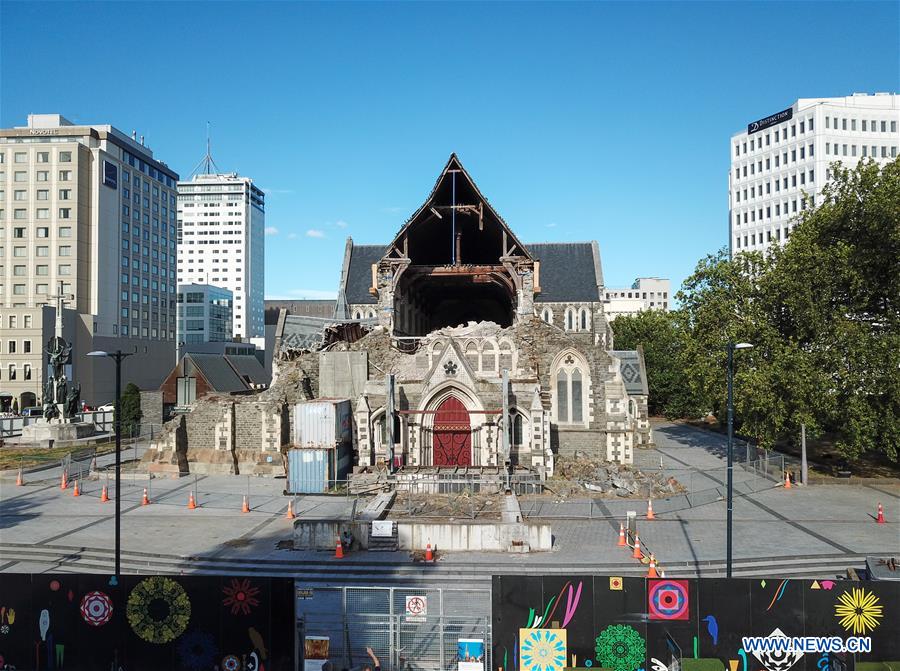 Photo taken on Feb. 21, 2019 shows the remains of a church damaged by earthquake in Christchurch, New Zealand. A ceremony was held on Friday in New Zealand's second largest city of Christchurch to mark the 8th anniversary of a devastating quake that claimed 185 lives spanning more than 20 nationalities, including 23 Chinese students. A 6.3-magnitude quake struck the city on Feb. 22, 2011, with a depth of only 4 km. Then-Prime Minister John Key described the disaster as "New Zealand's darkest day." (Xinhua/Guo Lei)

A 6.3-magnitude quake struck the city on Feb. 22, 2011, with a depth of only 4 km. Then-Prime Minister John Key described the disaster as "New Zealand's darkest day."

"The toll could not have been more significant, and daily reminders made it harder -- a fractured landscape, aftershocks, struggling friends and neighbors, and children with deep and unseen scars," she told the memorial service.

"Ten years on there will be people still living their daily lives with the long shadow of that day," Ardern said.

Hundreds of people with solemn faces threw flowers in the Avon River, or placed bunches of flowers at the wall of the Canterbury National Earthquake Memorial in Christchurch's central city where many buildings had crumbled in a flash during the quakes ten years ago.

People hugged each other, people who lost their loved ones in the quakes were sobbing.

The earthquake and aftershocks caused substantial destruction to Christchurch in 2011. Statistics showed more than 1,200 commercial buildings were destroyed, and around 90 percent of residential houses were damaged to varying degrees.

According to the Christchurch city center's reconstruction plan, there are 16 key projects, including a brand-new bus hub, world-class cricket stadium and an "innovation area" that have been put into use and more and more companies and stores have returned to the city center.

Restoration work on the Christchurch Cathedral began last year, seven years after it was damaged in the disaster. The 132-year-old cathedral withstood violent earthquakes in 1881, 1888, 1922, 1901 and Sept. 4, 2010. The restoration will cost about 108 million NZ dollars (79 million U.S. dollars).