WORLD Feature: US young voters fired up in 2020 presidential elections

Feature: US young voters fired up in 2020 presidential elections

WASHINGTON, Nov. 14 (Xinhua) -- Jonathan, 24, a student in Washington D.C. who declined to give his full name, told Xinhua that he voted for U.S. President Donald Trump in the elections earlier this month. 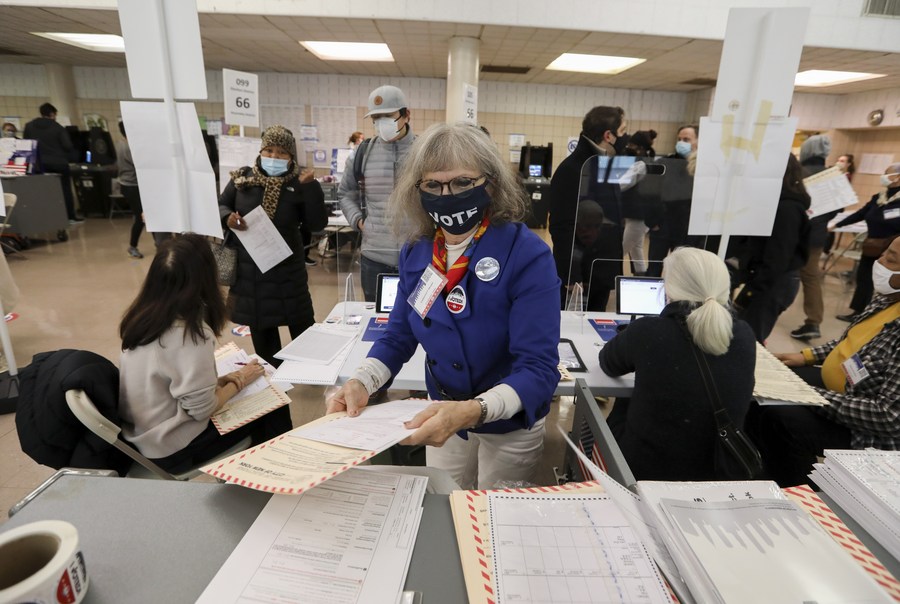 In contrast, the majority of voters under age 30 cast their ballots for Democratic challenger Joe Biden.

Across the nation, young voters backed Biden by a margin of 25 points in the 2020 elections, and that was a key factor for many battleground states, according to the Center for Information and Research on Civic Learning and Engagement (CIRCLE) at Tufts University.

Young voters now make up a huge chunk of the electorate, and the Pew Research Center has found that millennials (born between 1981 and 1996) and Generation Z (born after 1996) comprise 37 percent of eligible voters in the United States.

Young voters were fired up this election season, with nearly 53 percent casting their ballots early - nearly 10 percent more than in 2016, according to data from CIRCLE.

In some critical Electoral College battleground states, CIRCLE's estimates indicate that youth votes may have made the difference for Democrats.

For instance, in Georgia an estimated 21 percent of votes came from young people, who supported Biden over Trump by 18 percent, netting Biden 187,000 votes.

But it remains unknown whether young people will be as amped up to go out and vote in 2024.

Indeed, due to the coronavirus pandemic and government-imposed lockdowns, many young people have for months been at home, bored and glued to U.S. gloom-and-doom news reports.

Some observers, such as Darren, a public school teacher near Washington D.C. who also declined to give his full name, believes that once things get back to the way they were before the virus, young people will eventually go back to their usual pursuits. Those include exams, internships, socialization and the pursuit of intimate relationships, he told Xinhua.

Brookings Institution Senior Fellow Darrell West said that it takes a lot to mobilize the youth vote "because they have so many other things going on in their lives."

"Obama was able to do it and Trump turned out the young vote for Biden because Trump did so many things young people hated," West said in an interview with Xinhua.

"Younger voters are very worried about healthcare, the environment... and climate change. All those issues work to the advantage of Democrats because young people tend to be more liberal than the rest of the country," West said.

Another top concern of young voters in the 2020 elections was racism in the United States - a sentiment that did not bode well for a president whose critics accuse him of being racist.

CIRCLE's analysis of a recent poll by the Associated Press found that young people were more likely than other age groups that say that racism is a major problem in the United States. Among some of those polls, the issue drove how they voted, the poll found.