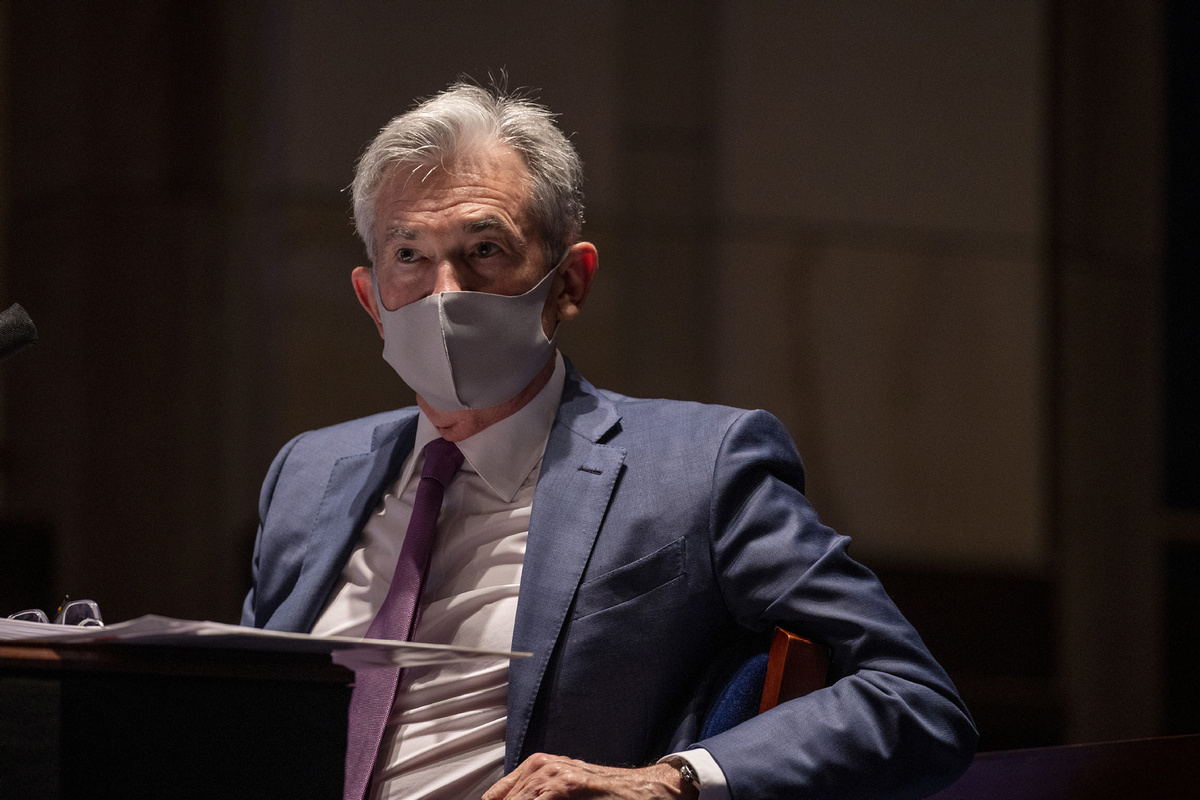 Federal Reserve Chairman Jerome Powell, wearing a face mask, testifies before the House of Representatives Financial Services Committee during a hearing on oversight of the Treasury Department and Federal Reserve response to the outbreak of the coronavirus disease (COVID-19), on Capitol Hill in Washington, June 30, 2020. [Photo/Agencies]

Rising employment and consumer spending underscore the strength of the US economy, but the nation cannot fully recover until the novel coronavirus pandemic is contained, said Federal Reserve Chairman Jerome Powell on Tuesday.

The Fed chief said that continued government intervention — including low interest rates, bond-buying, small-business lending and aid for state and local governments — will therefore be needed to support an economy weakened by COVID-19, he said.

"The path forward for the economy is extraordinarily uncertain and will depend in large part on our success in containing the virus," Powell said in prepared remarks submitted to the House Financial Services Committee.

"A full recovery is unlikely until people are confident that it is safe to re-engage in a broad range of activities," he said. "The path forward will also depend on the policy actions taken at all levels of government to provide relief and to support the recovery for as long as needed."

As part of the $2 trillion relief bill approved by Congress in March and signed into law by President Donald Trump, Powell must provide quarterly updates to Congress on programs created to boost the economy. He appeared Tuesday at the committee's first oversight hearing.

The US Department of Labor said 2.5 million jobs were added in May as the economy rebounded. Many analysts expected the economy to lose millions of jobs.

"We have entered an important new phase and have done so sooner than expected," Powell testified. "While this bounce back in economic activity is welcome, it also presents new challenges — notably, the need to keep the virus in check."

He warned that reopening the economy, especially in commercial activity that requires close human contact — such as restaurants and retail sales — increases the risk of new infections, as evidenced by the uptick in new cases in the South and Southwest.

US Treasury Secretary Steven Mnuchin also testified at the hearing. Both men sat behind clear plastic shields at separate tables. Powell wore a face mask throughout the hearing, but Mnuchin did not wear a mask while responding to questions from committee members.

The Federal Reserve has created nine programs to provide emergency lending to companies, cities and states. The Treasury has provided $195 billion to cover losses.

"We're strongly committed to using these programs, as well as our other tools, to do what we can to provide stability, to ensure that the recovery will be as strong as possible and to limit lasting damage to the economy," Powell said.

The Federal Reserve's Main Street Lending Program is intended to provide loans to small and medium-sized businesses that were in good financial shape prior to the pandemic.

Such businesses typically depend on bank lending because they're too small to tap the bond or equity markets.

The Fed's program can purchase up to $600 billion in loans.

"Additionally, the Federal Reserve recently sought feedback on a proposal to expand the Main Street program to include loans made to small and medium-sized nonprofit organizations, such as hospitals and universities," Powell said in his remarks.

"Nonprofits provide vital services around the country, and the program would likewise offer them support."

Congress is debating what additional programs are needed to meet the high unemployment created by the government-enforced shutdown of the economy to curb the spread of COVID-19.

Mnuchin said he planned to work in a bipartisan manner on any new spending measures signed into law in July.

"We would anticipate that any additional relief would be targeted to certain industries that have been especially hard-hit by the pandemic," he testified.

Powell said commercial banks are participating in the recovery, unlike after the recession caused by the collapse of the subprime mortgage market a decade ago.