U.S. Federal Reserve officials believed that uncertainty surrounding the economic outlook remained "very elevated," with the path of the economy highly dependent on the course of the virus, according to the minutes of the Fed's latest policy meeting released Wednesday. 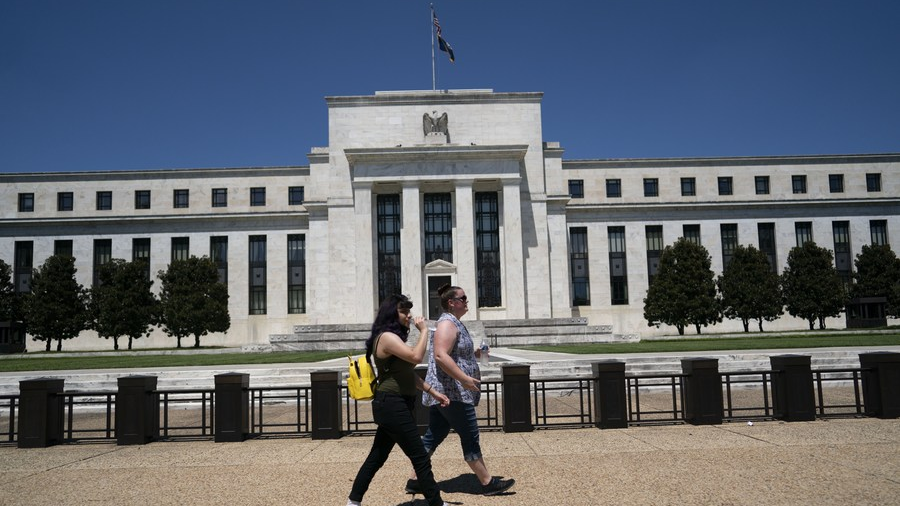 "Several risks to the outlook were noted, including the possibility that additional waves of virus outbreaks could result in extended economic disruptions and a protracted period of reduced economic activity," said the minutes of the central bank's meeting held on July 28-29.

At the meeting, the Federal Open Market Committee (FOMC), the Fed's policy-setting body, kept its benchmark interest rate unchanged at the record-low level of 0-0.25 percent while warning that a recent resurgence in COVID-19 cases nationwide is starting to weigh on economic recovery.

Participants continued to judge that it would be appropriate to maintain this target range until they were confident that the economy had weathered recent events and was on track to achieve the Committee's maximum employment and price stability goals, the minutes said.

"Members agreed that the ongoing public health crisis would weigh heavily on economic activity, employment, and inflation in the near term and was posing considerable risks to the economic outlook over the medium term," according to the minutes.

The minutes also highlighted the need for a new round of fiscal relief, noting that "additional fiscal aid would likely be important for supporting vulnerable families, and thus the economy more broadly, in the period ahead."

An extra 600 U.S. dollars in weekly unemployment benefits expired at the end of July, but Democratic lawmakers and the Trump administration remain deadlocked over the next COVID-19 relief package, with both sides blaming each other for making little progress.

The impasse over the renewal of the expiring programs that mitigated the economic impact of the pandemic threatens to undo the stimulus effect of the programs and exacerbate the economic damage from the lockdown, according to a study recently released by the Peterson Institute for International Economics.

"U.S. policymakers should at least maintain the earlier levels of income support to prevent further induced economic damage. In the current depressed state of the economy, destimulation is a very poor policy choice," the study said.

Eric Rosengren, president of the Federal Reserve Bank of Boston, meanwhile, noted that while the fiscal and monetary stimulus has been significant, it cannot fully offset the economic drain caused by the public health crisis.

"Limited or inconsistent efforts by states to control the virus based on public health guidance are not only placing citizens at unnecessary risk of severe illness and possible death -- but are also likely to prolong the economic downturn," Rosengren said.

The U.S. economy contracted at an annual rate of 32.9 percent in the second quarter as the country grappled with the fallout of COVID-19 lockdowns. A rebound is expected in the third quarter, but recent resurgence of COVID-19 cases, which has hindered some states' reopening efforts, could undermine the prospect of economic recovery.

The total number of confirmed COVID-19 cases in the United States surpassed 5.5 million on Wednesday, with a death toll of over 172,000, according to a tally by Johns Hopkins University. The Institute for Health Metrics and Evaluation at the University of Washington forecasted earlier this month that there will be nearly 300,000 COVID-19 deaths by Dec. 1, based on a current projection scenario.

The latest Fed minutes also showed that Fed officials remain skeptical of adopting the yield curve control policy, which seeks to hold down longer-term interest rates by setting a target yield for one or more specific maturities of government debt.

"Of those participants who discussed this option, most judged that yield caps and targets would likely provide only modest benefits in the current environment," said the minutes, adding that the FOMC's forward guidance regarding the path of the federal funds rate "already appeared highly credible and longer-term interest rates were already low."

The minutes also noted that many of these participants pointed to "potential costs" associated with yield caps and targets.

"Participants noted the possibility of an excessively rapid expansion of the balance sheet and difficulties in the design and communication of the conditions under which such a policy would be terminated, especially in conjunction with forward guidance regarding the policy rate," the minutes showed.

"Banks and other financial institutions could come under significant stress, particularly if one of the more adverse scenarios regarding the spread of the virus and its effects on economic activity was realized," the minutes said, adding that nonfinancial corporations had carried high levels of indebtedness into the pandemic, increasing their risk of insolvency.

There were also concerns that the anticipated increase in Treasury debt over the next few years could have implications for market functioning, the minutes added.

The Committee for a Responsible Federal Budget, a nonpartisan watchdog group, recently estimated that U.S. policymakers have committed trillions of dollars of financial support, which will increase 10-year deficits by 2.6 trillion dollars.