A federal lawsuit filed Friday asks a judge to block an Alabama law that outlaws almost all abortions, the most far-reaching attempt by a conservative state to seek new restrictions on the procedure. 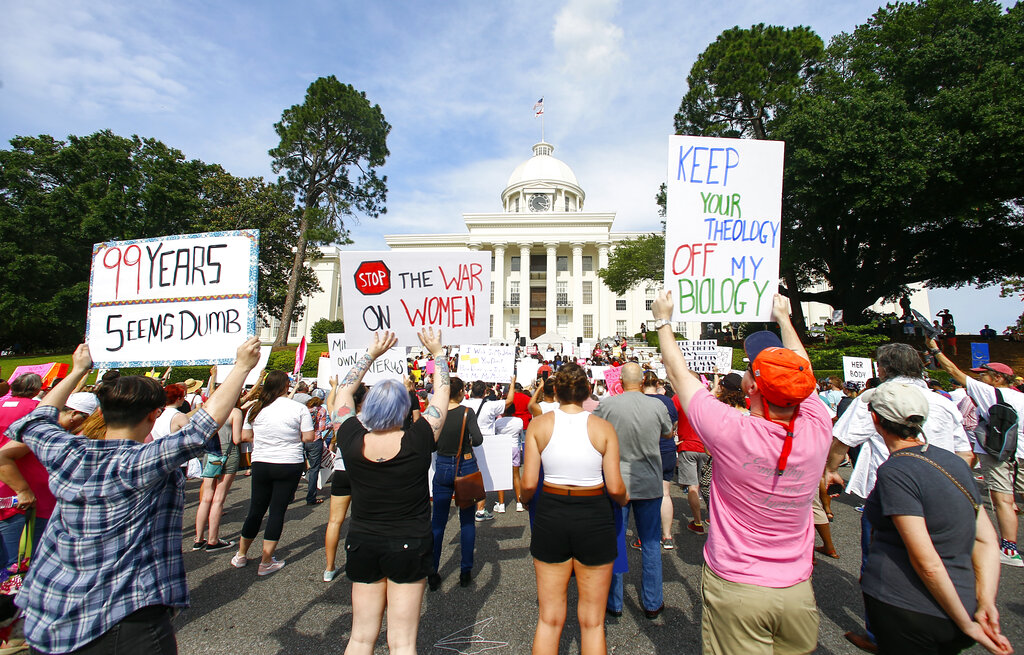 Protesters for women's rights hold a rally on the Alabama Capitol steps to protest a law passed last week making abortion a felony in nearly all cases with no exceptions for cases of rape or incest, Sunday, May 19, 2019, in Montgomery, Ala. (File photo: AP)

The American Civil Liberties Union and Planned Parenthood filed the lawsuit on behalf of abortion providers seeking to overturn the Alabama law that would make performing an abortion at any stage of pregnancy a felony punishable by up to 99 years or life in prison for the abortion provider. The only exception would be when the woman's health is at serious risk.

The law is set to take effect in November unless blocked by a judge.

"Make no mistake: Abortion remains - and will remain - safe and legal in Alabama. With this lawsuit, we are seeking a court order to make sure this law never takes effect," said Randall Marshall, executive director of the ACLU of Alabama.

The lawsuit says the Alabama law to criminalize abortion is clearly unconstitutional and would harm women by forcing them to continue pregnancies against their will.

"For over 46 years — since the Supreme Court decided Roe v. Wade — US law has recognized the fundamental constitutional right to make the profoundly important and personal decision whether or not to terminate a pregnancy," the lawsuit reads.

The plaintiffs in the case are the three Alabama clinics that perform abortions, Planned Parenthood and Dr. Yashica Robinson, an obstetrician who also provides abortions at the Alabama Women's Center in Huntsville.

Robinson told The Associated Press last week the Alabama law has confused and scared patients, with some wrongly thinking abortion was already illegal.

She said the law "further shames" women seeking abortions and "punishes providers like myself, and stigmatizes essential health care."

Emboldened by new conservatives on the US Supreme Court, Alabama is part of a wave of conservative states seeking to mount new legal challenges to Roe v. Wade, the 1973 landmark Supreme Court decision that legalized abortion nationwide.

Governors in Kentucky, Mississippi, Ohio and Georgia have approved bans on abortion once a fetal heartbeat is detected, which can happen as early as the sixth week of pregnancy.

None of the laws has taken effect and all are expected to be blocked by the courts as the legal challenges play out with an ultimate eye on the Supreme Court.

Supporters of the Alabama law have said they expected a lawsuit and to initially lose in court, but they hope the appeal could eventually land before the US Supreme Court.

"Our intent from the day this bill was drafted was to use it as a vehicle to challenge the constitutional abomination known as Roe v. Wade," Rep. Terri Collins, the bill's sponsor, said in a statement Friday.

"This lawsuit is simply the first battle in what we hope will ultimately be a victorious effort to overturn Roe and protect unborn babies from harm," Collins said.

Alabama Gov. Kay Ivey did not have an immediate response on the lawsuit. In signing the bill last week, Ivey said, "to the bill's many supporters, this legislation stands as a powerful testament to Alabamians' deeply held belief that every life is precious and that every life is a sacred gift from God."

Ivey also acknowledged the state ban may be unenforceable "at least for the short term."