WORLD Federal police on highway ahead of caravan

Federal police on highway ahead of caravan 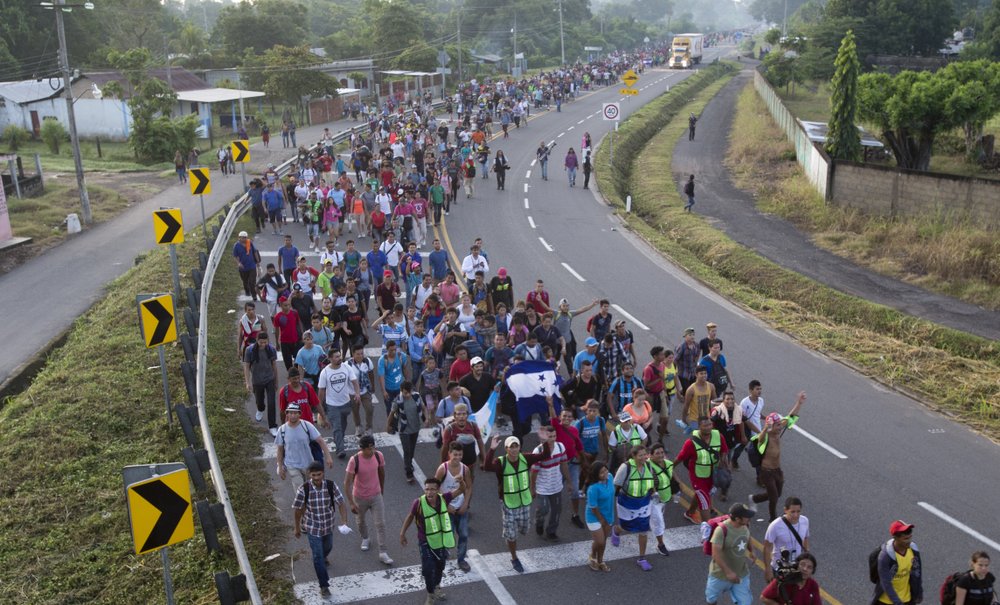 The Latest on the caravan of Central American migrants hoping to reach the United States (all times local):

About 500 Mexican federal police are beside a highway that a caravan of Central American migrants is marching along toward the city of Tapachula.

The majority are on buses with their tactical gear. Others have been buying snacks in convenience stores. After settling in at one post well ahead of the caravan, the police then moved back closer to Tapachula.

Officers who would not identify themselves say their instructions are to maintain the flow of traffic, not to stop the caravan. They were not blocking the highway.

Some 5,000 Central American migrants traveling in the caravan left the border at Ciudad Hidalgo at dawn. Most had circumvented Mexican immigration officials and crossed the Suchiate river from Guatemala on rafts or by swimming.

Three federal police units are escorting the massive crowd of migrants marching across southernmost Mexico and a police helicopter has been flying overhead. It’s not immediately clear if Mexican authorities plan again to try to stop the march, which has swelled to some 5,000 people.

Municipal police in the town of Frontera Hidalgo stood by. City police officer Luis Fernando Mejia Morales said “the instructions are to treat them kindly. They are human beings.”

People in the town were sympathetic to the migrants. Some prepared tubs full of plastic bags of water to give the migrants, who by now are walking under a blazing sun.

A migrant caravan whose numbers swelled overnight to an estimated 5,000 people at the Mexico-Guatemala border has resumed its march toward the U.S. frontier.

The migrants had grown frustrated with Mexico’s attempts to process them and circumvented authorities by crossing the Suchiate river illegally.

They have begun walking out of the border city of Ciudad Hidalgo at first light Sunday morning, headed 10 abreast for their next stop: the city of Tapachula.

It’s not immediately clear where the additional travelers materialized from.

But during a caravan last spring, many migrants who had been working and living at the Guatemala-Mexico border decided to join the caravan when it passed because it was safer to travel together.

Despite Mexican efforts to stop them at the border, about 2,000 Central American migrants swam or rafted across a river separating that country from Guatemala, re-formed their mass caravan in Mexico and vowed to resume their journey toward the United States.

The migrants say they gave up trying to enter Mexico legally because the asylum application process was too slow. They gathered Saturday at a park in the border city of Ciudad Hidalgo and voted by a show of hands to continue north en masse, then marched to the bridge crossing the Suchiate River and urged those still on it to come join them.

The decision to re-form the migrant caravan Saturday capped a day in which Mexican authorities again refused mass entry to migrants on the bridge. Instead they accepted small groups for asylum processing and giving out 45-day visitor permits to some.