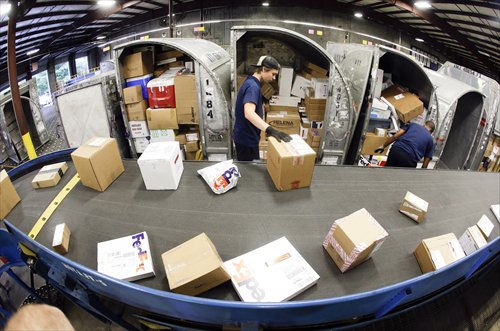 Workers unload packages at the FedEx Express station in Nashville, Tennessee, US in 2014. (Photo: IC)

FedEx's latest statement failed to persuade industry representatives and many Chinese netizens due to the lack of details explaining why it diverted some parcels sent by Huawei. Not taking the Chinese market as an important one could also explain the US delivery firm's dishonest attitude toward the matter, analysts said.

FedEx diverted a customer's parcel to another place without consent and failed to inform them in advance. Such behavior seriously violates Chinese courier delivery regulations and infringes upon the legitimate rights and interests of customers, Ma Junsheng, director of the State Post Bureau, told China Central Television on Sunday.

Although FedEx has denied widespread speculation in China that the US delivery company was working with the Trump administration to interrupt Huawei's normal business activities, Chinese experts said that to regain public trust, the US firm must provide a more detailed and responsible explanation.

The US government has launched a global crackdown on Huawei, citing national security reasons and claiming that the Chinese company - the world's largest telecom equipment provider - is working for the Chinese government to spy on other nations.

FedEx said Sunday that it will fully cooperate with the investigation into its misrouting of Huawei parcels, saying it attached great importance to Chinese customers.

However, its short statement, without further explaining why misrouting parcels happened, failed to calm the widespread anger of Chinese netizens on the issue, particularly when many of them showed strong support for Huawei amid a US clampdown.

As a major delivery firm, FedEx has violated a core value of the industry - the mission has to be achieved - and it lacks a business ethos of customer supremacy, Zhao Xiaomin, an industry analyst, told the Global Times on Sunday. "For a public listed company with market cap over $40 billion, such behavior is extremely irresponsible," he said.

Although the company handles about 55 percent of international deliveries, it has a slightly small market share in China and faces fierce competition from homegrown delivery firms.

In the first half of 2018, Chinese private delivery firms accounted for about 90 percent of market share, leaving little room for foreign delivery firms to grow.

Some analysts suggested that FedEx is willing to sacrifice its reputation in the domestic market because its market share is so small that it could be just ignored. "It's highly likely that it took the risk of cooperating with (US) authorities for reasons we don't know," Shao Zhonglin, former assistant secretary-general of the China Express Association, told the Global Times on Sunday.

More importantly, the firm owes a detailed explanation to the Chinese public as to why and how it misrouted those parcels, he noted.

Called the "non-reliable entity list," the list will include foreign entities, individuals and companies that block and shut the supply chain, or take discriminatory measures for non-commercial reasons, and when their actions endanger the business of Chinese companies as well as global consumers and companies, according to MOFCOM.

If FedEx diverted Huawei's packages on purpose, which might have hurt the interests of the Chinese company, the US delivery firm will be probably the first one put on the new entity list, analysts warned.

"FedEx is facing a very critical moment now. It has to come up with a detailed explanation and ratification measures, and it has to take this matter seriously," Zhao said.