Feds probe 'quality' of repairs on plane in Hawaii crash

Federal investigators will review repair and inspection records on the skydiving plane that became inverted before crashing shortly after takeoff on Oahu's North Shore, killing all 11 people on board in the deadliest civil aviation accident since 2011. 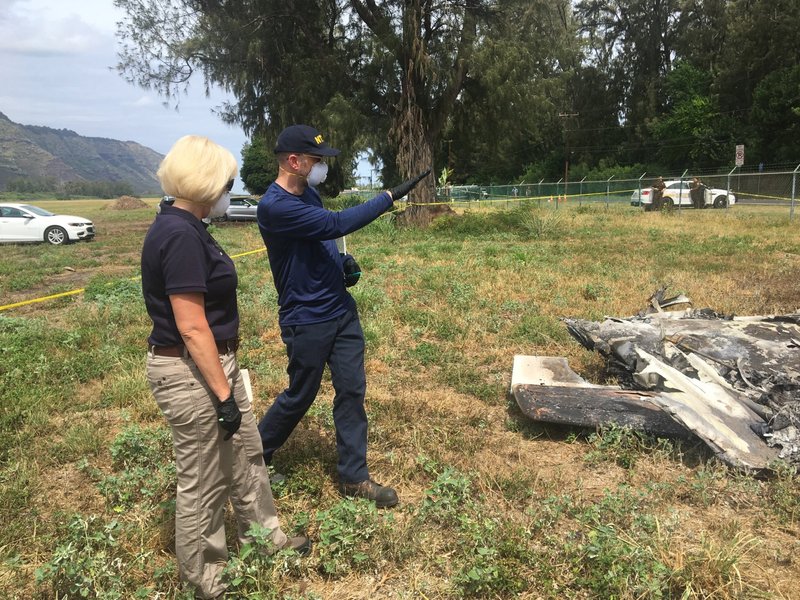 The same plane that crashed Friday sustained substantial damage to its tail section in a 2016 accident while carrying skydivers over Northern California.

Repairs were then made to get the plane back into service, National Transportation Safety Board officials said at a news conference Sunday.

The plane was equipped to carry 13 people, she said.

"Weight and balance has a factor in the safety of these operations and that's a calculation that needs to be made before a plane is operated," she said.

In the 2016 incident, the twin-engine plane stalled three times and spun repeatedly before the pilot managed to land it after the skydivers jumped out, the NTSB said in its investigative report. The 1967 twin turboprop plane was too heavily weighted toward the back, which was blamed on the pilot.

Charred debris from the plane remained on the field at Dillingham Airfield, and it could stay there for three or four days before being removed to a secure location. The airport remains closed.

The NSTB will issue a preliminary report in about two weeks. The final report, which will include the cause of the accident, could take up to two years, but Homendy said the NTSB has at times issued urgent safety recommendations before the final report, if warranted.

Friday's crash was the most deadly civil aviation accident in the United States since a 2011 Reno Air Show wreck killed a pilot and 10 spectators in Nevada.

Officials have not named the victims in Friday's North Shore crash. The mayor's office said victim identifications could be released on Monday.

The NTSB asked anyone with information about the accident, including if they have photos or video, to share that with the agency.