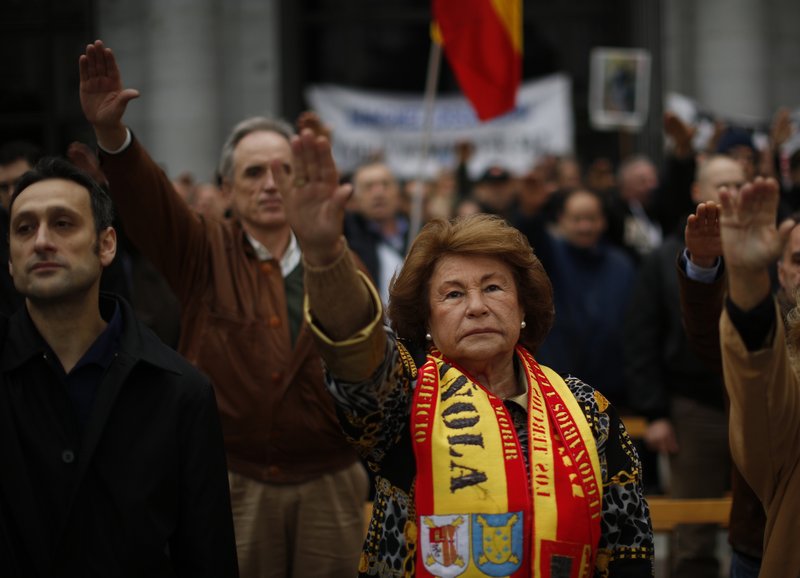 Spanish police intervened Sunday to keep trouble from erupting at a rally in Madrid marking the anniversary of military dictator Francisco Franco’s death after feminist protesters interrupted the event.

Officers on horseback and on foot quickly moved to keep an angry crowd of about 200 away from the three members of the Feminist group Femen who ran into the gathering. The women were topless and had the words “Legal fascism, national shame” painted on their torsos.

The rally is held annually on the Sunday falling closest to Nov. 20, the date Franco died in 1975. The general ruled Spain for 36 years after leading a military uprising that started the Spanish Civil War.

Spain’s Socialist-led government plans to exhume Franco’s remains from the Valley of the Fallen, a mausoleum northwest of Madrid he ordered built as a memorial to the 1936-39 war. Some 34,000 people from both sides of the fighting are buried at the site, most of them never identified.

Applauded by Spaniards on the left, the decision has infuriated others nostalgic for the dictatorship and drawn criticism from Spain’s center-right political parties, who consider it unnecessary.

Elsewhere on Sunday, supporters of the government’s plan to move Franco’s remains gathered at the Valley of the Fallen.

The anti-Franco protesters held a banner reading “Truth, justice and compensation for the victims of Franco” and chanted “We won’t forgive, we won’t forget!”