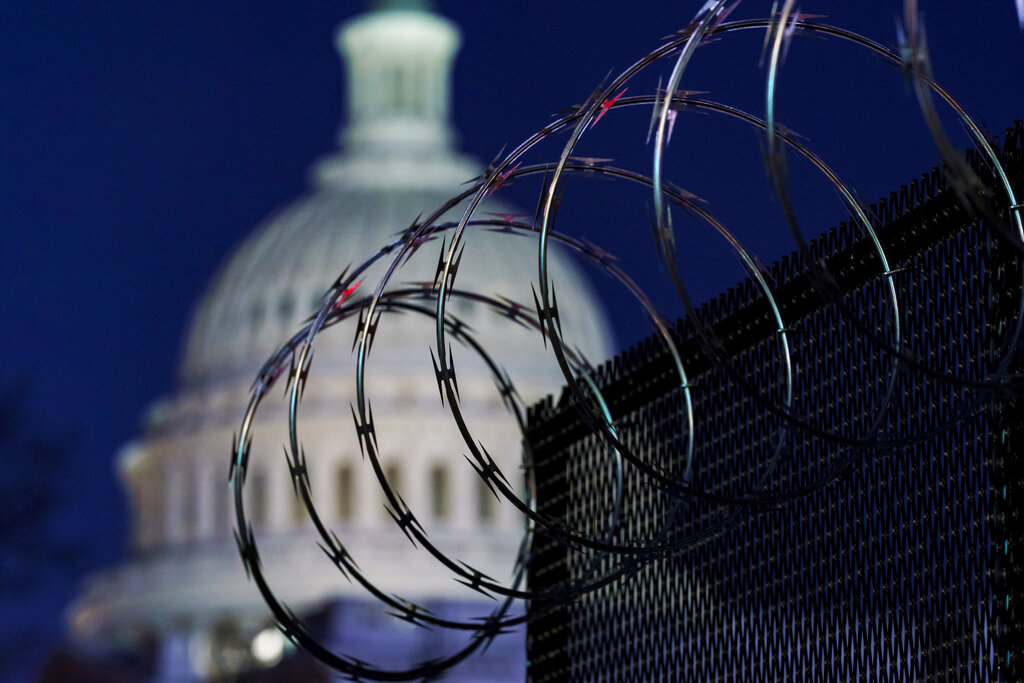 In this Jan. 19, 2021 photo, riot fencing and razor wire reinforce the security zone on Capitol Hill in Washington. (Photo: AP)

That foreboding black fence erected around the U.S. Capitol building has had an unintentional side effect: walling off the local government’s ability to enact new laws.

Washington, D.C., city officials say dozens of new local laws have been bottlenecked because of the lockdown of the Capitol building after the violent Jan. 6 attack by supporters of former US President Donald Trump. Under terms of the District's tortured relationship with the federal government, physical paper copies of all new laws must be hand-delivered separately to Senate and House leadership. They cannot be mailed or emailed.

“We are unable to get through the fences. We are trying to find a way to deliver the legislation,” D.C. Council Chair Phil Mendelson said Monday. “Sooner or later, there's going to be a gate that opens.”

The problem was resolved by Monday afternoon. Nyasha Smith, the secretary of the D.C. Council, told The Associated Press that her office met “off-campus” Monday with a House of Representatives staffer to deliver the documents for House leadership. Last Friday, they did the same with a member of Vice President Kamala Harris' staff; Harris, as vice president, presides over the Senate.

But D.C. officials say the episode shines a light on the larger issue: the fact that D.C. isn’t a state and needs to run its local laws past Congress in the first place.

Mendelson said “about 60” pieces of legislation had been held up so far. “It is an irrational and unsustainable situation that we cannot pass permanent legislation that can become permanent law,” he said. “It just shouldn’t be this way.”

Now that the bills have been submitted, they automatically become D.C. law if Congress takes no action within 30 days, or 60 days for bills that alter the city’s criminal code. Only three D.C. bills have been directly overturned since 1975, but members of Congress do sometimes seek to alter or influence D.C. laws by attaching budget riders to certain bills.

Smith has documented the difficulties getting the paperwork physically past the barrier on her office's official blog. She wrote that the fence is just the latest in a string of recent difficulties surrounding the obscure ritual known as “congressional transmittal.”

When the COVID-19 pandemic shut down the Capitol to outsiders, D.C. Council staffers were able to connect with a contact in the House and a contact in the office of former Vice President Mike Pence.

For much of 2020, Smith said that D.C. city staffers would meet these contacts “outside the Capitol on the grounds of the Congressional campus to deliver our legislation.”

That arrangement changed in November after Trump began disputing his election loss — charging, without proof, that the election had been tipped by widespread election fraud.

“Given the contentious and un-collaborative transition of power between the outgoing and incoming administrations, it was impossible to get a contact in the VP’s office toward the end of 2020,” Smith wrote last week. “Then January 6th unfolded. It has since been impossible to get any where near Congress.”