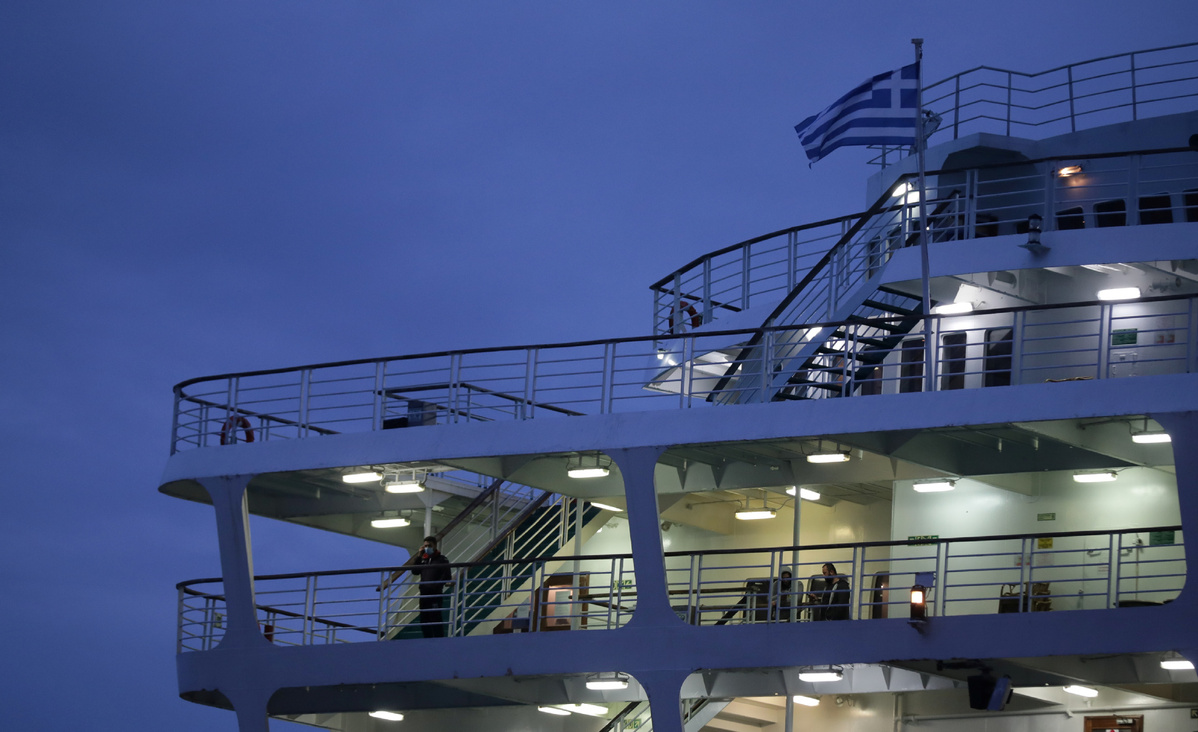 Passengers stand in the Eleftherios Venizelos passenger ship, moored at the dock of Piraeus after some of them tested positive for the novel coronavirus and authorities placed the ship under quarantine, following the outbreak of coronavirus disease (COVID-19), in Piraeus, Greece, April 3, 2020. (Photo: Agencies)

PIRAEUS -- The Greek ferry "Eleftherios Venizelos" with 119 confirmed cases on board has docked at Piraeus port, as the Greek government started on Friday the transfer to the shore of 261 passengers who tested negative for the novel coronavirus, Greek national news agency AMNA reported.

According to the report, the 119 infected will remain on board for a 14-day quarantine.

The ferry had anchored outside the harbor since March 22, barred from docking as part of measures to restrict the spread of the virus.

A few days ago, two people on board tested positive and were transferred to a nearby hospital.

Those tested negative were being taken to hotels for a precautionary quarantine, in accordance with the COVID-19 protocol, and will be repatriated afterward, local officials said.

"All those infected are in good condition. I want to make clear that there is no problem and that most of them have no symptoms," Nikos Hardalias, Deputy Minister for Civil Protection and Crises Management at the Ministry of Citizen Protection, told media in front of the ship after a meeting with other officials.

"We are all here so that each one on his part will contribute to addressing this indeed unprecedented and difficult situation, which I stress, is absolutely under control," Piraeus Mayor Yiannis Moralis said.

People who will remain on board will be provided full healthcare, it was stressed.

"EODY will also be operating a special helpline for their psychological support as long as they stay on board," Panagiotis Arkoumaneas, President of the National Public Health Organization (EODY), added.

Six fatalities registered in the past 24 hours pushed the total to 59, he told a press briefing broadcast live on national broadcaster ERT.

By Friday afternoon, Greece had confirmed 1,613 infection cases since the first infection in the country was diagnosed on Feb 26.

A total of 92 patients are being treated in intensive care units, while 11 patients have been discharged from ICUs, the expert noted.

Greek authorities have taken all necessary measures to assist 23 refugees who tested positive on Thursday inside a refugee camp, an hour's drive north of Athens, as well as the rest of the people hosted at Ritsona reception center, said Manos Logothetis, secretary at the Ministry of Migration and Asylum, at the same press briefing.

The first confirmed case concerning a refugee in Greece was announced earlier this week. A 22-year-old refugee, who resided at Ritsona camp, was diagnosed with the infection at an Athens hospital where she gave birth, officials said.

The camp was now in quarantine, while the entire country is in a 14-day lockdown since March 23.