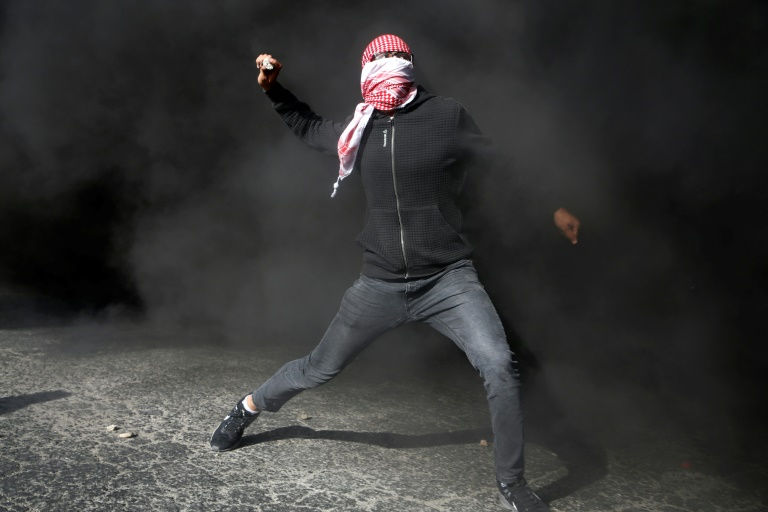 A Palestinian protestor throws stones towards Israeli forces in the West Bank city of Ramallah on December 11, 2017. Photo: Abbas Momani

The Middle East saw a fifth day of protests on Monday over US President Donald Trump's declaration of Jerusalem as Israel's capital, while further global condemnation followed the deeply controversial move.

While tens of thousands of protesters gathered in Lebanon, Israeli Prime Minister Benjamin Netanyahu met EU foreign ministers in Brussels, declaring that the move he has lauded as historic "makes peace possible".

He also said he expected "all or most" European countries would follow the United States -- but the 28-nation bloc's foreign policy head Federica Mogherini gave him a stern rebuff, telling him to "keep his expectations for others".

During a visit to Cairo, Russian President Vladimir Putin denounced Trump's decision as "destabilising" while calling for a resumption of long-stalled Israeli-Palestinian talks. 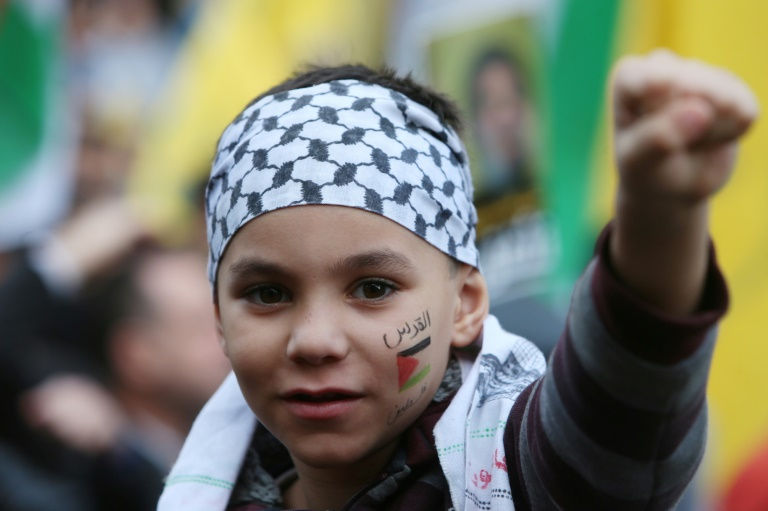 A boy with a Palestinian flag painted on his face during a rally organised by Lebanon's Hezbollah in Beirut on December 11, 2017. Photo: AFP

Hezbollah, which fought a war with Israel in 2006, organised a demonstration in Beirut that saw tens of thousands chanting "Death to America!" and "Death to Israel!"

Further protests were held in Iran and the Palestinian territories.

In Tehran, a few hundred diehard Iranian conservatives rallied against Israel and said Trump had hastened its demise with his decision.

In Ramallah in the occupied West Bank, dozens of Palestinians threw stones at Israeli soldiers, who responded with tear gas and rubber bullets.

"We came here against Trump's decision and we want to send a message that Jerusalem is and will stay our capital, and we will stay to defend it," one protester in a black ski mask told AFP.

There were also low-level clashes in Hebron and the Gaza Strip. 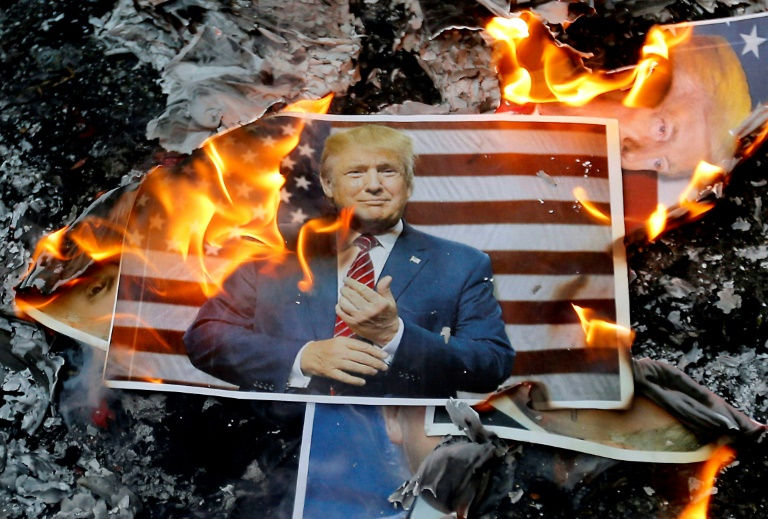 A burning portrait of US President Donald Trump on the ground during a demonstration in Tehran on December 11, 2017. Photo: AFP/Atta Kenare

Some 27 Palestinians were wounded by live fire or rubber bullets throughout the day, the Red Crescent said.

Palestinian demonstrations have declined in number and intensity since reaching a peak on Friday, but there are concerns they will again increase later this week.

Late Monday the Israeli army said it hit "military posts" of the Gaza Strip's Hamas rulers with tank and aircraft fire after Palestinians fired a rocket at southern Israel.

There were no reports of casulties on either side.

Four Palestinians have been killed so far in clashes or Israeli air strikes in response to rocket fire from Gaza, and hundreds have been wounded.

Tens of thousands have also demonstrated in Middle Eastern and Muslim nations.

Palestinian leaders have been outraged by Trump's move, but they also face difficult choices in how to respond since they rely on US aid and would like to salvage remaining hopes of a two-state solution to the conflict.

President Mahmud Abbas will refuse to meet US Vice President Mike Pence when he visits the region later this month, Palestinian officials say, a move that led Washington to accuse Abbas of "walking away" from a chance to discuss peace. 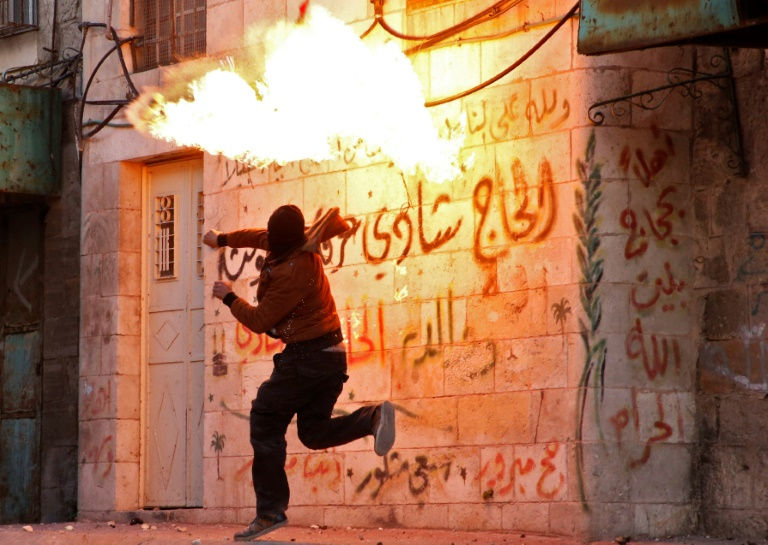 A masked Palestinian protester throws a petrol bomb at Israeli soldiers in the West Bank town of Hebron on December 11, 2017. Photo: AFP/Hazem Bader

Abbas on met President Abdel Fattah al-Sisi in Egypt -- a key US ally in the region -- ahead of a summit of the Organisation of Islamic Cooperation on Wednesday.

Egyptian presidential spokesman Bassam Radi said Sisi had reaffirmed Cairo's "firm" position on "the need to preserve the legal and historical status" of Jerusalem and support for an independent Palestinian state with east Jerusdalem as its capital.

Netanyahu, who has been dogged by corruption investigations against him at home, has lauded Trump's declaration.

On Monday, he was in Brussels as part of a two-day trip to Europe after having met French President Emmanuel Macron in Paris the previous day, on visits planned before Trump's move.

But Netanyahu, who heads what is seen as the most right-wing government in Israeli history, showed no sign of obliging, instead seeking to blame the Palestinians for stalled peace efforts.

Monday's talks with EU foreign ministers was the first such meeting with an Israeli premier in 22 years and came after the bloc's diplomatic chief Federica Mogherini warned Trump's move could take the situation "backwards to even darker times".

Netanyahu later said he told the EU inisters to "stop spoiling the Palestinians -- tell them clearly".

"I think that the Palestinians need to be brought back to earth, to reality," he said. 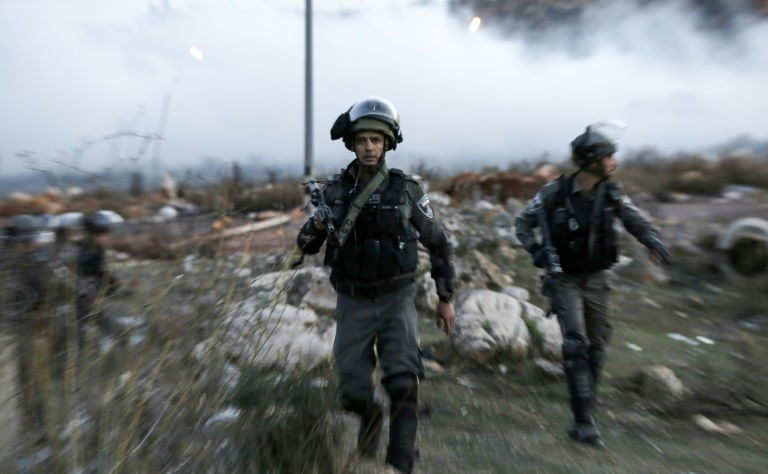 An Israeli border policeman walks through tear gas fumes during clashes with protesters near an Israeli checkpoint in the West Bank city of Ramallah on December 10, 2017. Photo: AFP/Abba Momani

Mogherini said the "worst thing that can happen now is an escalation of tensions, of violence", and restated the EU's position that a two-state solution with Jerusalem as capital for both Israelis and Palestinians was the only sustainable way to resolve the conflict.

Jerusalem's status is perhaps the most sensitive issue in the Israeli-Palestinian conflict.

Israel sees the entire city as its undivided capital, while the Palestinians want the eastern sector as the capital of their future state.

Trump noted in his decision that Jerusalem's final status would have to be decided in negotiations between the two sides, but the Palestinians have not been convinced.

Many analysts have questioned how a fair peace process could be possible after such a major concession was made without seeming to demand anything in return.

Jerusalem is home to sites sacred to Jews, Christians and Muslims, and the Arab and Muslim world has seen the US move as an affront.

Turkish President Recep Tayyip Erdogan has been perhaps the most outspoken in warning about the consequences.

On Monday, he lashed out further, saying Washington was a "partner to bloodshed" after Donald Trump's recognition.