WORLD Fight between colleges and govt drags US into deeper quagmire

Fight between colleges and govt drags US into deeper quagmire

The fight between US universities and the US government over its "reckless, cruel" visa rules for foreign students is victimizing Chinese students, a major source of revenue for the US education market, and seemingly dragging the country, which just saw confirmed COVID-19 cases surpass 3 million into a deeper quagmire. 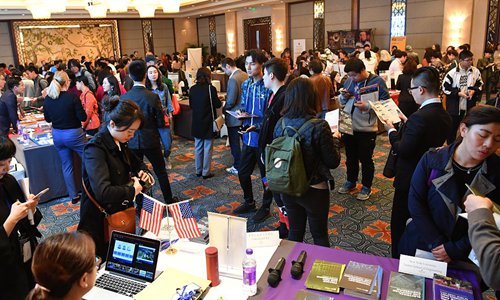 Over 60 US universities attend the forum to attract Chinese students in Chengdu, Sichuan Province on March 23, 2018. (Photo: VCG)

The policy, coming at a time when the US has thrown down the gauntlet to China by sending military aircraft frequently near China's coastal regions and continuing to stick its nose into China's internal affairs, caused great uncertainty to roughly 370,000 Chinese students who study in the country.

Some Chinese students reached by the Global Times on Thursday said that they appreciated their schools standing together with them, but such policies, along with the messed-up battle against the pandemic in the US, has disappointed them and reinforced their decision to return to China after graduation.

With the hashtag "Student Ban" trending on social media platforms, the Trump administration's visa regulations also appear to be affecting students who are planning to apply for US schools as several parents claimed that it would be probably better to send their children to other countries like Japan or Singapore.

When the two giants clash, small companies are getting caught in the crossfire, in a bitter joke, Chinese students described themselves as victims of a "clash of two titans." Insiders in the overseas study industry and experts slammed the Trump administration for using students as leverage to create a favorable atmosphere for his election in fall and suggested the students, when the new rules begin to take effect, sue the US colleges and government. 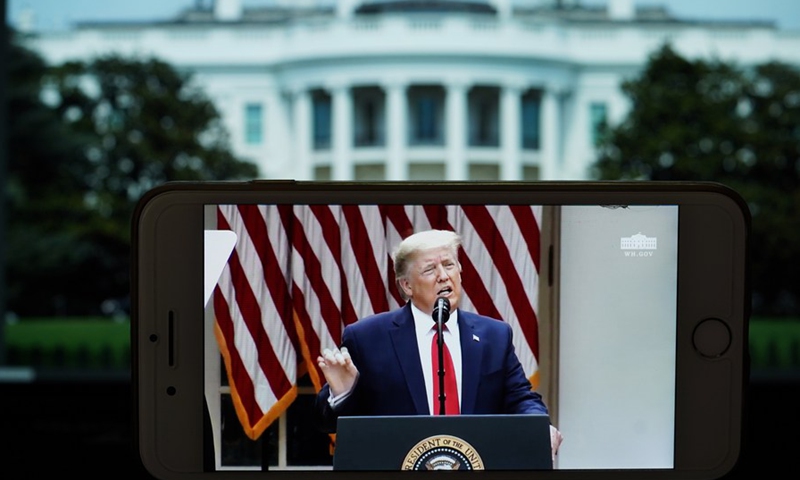 Photo taken on May 29, 2020 shows the live broadcast of U.S. President Donald Trump speaking at a press conference at the White House in Washington D.C., the United States. (Xinhua/Liu Jie)

Harvard University and the Massachusetts Institute of Technology sued the Trump administration in federal court on Wednesday, seeking to stop the order that bars international students from staying in the country if they attend US universities that offer online courses only during the pandemic.

University leaders called the policy cruel and reckless, which disrupts students' academic progress and undermines the schools' commitments and sacrifices that they have made to continue academic programs while balancing health and safety challenges stemming from the global pandemic.

The University of California and Northeastern University also followed in their footsteps on Wednesday with UC President Janet Napolitano calling the order "mean-spirited, arbitrary and damaging to America" and Northeastern President Joseph E. Aoun calling it a divisive approach that creates chaos for international students and has the effect of weakening American higher education.

Initiated on Monday, a petition to the White House requesting permission for students who hold F-1 visas to stay in the US through the fall semester has garnered over 240,000 signatures as of press time.

With the number of Chinese students falling further due to restrictive student visa policies in the US and the coronavirus crisis that adds fuel to the fire, Esther Brimmer, the executive director and CEO of the Association of International Educators in the US, warned that the US risks losing global talent with new policies that hurt the country academically and economically.

"That could mean a significant hit to school budgets," Bai Limin, an expert in charge of undergraduate program applications with ZMN International Education, a Beijing-based educational consulting agency, told the Global Times.

"As the Trump administration controls immigration and customs, even if students receive offers from US colleges, they still cannot get to campus. One in three of my 500 students who are applying for US colleges this year have expressed their willingness to give up their offers and turn to other schools, or apply for a gap year," Bai said.

Nancy, a Chinese student who got an offer from the University of Pennsylvania this year is one of them.

"My joy of being admitted by my dream school was soon diluted by a slew of visa policies issued by the US government," she said.

Nancy has devoted two years to her application to US universities meanwhile working as a full-time financial analyst.

"I went through rage and grief. I put so much effort in for so long, but ended up being a victim of the government's ineptitude in curbing the viral spread; falling hostage to Washington's crackdown towards my country," said Nancy, who applied for a deferral of her offer and quit her job in Beijing.

"This is a special year for me, I used to think the power struggle between the two superpowers is far from me, but now I realize no one is immune to the ever-changing global landscape."

Nancy whisked off the option of attending online classes. "Students who apply to study in the US don't just want to attend classes, but to have a taste of its culture and society. Online classes for us is just like serving the cake but scrubbing the cream away." "But after thinking about the Trump administration's recent remarks and decisions, maybe the US is not that attractive after all."

Bai pointed out that as much as the US government, colleges both want to draw students back to campuses, in this case, they should have a consensus. The difference is that the government chose to put politics first while the academies struggle to strike a balance.

Li Gen, a student majoring in chemistry from a university in the central part of the US, said his school rejected the order the second day after it was announced and he was very touched to see colleges willing to sue the government for the sake of vulnerable groups.

"For the year after I came to the US, I had a dream to genuinely stay and make a difference. Having personally witnessed the chaos that the government has stirred up in dealing with the pandemic and the ugly faces that some politicians show in dodging responsibilities, what I want right now is to go back to my home country as soon as possible," Li said. But the expensive air ticket made him flinch.

Over the past few years, Trump has been introducing several policies to decouple from China by pushing US companies to leave China, setting barriers for students and restricting academic exchanges between the two sides. In recent years, the US has charged several Chinese students and scholars for spying or stealing scientific research.

Some students in the US shared with the Global Times that the longer they stay in the US, the more they feel what "fallen leaves return to their roots" means. The environment affected by these policies made them feel dreariness and marginalization. They were unfairly scrutinized, stigmatized due to their Chinese ethnicity making them feel more patriotic than before they left. Parents consult with admission officers from US universities at the China International Education Exhibition in Beijing in October. (Photo: VCG)

A PhD student surnamed Huang majoring in law at a US university told the Global Times that Harvard and MIT may have a 50/50 chance of winning the lawsuit. The lawsuit is aimed at applying for a temporary restraining order. If successful, the new regulations will be halted for 14 days. After that, the lawsuit could turn into a preliminary injunction, which means the new rules will not take effect before the formal ruling is issued.

However, because some schools will open next month, the time for the lawsuit is relatively tight, Huang said.

"The Trump administration is anxious to resume work and production in a bid to create a favorable atmosphere for the upcoming election," said Shen Yi, director at the Research Center for Cyberspace Governance at Fudan University. "International students are just purely political pawns."

If the order takes effect, he suggested Chinese students should unite together to entrust a US lawyer and sue the schools and the government.