President Donald Trump is being forced to play Electoral College defense with a trip to Iowa, a state he won handily in 2016 but where Democrat Joe Biden is making a late push. 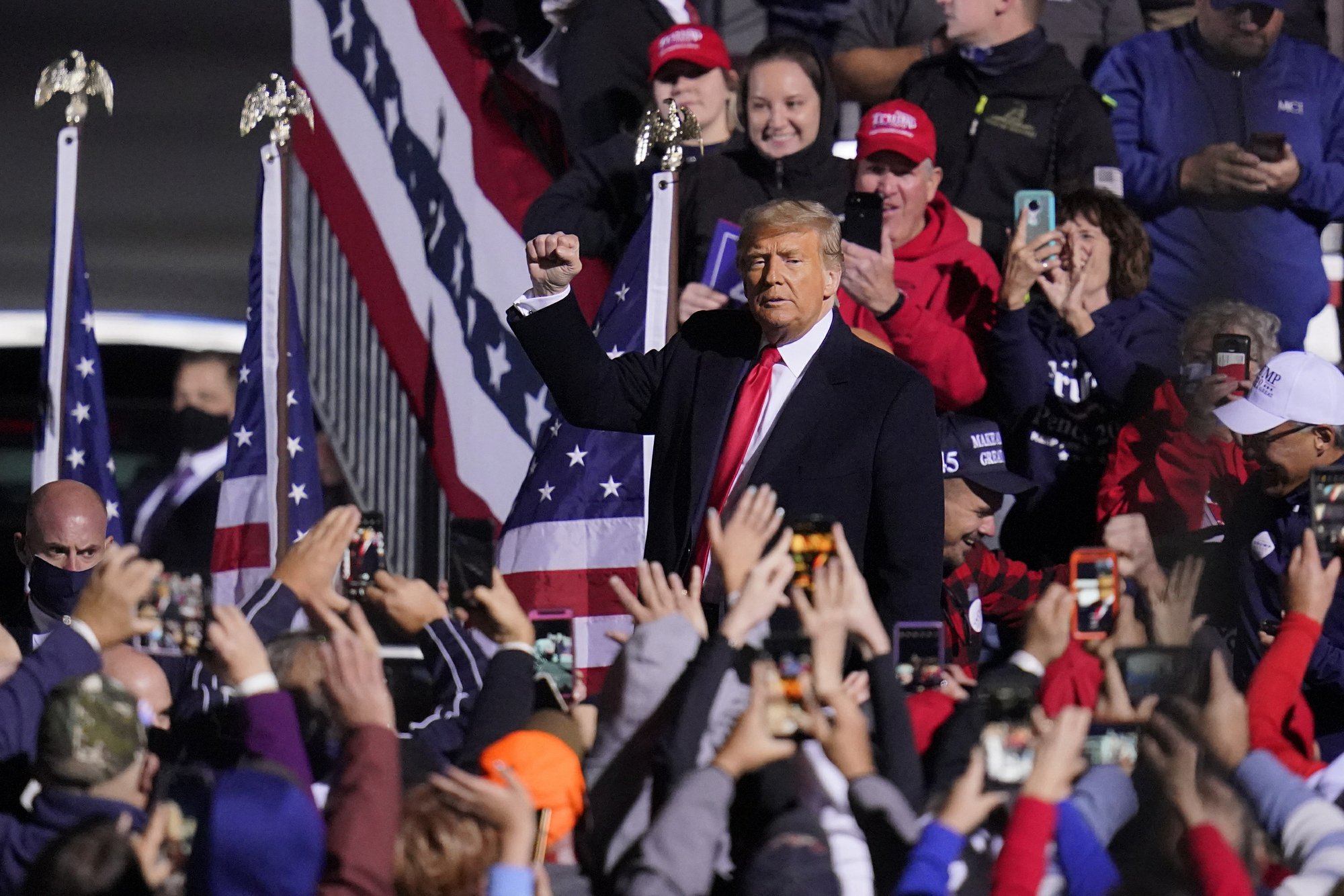 Trump's heavy travel this week, including his rally Wednesday in Des Moines, reflects his uphill climb three weeks before the election. He has already visited Pennsylvania and Florida and will head to another battleground state he likely can't win without — North Carolina — as well as those he once thought were in his grasp but where recent polling shows Biden improving — Iowa and Georgia.

Both candidates tailored their campaigning Tuesday to best motivate voters who could cast potentially decisive ballots.

Biden went to Florida to court older voters, looking to deliver a knockout blow in a state Trump needs to win while trying to woo a group whose support for the president has slipped. And Trump visited Pennsylvania, arguably the most important state on the electoral map, unleashing fierce attacks on Biden's fitness for office in his opponent's backyard.

"He's shot, folks. I hate to tell you, he's shot," Trump told a big rally crowd in Johnstown, saying there was extra pressure on him to win because Biden was the worst presidential candidate of all time. "Can you imagine if you lose to a guy like this? It's unbelievable."

In his second rally since contracting the novel coronavirus, Trump spoke for more than an hour to thousands packed in tightly and mostly maskless. Like the night before in Florida, Trump seemed healthy, and his rhetoric on the pandemic — including the dubious claim that it was mostly a thing of the past — changed little despite his own illness, except for his threat to kiss audience members to prove his immunity.

Trump made a local pitch, hammering home the false claim that a Biden administration would limit fracking in areas where the economy is heavily dependent on energy. Biden's proposal would only bar new leases on federal land, a fraction of U.S. fracking operations. Touting his elimination of a federal rule that would have brought more low-income housing to the suburbs, Trump zeroed in on groups whose support he has struggled to retain, including female voters turned off by his rhetoric.

"So I ask you to do me a favor. Suburban women: Will you please like me? Please. Please. I saved your damn neighborhood, OK?" Trump said. "The other thing: I don't have that much time to be that nice. You know, I can do it, but I gotta go quickly."

Biden spent the day in Florida, his third visit to the state in a month, looking to expand his inroads with older voters. To Trump, "you're expendable, you're forgettable, you're virtually nobody," Biden said at a senior center in Pembroke Pines, about 20 miles (32 kilometers) from Fort Lauderdale.

The "only senior Donald Trump seems to care about" is himself, Biden added.

After frequently criticizing Trump for not doing enough to promote mask wearing to prevent the spread of the virus, Biden was wearing two masks, an N95 underneath a blue surgical mask, as he deplaned in Florida. Later in the day, he switched to his normal mode of donning just one.

Introducing Biden in Pembroke Pines, Democratic Rep. Debbie Wasserman Schultz noted that "neither of these men will walk into the White House without the blessing of Florida seniors."

"Much is made of the rise of the youth vote, and thank God for it," the Florida congresswoman said. "But it's residents 65 or older who still swing elections in the Sunshine State."

"I'm running as a proud Democrat, but I will govern as an American president," Biden said to supporters blaring their horns as they listened from cars. "I'll work as hard for those who vote against me as those who vote for me."

Back in Washington, Tuesday marked a second day of Senate hearings to confirm Judge Amy Coney Barrett to the Supreme Court. Trump and top Republicans see a swift confirmation as a chance to energize conservatives. Trump mentioned those proceedings as he left the White House, saying, "Amy was doing incredibly well."

Biden's campaign believes it can win the White House without Florida's 29 electoral votes, but it wants to lock up the state to pad a margin of victory over Trump, who has questioned the legitimacy of an election where many people will cast mail-in ballots during the pandemic. Biden has vowed to win Pennsylvania, but if he falls short, his path to victory narrows substantially.

The Trump campaign, meanwhile, has grown increasingly worried about states he won handily four years ago, including Ohio and, to a lesser extent, Texas. He all but must win at least one of the three Great Lakes states he flipped red in 2016.

But facing stubborn deficits in Wisconsin and Michigan, the president has placed renewed focus on Pennsylvania.

With 20 electoral votes, Pennsylvania is anchored by Philadelphia to the east, Pittsburgh to the west. But the rest of the state is largely rural, comprised of small cities and towns where Trump ran up the score four years ago. He will need to again, in even greater numbers, as his prospects have slipped since 2016 in places like vote-rich suburban Philadelphia, where he underperformed by past Republican measures.

Trump's rally was at the airport in Johnstown in Cambria County, a historically coal and steel area that narrowly backed Democrat Barack Obama in 2008. But it has trended Republican for the past three decades and, in the 2016 election, Trump scored a 37 percentage-point victory. The area is also substantially whiter and has lower median incomes and lower rates of college-degree attainment than the rest of Pennsylvania.

Biden, who was born 220 miles (350 kilometers) away in Scranton, visited Johnstown late last month. The former vice president has tried to cast himself as a champion of working-class voters while accusing Trump of focusing instead on stock market returns and Park Avenue values.

Despite the pandemic, Trump's campaign has prioritized in-person events and aggressive door-knocking as it tries to turn out new and low-propensity voters, including more members of the white working class who may have backed Democrats in the past.