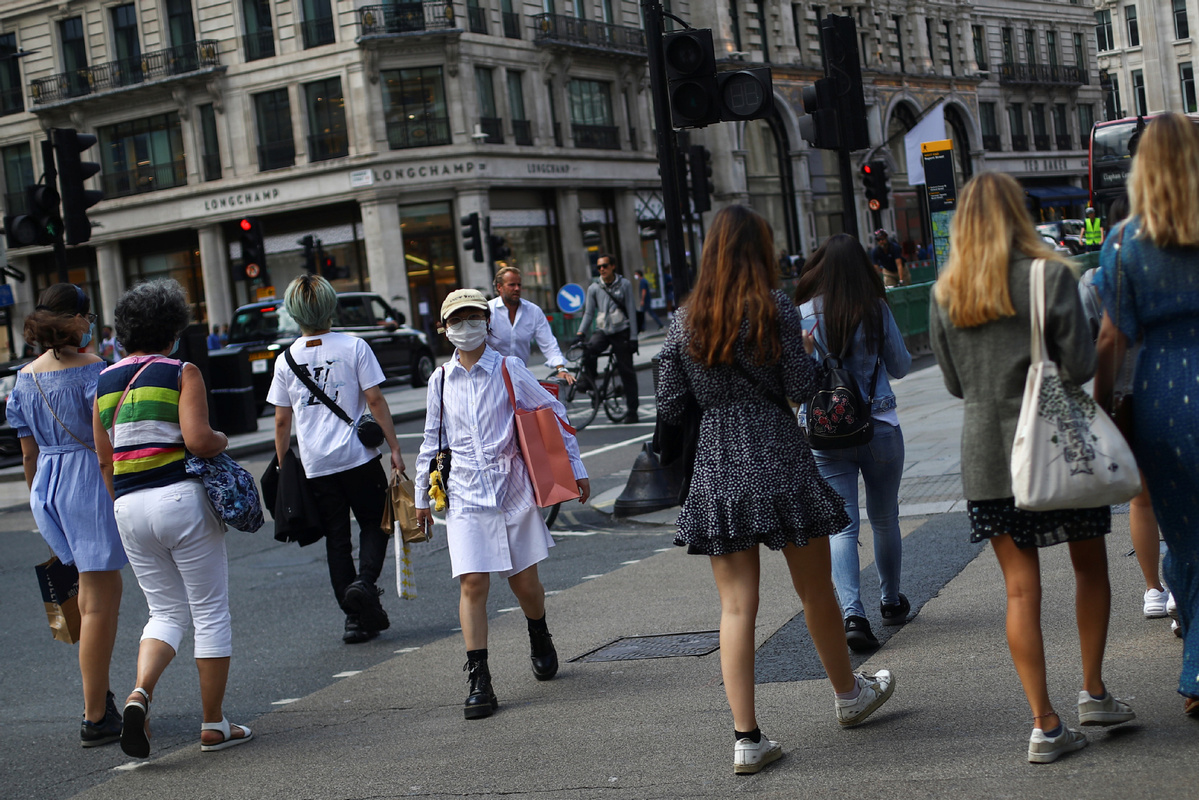 People walk by Regent street after the reopening of retail stores, amid the spread of the coronavirus disease (COVID-19), in London, Britain on June 16, 2020. [Photo/Agencies]

The impact of the novel coronavirus on the United Kingdom's economy has been revealed after figures from the Office for National Statistics showed that in May, for the first time in more than 50 years, the UK government's debt exceeded the size of the economy.

The British government has paid out large amounts through the furlough scheme, subsidizing the wages of employees who are temporarily not working, and exiting this could prove challenging.

"What will keep both the chancellor and investors awake at night is figuring out exactly how authorities intend to withdraw the life-support machine and exit the fiscal and monetary expansion while preserving demand and stabilizing the job market," Paul Craig of Quilter Investors told the Financial Times.

The UK is not the only major economy suffering, however. Among G7 members, France, Italy, the United States and Japan have also exceeded 100 percent debt, or are on course to do so. Only Germany and Canada are expected to avoid crossing that threshold.

Meanwhile, Health Secretary Matt Hancock has told the BBC lockdown will soon be eased further, amid speculation the two-meter social distancing regulation may be lessened to throw venues such as pubs and restaurants an economic lifeline when they reopen.

"This week we will announce further details of the measures we can take to relieve some of the national lockdown measures at the start of July, including on July 4," he told the Andrew Marr Show.

But the UK's National Statistician Ian Diamond has warned that although there has been a "steady decline" in cases, vigilance remains vital. "My own belief is that this virus is going to be with us for a long time," he said. "We need to be quick in acting to ensure we don't get a large second wave."

His comments came after the confirmation of an outbreak of 58 cases at the 2 Sisters Food Group chicken processing plant in North Wales.

2 Sisters is one of the UK's largest food producers, producing food for high street shops such as Marks and Spencer, and also takeaway food outlets including KFC, although the company said the site affected does not supply branded or retail food customers.

"The health, safety and wellbeing of our colleagues is ultimately the thing that matters most at our business," said a company statement.

"We are a responsible company with people at its core. Without our people we are nothing ... we will not tolerate any unnecessary risks, however small, for our existing loyal workforce at the facility."

Better news comes from the fact that UK visitors will be allowed into Spain without the need for quarantine.

Tourism accounts for more than 12 percent of Spain's GDP, and it is enormously popular with British visitors. After an extremely tight lockdown, when Spain announced it was re-admitting visitors, it seemed Britons may be required to isolate on arrival, in response to a similar scheme being used in the UK, and Spain's Foreign Minister Arancha Gonzalez made a point of highlighting this.

"We will allow British visitors just like the rest of the European Union to come to Spain freely and without the need for quarantine. There will be a triple-check for their origin, temperature and we'll ask everyone to register so we can trace them," she said.

"We're discussing with the UK authorities to see if they would do the same on their side, we nevertheless are doing this out of respect for the 400,000 British citizens that have a second residence in Spain and are dying to benefit from their homes in our country.

"We do hope they (the UK government) will be sensitive to the 250,000 Spaniards that are also living in the UK and would like to enter the UK without a quarantine."