MANILA, May 22 (Xinhua) -- Filipinos elected the political allies of President Rodrigo Duterte in the Philippine Senate, shutting out opposition candidates critical of the Duterte administration. 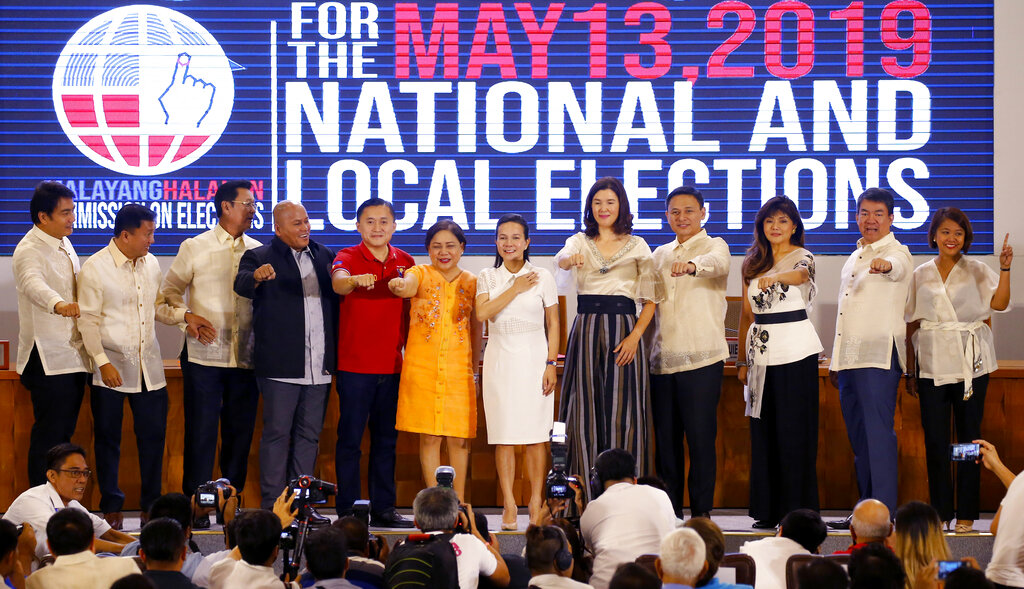 Twelve newly-proclaimed senators gesture their own political party symbols during a ceremony at the Commission on Elections in suburban Pasay city, south of Manila, Philippines Wednesday, May 22, 2019. (Photo: AP)

According to official results released on Wednesday by the Commission on Elections (Comelec), nine of the 12 winning senatorial candidates were Duterte's staunch supporters.

The 12 newly-elected senators who will serve until 2025. They will complete the 24-member Senate, according to the Comelec.

Bong Go, Duterte's loyal long-time aide with no political experience, won over 20 million votes landing in NO.3. NO.4 is Duterte's former national police chief, Ronald Dela Rosa, who garnered more than 19 million votes. It was their first time to seek an electoral post.

The nine candidates endorsed by Duterte and his daughter, Sara, who was re-elected again as Davao City mayor, won by a landslide in Mindanao where Duterte hails.

Many of Duterte's allies also won in the House of Representatives, including his eldest son Paolo, giving the 74-year-old leader control of Congress.

"The overwhelming majority of the electorate has responded to the call of the president to support those whom he said would help pass laws supportive of his goal to uplift the masses of our people and give them comfortable lives," presidential spokesman Salvador Panelo said in a news conference.

Indeed, the results of the May 13 mid-term elections augur well for the Duterte administration, especially in pushing for the key policy reforms needed to sustain the economic growth and attract foreign investments.

"It will give a big boost to all the necessary reforms that we will have yet to implement," Philippine Trade and Industry Secretary Ramon Lopez said in a recent news conference.

For example, he said the Philippines has yet to liberalize further certain sectors of the economy to attract more foreign investments. "And this would involve shortening the foreign investment negative list that we have," he added.

"So, a lot of reforms that the president would like to continue, and hopefully we'll get the support of the Congress," Lopez said.

The Philippines has managed to implement bold reforms over the past three years under Duterte who continues to enjoy broad and deep popular support. In the first half of the Duterte presidency, the administration has proven its steadfast resolve and ability to implement tough reforms.

Philippine Finance Secretary Carlos Dominguez also pointed to the fact that the government carried out such reforms absent of a crisis and without any external influence compelling it to implement them.

"We have a very tough President, and one popular enough to face down entrenched interests. That's NO. 1," Dominguez said.

The Duterte administration's efforts to accelerate poverty reduction and achieve a more inclusive economic growth are accompanied by rising investments in the country's education and health.