The final 15 passengers who had been aboard a coronavirus-hit cruise ship that spent two weeks stranded off the coast of Uruguay flew to the United States on Wednesday, the country's foreign minister said. 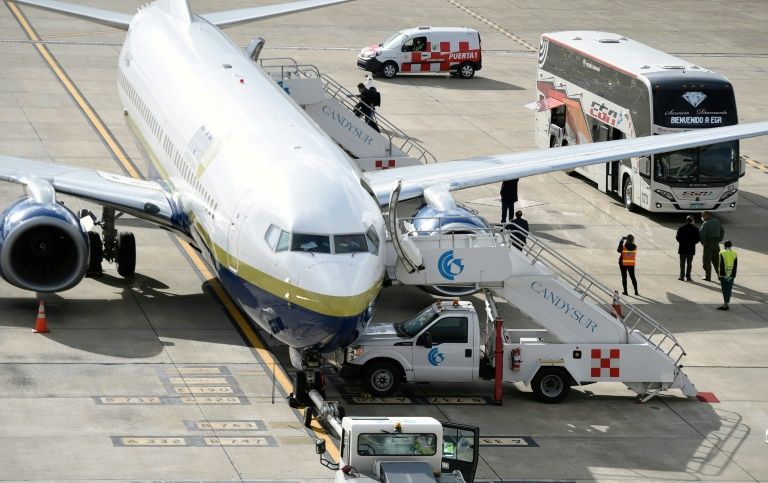 The final 15 passengers from the Greg Mortimer cruise ship, most of whom checked positive for the novel coronavirus, boarded a medical evacuation flight from Montevideo, Uruguay to Miami, Florida (Photo: AFP)

"The humanitarian corridor ends with this evacuation of the last passengers, said Ernesto Talvi, Uruguay's top diplomat, speaking as they departed from the Montevideo airport.

The passengers, most of whom checked positive for the novel coronavirus, boarded a medical evacuation flight to Miami, Florida.

The Greg Mortimer had spent more than two weeks off the port of Montevideo with more than 200 people aboard, among whom more than 100 cases of coronavirus infection were detected.

A first flight with 110 Australians and New Zealanders from the cruise ship left Uruguay on Saturday aboard a chartered flight destination Melbourne.

France's ambassador in Uruguay, Hugues Moret, told AFP that the majority of the passengers aboard the Wednesday flight "had tested positive for the coronavirus."

Of those departing, six were US citizens, three were from Britain, two were from Sweden, and the remainder were citizens of Canada, France, Germany and Switzerland.

Montevideo residents confined to their homes due to the COVID-19 pandemic took to the balconies to cheer and wave flags, bidding the passengers farewell as the bus drove by.

The nearly 80 crew members of the Greg Mortimer will remain quarantined aboard the ship.

The cruise ship had been on an expedition to Antarctica, South Georgia and Elephant Island when the adventure was called off on March 20 due to the nearest South American countries -- Argentina and Chile -- closing their borders and imposing lockdowns.

The ship headed to Montevideo as it was the nearest port still open.

It had been anchored in the Rio de la Plata, 20 kilometers from the coast since March 27, and was not allowed to dock in Montevideo until April 10.