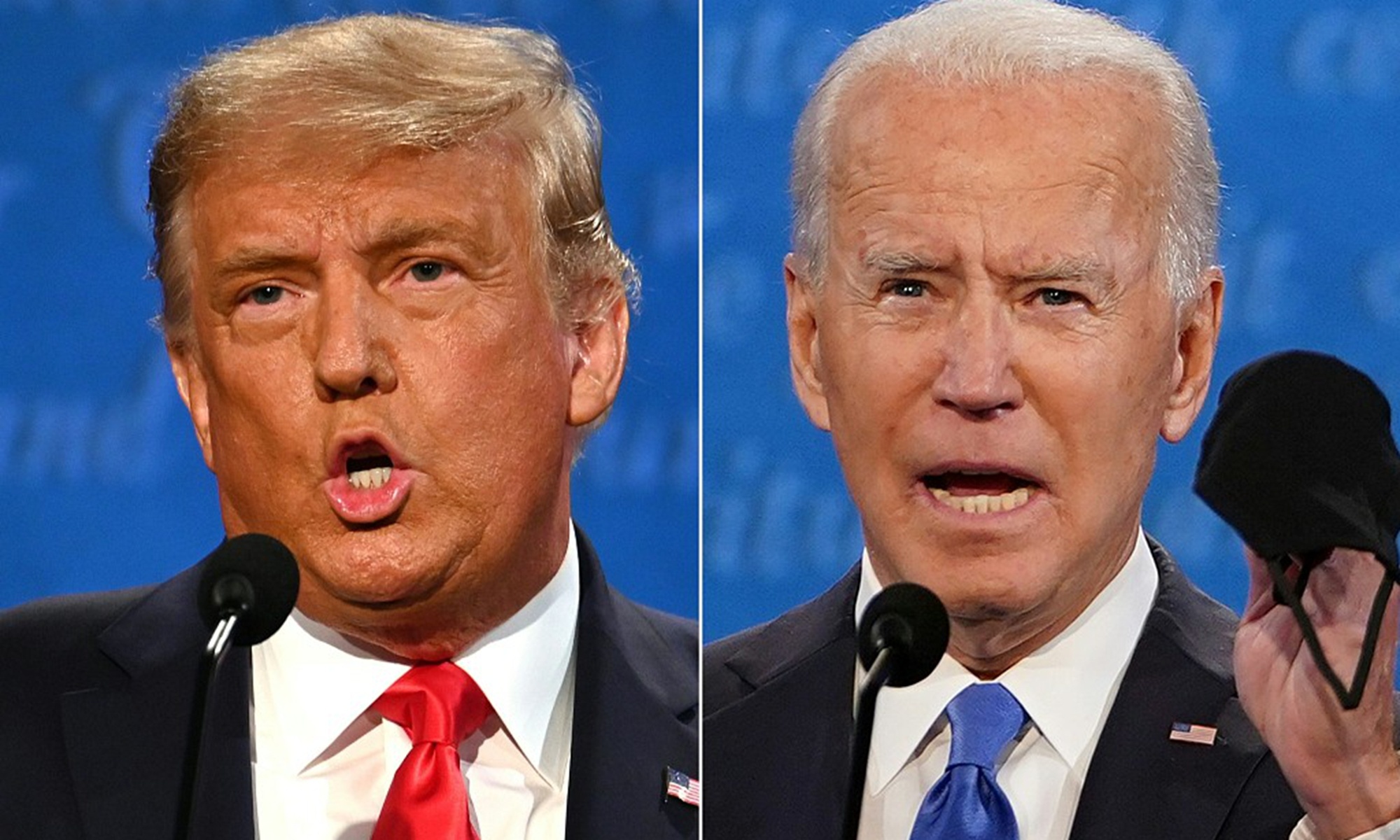 The  "less-furious" final presidential debate before the US election played out on Thursday night, in which US President Donald Trump and Democratic opponent Joe Biden faced off in a contest over COVID-19, national security and diplomacy among many other topics, during which China was still the most-mentioned country in their constant whining and blaming.

While both sides seemed to have learnt lessons from the last messy debate, behaving in a much more restrained way under a new policy that required the candidates to be muted while the other was answering, the debate still failed to deliver on any substantial plans to address the country's important problems, with both sides offering greatly different perspectives on foreign policy, the environment, racial injustice and COVID-19 topics.

Experts told the Global Times on Friday that the two presidential debates — and the way in which they were carried out — reveal the deteriorating political environment in the US, where bipartisan views are deeply divided, adding to the country's failed system exposed when having to deal with multiple crises this election year.

"Compared with the presidential debates before 2016 with a focus on how to lead the US into a better future, these debates [between Trump and Biden] were full of accusations about the other contestant without any good proposals. This is also a blow to the US public's psychology as they see no hope in the future," Sun Chenghao, an assistant research professor at the Institute of American Studies, China Institutes of Contemporary International Relations, told the Global Times on Friday.

Presidential debates are supposed to serve as a window of opportunity for the public to really learn about how each of their candidates will lead the country if elected. However, after the first debate, many people felt the "true loser" was the American public. Indeed, when the final debate finished, many Western media outlets used words like "disingenuous" and "staid" to describe it.

In terms of bringing China into their blame games over coronavirus response, and other issues like national security and US economy, their rhetoric was nothing new. With the country's election day less than two weeks away, experts pointed out that both sides will continue to play the "China card," and Trump may even try to adopt a more aggressive tone against China and its political system, while Biden's tactic is to accuse Trump and his family of having personal connections with China.

Despite their generally improved performances, experts said that the final debate would not make much of a difference to the overall election result.

"Debates rarely make a significant difference to the election race unless one side stumbles heavily. When we look back at past debates, there have only been a few surprises, and candidates' promises are often hard to remember. In the first debate at the end of September, the most memorable moments were Trump interrupting a grand total of 128 times," said Diao Daming, an associate professor at the Renmin University of China, on Friday.

"Many voters already know who they are voting for," Liu Weidong, a research fellow at the Chinese Academy of Social Sciences' Institute of American Studies, told the Global Times on Friday.

Over 45 million people had already voted in early ballots before the debate, according to the United States Elections Project tracker, meaning nearly one third of all 120 million votes cast in 2016 have already been registered.

Currently, Trump is still trailing behind Biden in the polls, but it's still uncertain how Biden's poll advantages will turn into a voting advantage, analysts said.

Liu told the Global Times that as Trump starts to feel like he is being left behind, his "final days of insanity" before the election may play out in a dangerous way in the next 12 days.

Diao believes that Trump is likely to take a more aggressive and extreme approach in terms of foreign policy, especially with China, who, however, is well aware of Trump's irrationality and therefore fully prepared for any possibilities.

According to experts, the high frequency of "China" appearing in the US election is unusual as US voters actually care more about domestic matters, rather than foreign diplomacy. But this year, US politicians on both parties have made it a game in which the candidates compete to pass blame on China with coronavirus and domestic economy-related topics.

What should be worrying is although the "China card" is not necessarily effective, "playing it" will still brainwash the public into have an unfavorable impression of China, no matter the actual facts, experts warned.

Sun said Biden's attacks on Trump over China may incite the current administration to take more aggressive actions against China. What's more, Trump, if he loses the election and needs to step down in January, may decide to take more tangible — but dangerous — measures in Taiwan and the South China Sea before January, he said.

Analysts also noted that people may also take some clues from their different tactics toward China at the debate, when Trump explicitly attacked China and Biden talked about using the forces of allies to let China "play by the international rules."

"Trump will adopt an anti-China strategy regardless of the cost, with a strong Cold War mentality, or even accept a lose-lose situation… while Biden is a continuation of the traditional US strategy of maintaining the advantage over China through collusion with allies," said Diao.