WORLD Final round of voting underway in India's marathon elections

Final round of voting underway in India's marathon elections

The voting also covers Modi's constituency of Varanasi, a holy Hindu city where he was elected in 2014 with an impressive margin of over 200,000 votes.

He spent Saturday night at Kedarnath, a temple of Hindu god Shiva nestled in the Himalayas in northern India.

The last round of election includes 59 constituencies in eight states. Up for grabs are 13 seats in Punjab and an equal number in Uttar Pradesh, eight each in Bihar and Madhya Pradesh, nine in West Bengal, four in Himachal Pradesh and three in Jharkhand and Chandigarh.

Counting of votes is scheduled for May 23. 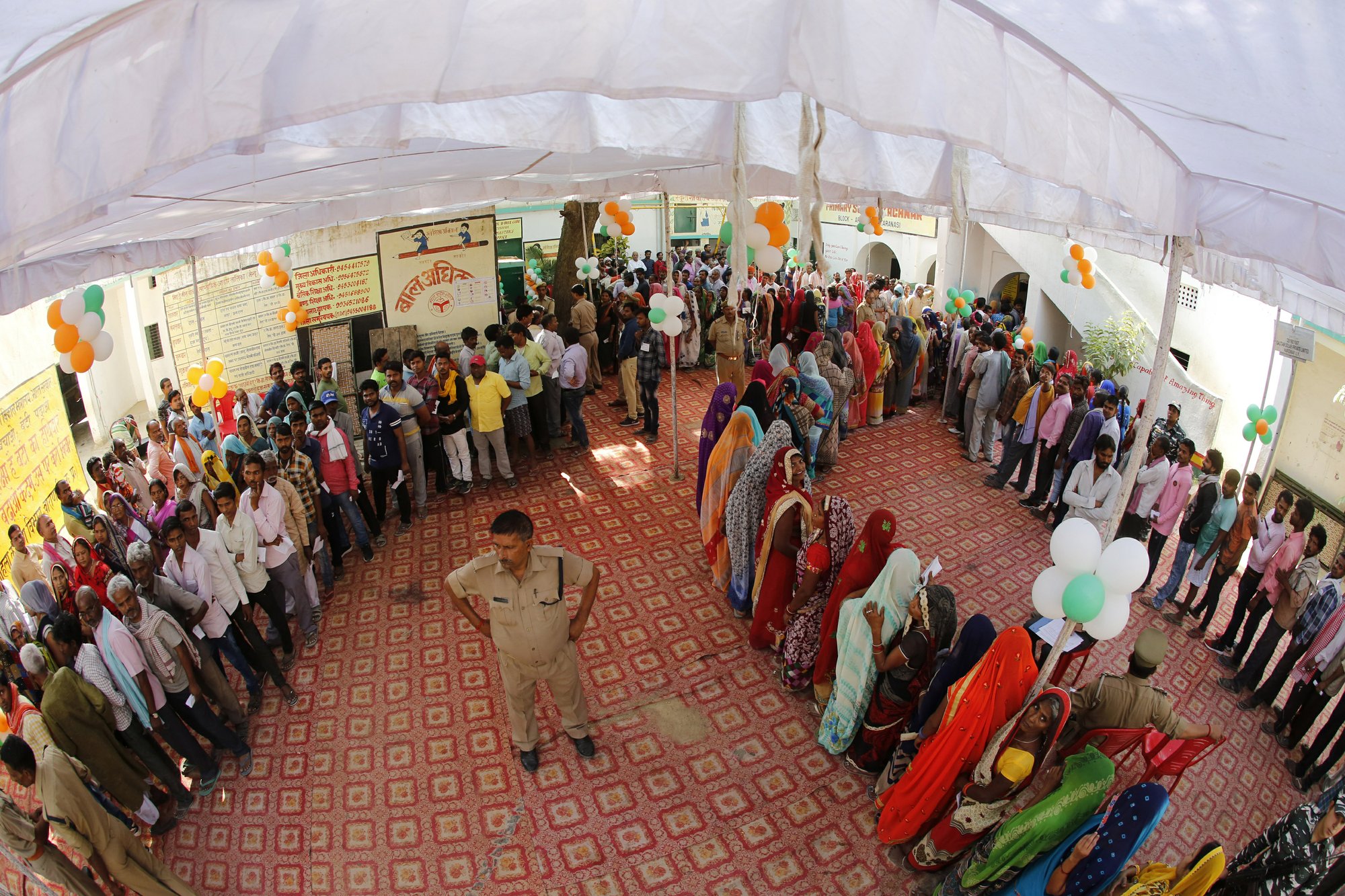 Indians wait in a queue to cast their votes at a polling station in Kachanar on the outskirts of in Varanasi, India Sunday, May 19, 2019. Indians voted in the seventh and final phase of national elections Sunday, wrapping up a 6-week-long long, grueling campaign season with Prime Minister Narendra Modi's Hindu nationalist party seeking reelection for another five years. (AP Photo/Rajesh Kumar Singh)

In Kolkata, the capital of West Bengal, voters lined up outside polling stations since early morning to avoid scorching heat with temperatures reaching up to 38 degree Celsius (100.4 Fahrenheit). Armed security officials stood guard in and outside the centers amid fear of violence.

While the election since April 11 has been largely peaceful, West Bengal state in eastern India is an exception. Modi is challenged here by Chief Minister Mamata Banerjee, who heads the more inclusive Trinamool Congress party and eyes a chance to go to New Delhi as the opposition's candidate for prime minister.

Modi has visited West Bengal 17 times in an effort to make inroads with his Hindu nationalist agenda that had provoked sporadic violence and prompted the Election Commission to cut off campaigning.

"People are divided for many reasons, we have to wait for a final outcome to see who people are voting for. Things are not predictable like before," he said.

Minorities in India, especially Muslims who comprise about 14 percent of India's 1.3 billion people, criticize Modi for his Hindu nationalist agenda. Modi has issues to deal with neighboring Muslim-majority Bangladesh because his party backed a bill that would make it easier to deport millions of Bangladeshis who migrated to India since Bangladesh's independence in 1971. The bill, however, eases a path to citizenship for Hindus, Sikhs, Parsees and Jains — non-Muslims — who came from Afghanistan, Bangladesh and Pakistan over decades.

Voters were also up early in Varanasi in Uttar Pradesh state, where election workers arranged for drinking water, shade and fans to cool them down.

"I straightaway came from morning walk to cast my vote and was surprised to see enthusiasm among the voters," said Ramesh Kumar Singh, who was among the first ones to vote. "There were long queues of people waiting patiently to cast their votes, which is a good sign for democracy."

The election is seen as a referendum on Modi's five-year rule. He also played up the threat of Pakistan, India's Muslim-majority neighbor and archrival, especially after the suicide bombing of a paramilitary convoy on Feb. 14 that killed 40 Indian soldiers.

The BJP's main opposition is Congress party, led by Rahul Gandhi, the scion of the Nehru-Gandhi dynasty that has produced three prime ministers. Congress and other opposition parties have challenged Modi over a high unemployment rate of 6.1% and farmers' distress aggravated by low crop prices.

Some of Modi's boldest policy steps, such as the demonetization of high currency notes to curb black-market money and bring a large number of people into tax net, proved to be economically damaging. A haphazard implementation of "one nation, one tax"— goods and services tax —also hit small and medium businesses.

Voter turnout in the first six rounds was approximately 66%, the Election Commission said, up slightly from 58% in the last national vote in 2014.

Pre-election poll surveys by the media indicate that no party is likely to win anything close to a majority in Parliament with 543 seats. The BJP, which won a majority of 282 seats in 2014, may need some regional parties as allies to stay in power.

A Congress-led government will require a major electoral upset.