Final vote test in Germany ahead of post-Merkel-era election

Germans in the eastern state of Saxony-Anhalt are heading to the polls on Sunday, with the far-right posing a tough challenge to Angela Merkel's conservatives in the final major test before the first general election in 16 years not to feature the veteran chancellor. 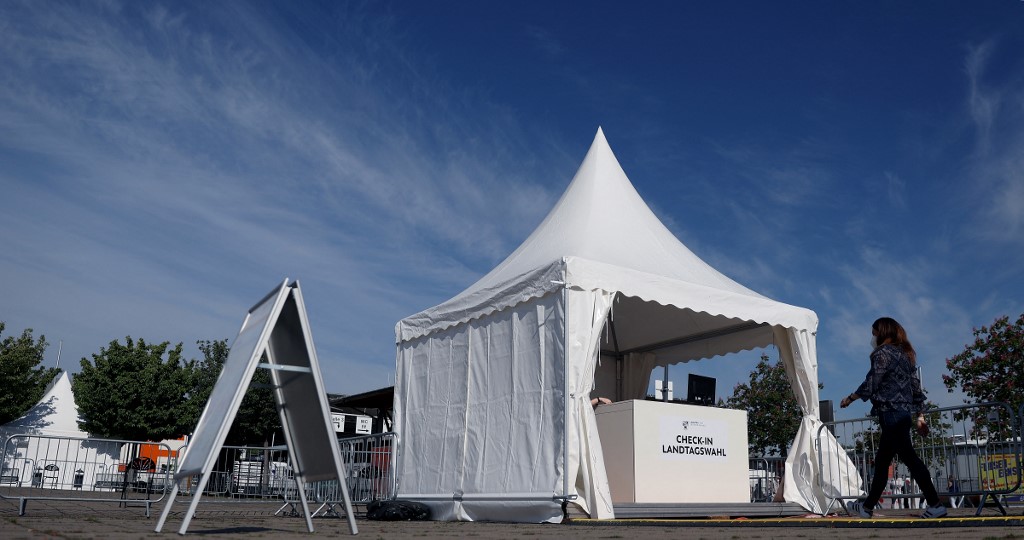 A sign reading 'Check-in Landtagswahl' is pictured at the entrance of the fair halls where television studios and media rooms are set up for the regional elections in Saxony-Anhalt, on June 3, 2021 in Magdeburg, eastern Germany. (Photo: AFP)

Saxony-Anhalt is one of Germany's smallest states with a population of just 2.2 million, but with Merkel's Christian Democratic Union running neck-and-neck with the far-right AfD there, the stakes could not be higher for the regional vote.

Victory for the AfD would be a devastating blow for the conservatives and seriously weaken the already fragile standing of the CDU's new leader Armin Laschet in the run-up to Germany's national election on September 26.

"If it turns out that the AfD is slightly stronger than the CDU on Sunday, then there could be debates about personnel in the CDU, and thus a weakening of the entire situation of the CDU," political scientist Hajo Funke of Berlin's Free University told AFP.

Merkel's party has been a dominant force in the eastern region for decades, topping all but one edition of state elections there since reunification in 1990.

But the far-right AfD established a strong foothold there in the last state election in 2016, having capitalised on anger over Merkel's decision to allow in a wave of migrants from conflict-torn countries such as Syria in 2015.

In that election, the CDU scooped 30 percent, forming a coalition with the Social Democrats (SPD) and Greens. The AfD won 24 percent.

Latest polls published Friday by Bild daily has the CDU at 27 percent, one point ahead of the AfD.

Although support for the AfD at the national level has stagnated at around 10 to 12 percent in recent months, the party continues to be popular in the former East German states.

Its recent move to style itself as the party bashing Merkel's tough shutdown measures during the pandemic has also cemented its reputation as the anti-establishment party, attracting support beyond its core base of anti-immigration voters.

The AfD will not be able to govern even if it wins in Saxony-Anhalt, as all the other parties have ruled out forming an alliance with it.

But losing to the AfD would be, as Spiegel magazine puts it, "a disaster" for Laschet -- nominated as the conservative chancellor candidate in April.

"Laschet urgently needs a success to rally the Union behind him for the national election campaign," said the magazine.

"The last thing he would need is a renewed debate about the AfD within his party, which would become unstoppable in case of an election defeat in Saxony-Anhalt."

The conservatives have already taken a hammering in the polls as Merkel prepares to bow out, hurt by anger over the government's pandemic management and a corruption scandal involving shady coronavirus mask contracts.

At Germany's last regional elections in March -- in the states of Rhineland Palatinate and Baden-Wuerttemberg -- the CDU suffered its worst ever results in both states.

Meanwhile, the Greens, who are vying for top place nationally, could also draw votes away from the CDU.

The party, which has traditionally struggled in the former East Germany, looks set to double its share of the vote in Saxony-Anhalt from 5 percent in 2016 to around 10 percent this time.

The CDU, which Merkel has pulled closer to the centre, is essentially caught between the two fronts -- with the far-right AfD on one end and the centre-left ecologists on the other.

Laschet has promised to maintain CDU as the "force of the political middleground".

But political analyst Oskar Niedermayer told AFP that the reality is that voters in the east tend to be "more conservative and more nationalist" than in the west.

This means that the CDU needs to "set different thematic priorities in the east and in the west" if it wants to maintain its broad base of support, he said.