Talking to the media at noon, Rinne said he has accepted the resignation of Sirpa Paatero, Minister of Local Government and Ownership Steering, who is currently on sick leave.

He said Paatero had not efficiently communicated the government views on labor relations with the state-owned postal company Posti.

A two-week postal strike ended on Wednesday, as the Finnish Post and Logistics Union (PAU) and the employer's organization Palta reached an agreement at the national labor conciliator's office.

Under the deal, 700 parcel sorters whose terms of work had been worsened in September will return to their previous contractual situation.

The postal strike began on Nov. 11, with more than 9,000 workers involved, as Posti decided in September to cut the salaries of some 700 postal workers by 30 percent.

Paatero, a member of the Finnish Social Democratic Party, is viewed as a close ally of Rinne, who has been the leader of the party since 2014. The opposition has demanded that Rinne should also resign. 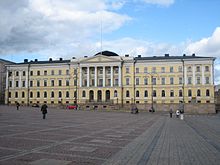