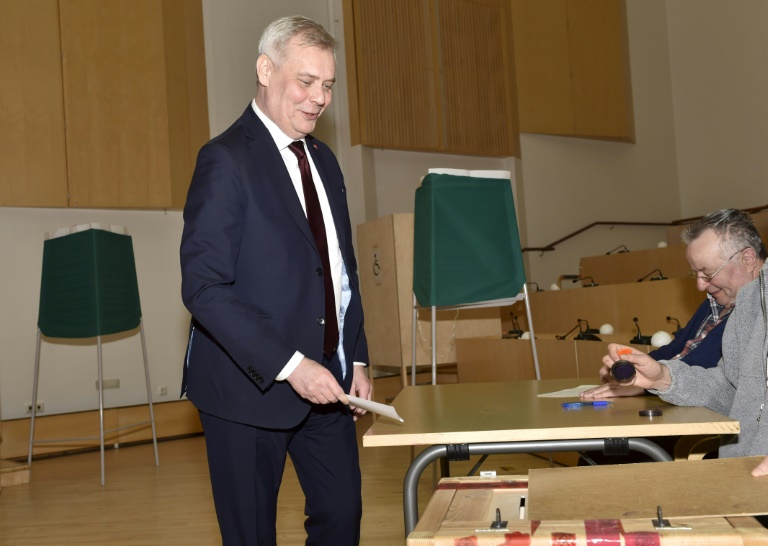 Finns voted on Sunday in a general election where anti-austerity sentiment looked set to propel the opposition Social Democratic Party back to the head of government for the first time in 16 years.

The left-wing party leads Finland's two main opinion polls with about 19 percent of the vote, having campaigned against the steep cost-cutting of Centre Party Prime Minister Juha Sipila and his Finance Minister Petteri Orpo -- leader of the conservative National Coalition Party.

But the far-right Finns Party, led by hardline MEP Jussi Halla-aho, has seen a surge in support in recent months during an anti-immigration dominated campaign, urging people to "Vote for some borders".

Polls show the Finns Party ending up in second or third place, meaning it could hold significant influence in the talks to form the next government, which in Finland is typically a coalition of three or four parties.

Outside a polling station in central Helsinki on Sunday morning, a local resident who gave her name as Jenny said that she had only settled on who to vote for at the last minute.

"There have been a lot of cuts and some, like education, in areas they promised they wouldn't cut. Of course, the parties from the last government are going to suffer because of that now," she told AFP.

Petteri Orpo, leader of the conservative National Coalition Party and co-architect of the government's savings programme, has denounced the Social Democratic Party's anti-austerity plans as "irresponsible".

However, in a tacit acknowledgement that the public mood is against further belt-tightening, Orpo has insisted the economy is now strong enough to allow for some more generous public spending.

The heated debate in the run-up to the vote led some analysts to predict that turnout will be high. A record 1.5 million Finns -- over a third of the electorate -- had already cast their vote in advance of polling day. On Sunday, queues were reported at some polling stations in the capital.

Around lunchtime the leaders of the main parties were seen casting their ballots in their constituencies: Halla-aho in Helsinki, Rinne in the town of Mantsala in the south, and Petteri Orpo in the southwest city of Turku.

Opinion polls suggest the Social Democrats' lead has narrowed in recent weeks to as little as two points, ahead of the National Coalition and Finns Party which are battling it out for second place.

Some have blamed the shrinking lead on the inability of party leader Antti Rinne, a 56-year-old former trade union boss, to attract large numbers of new, younger voters.

The growing Finns Party ratings, on the other hand, appear to be driven by new supporters who have not voted in the past.

At a Finns Party rally on the eve of the vote in Myyrmaki, a disadvantaged suburb of the capital, a crowd of people, young and old, clamoured around party leader Jussi Halla-aho, asking for autographs and congratulating him on the campaign.

"You will be the next prime minister," one woman assured him.

Forecasts suggest no party is likely to draw more than 20 percent of the vote, meaning the result could be historically close.

This could make the negotiations to build a government coalition particularly tricky.

The major parties have all expressed strong reservations about joining a government with the Finns Party, whose policies lurched to the right after Halla-aho became leader in 2017.

Finland has a rapidly ageing population and declining birth rate, and the question of how to keep funding the country's generous welfare state has been a key election battleground.

Yet the Social Democratic Party may face tough economic conditions in which to implement its anti-austerity promises: many economic forecasts suggest Finland's GDP growth will slow in the coming years.