Finland plans to drastically tighten its restrictions to curb the spread of the novel coronavirus, closing bars and restaurants for three weeks starting March 8 in areas where cases are rising, the government said Thursday. 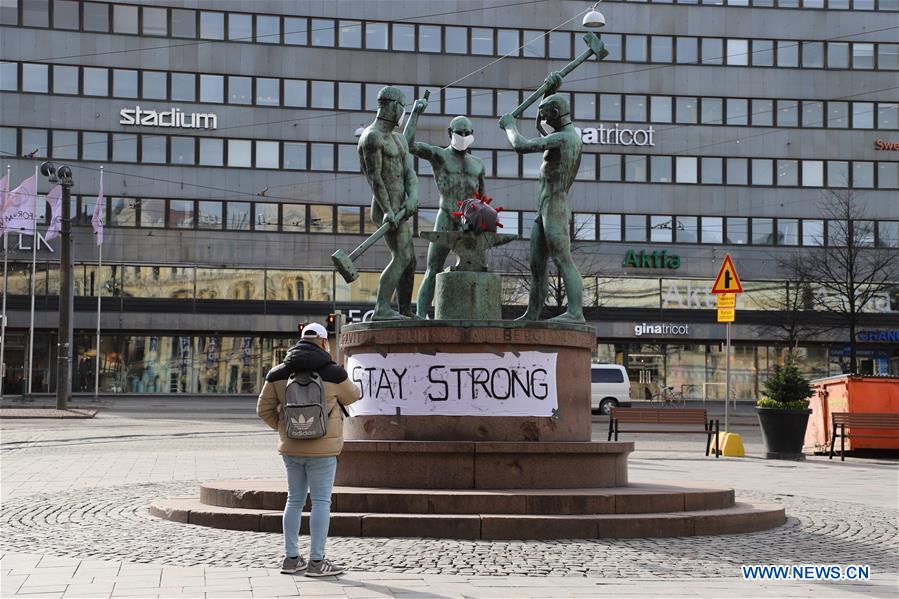 A citizen takes a picture of the famous city sculpture "Three Smiths" which has been put on facial masks, in Helsinki, Finland, March 31, 2020. (Photo: Xinhua)

Students in grades seven to nine will move to distance learning, joining upper secondary schools and universities already doing so, and gatherings will be limited to six people in affected areas, including the capital Helsinki.

"If we wait too long, the situation will get so bad that it will be too late to stop the disease from progressing," Prime Minister Sanna Marin told reporters.

The Nordic country has registered among the fewest Covid-19 cases in Europe, but infections have been on the rise recently, partly attributable to the spread of the UK variant of the virus.

Finland introduced a partial lockdown a year ago, gradually lifting its restrictions a few months later.

Since then, businesses and schools have remained open and there have been few restrictions, as the country has relied on efficient testing and tracing programmes.

However, "our previous tools are no longer enough to control the situation," Marin said Thursday, adding that the UK variant had rapidly exacerbated the situation.

The country has so far detected 690 cases of virus variants, out of a total of around 55,000 cases. Among them, 660 are the UK variant, official data showed on Wednesday.

"The epidemic situation calls for very effective control of the spread of the virus in the coming weeks and months," the government said in a statement.