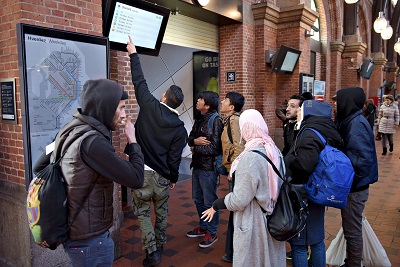 Some refugees from middle east live in Finland. (Photo:VCG)

A Finnish appeal court recently upheld a sentence which doomed a 23-year-old male 3 years in prison for rape charges. According to Finnish tabloid Daily Iltalehti (IL),the male asylum seeker faced rape charges for sexually assaulting a 10-year-old girl. Pirkanmaa court did slap the accused with a three-year prison sentence for sexual abuse of the child which took place back in 2016.But the appeal court upheld the sentence.

The case generated outrage when the lower court ruled that there was insufficient evidence that the child resisted the man's advances. Meanwhile the appeal court also found that the victim was not powerless in the situation, and defined powerless as resulting in illness, disability or narcotic substance.

IL writes that Criminal and Procedural Law Professor Matti Tolvanen challenged the courts' rulings, saying that the law does not consider the victim's age and stage of development in evaluating powerlessness.

Tolvanen noted that current laws define 16 as the age below which the rape of an under-18-year old is considered an aggravated offence, but does not consider the child's age and level of development in determining how far the victim is capable of resisting sexual violence. He also referenced research showing that children aged 6 – 8 do not yet understand the nature of a sexual act.

According to IL, as far as current legislation is concerned, a rape verdict requires violence or the threat of violence and this also applies to offences involving children. The newspaper notes that cases of sexual violence targeting children rarely result in a rape conviction, but mostly meet the criteria for sexual abuse or aggravated sexual abuse.

"If this situation doesn't have the essential elements of a rape offence, then yes we should consider changing the law," said Professor of Criminal Law Matti Tolvanen.