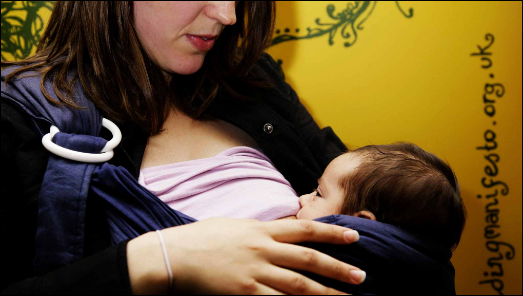 Although Finnish women breastfeed their children for longer on average than counterparts in many other European countries, breastfeeding rates are lower in Finland than other Nordic countries. (Photo: VCG)

Finnish health officials are demanding a law to protect breastfeeding mothers from being driven out of public places, including restaurants and coffee shops, in one of western Europe's most gender equal nations.

Now campaigners have launched a petition in support of the proposal, backed by the National Midwifery Association, which was signed by 1,000 people on Thursday.

If it gathers 50,000 signatures within six months, lawmakers will be forced to debate the issue in the parliament.

"I'm worried that the general attitude regarding breastfeeding is not very good at the moment," petition co-organizer Kati Bhattacharya, a student and nurse in Helsinki, said.

Although Finnish women breastfeed their children for longer on average than counterparts in many other European countries, THL says breastfeeding rates are lower in Finland than other Nordic countries.

Officials say that negative public attitudes to mothers nursing their babies are partly to blame.

A case last year of a breastfeeding mother in a restaurant who was asked by staff to either go into the toilet or downstairs made headlines and generated vigorous online debate in Finland.

The establishment, in the southern town of Tampere, later told media they asked the woman to move so as not to upset other customers.

"Some people say that breastfeeding mothers should be discreet to make sure people don't get upset," Bhattacharya said.

"I think it should be the other way round, that other people shouldn't be offended by mothers doing the most natural thing in the world," she added.

The proposed law guaranteeing the right to breastfeed in public would bring Finland into line with countries such as the UK and the US, where it is now illegal for business owners to discriminate against breastfeeding mothers.