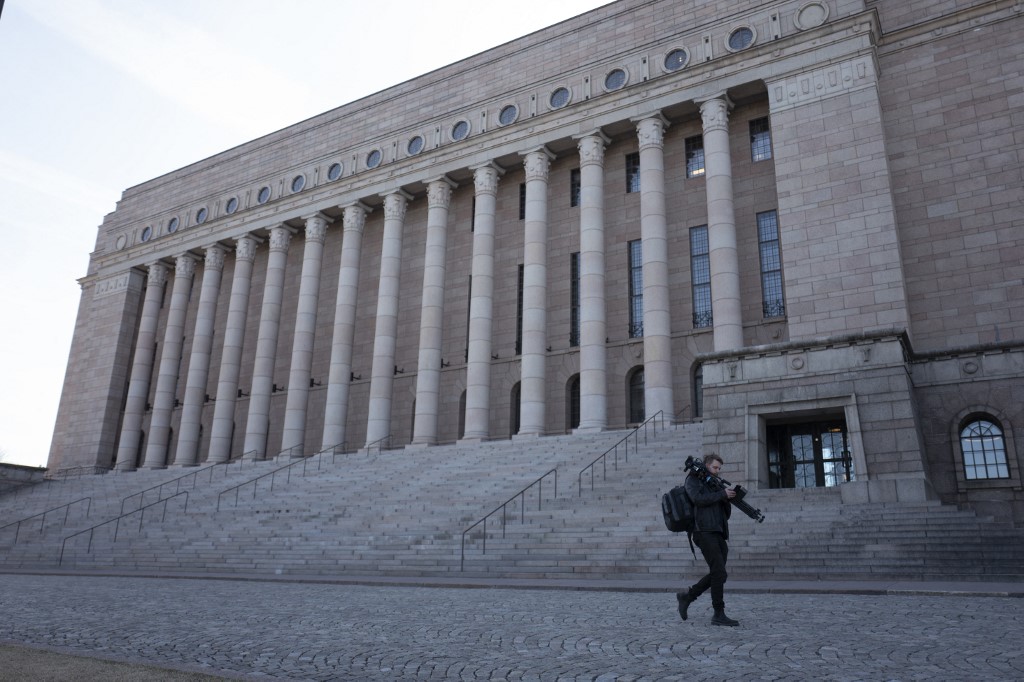 Journalists walk outside Finnish Parliament, during the debate to apply to join NATO , On April 20, 2022 in Helsinki. (Photo: AFP)

In the document, the cabinet took no stand on the membership but said membership of Finland and Sweden in NATO would reduce tension in the Baltic basin area in the long term.

The parliament discussion of the security report is expected to last a long time. The Parliament will not at this stage vote on the Finnish NATO membership, but the matter reverts back to the cabinet and the president.

The parliamentary vote would occur at the end of the would-be application process as Finland ratifies the agreement to join.

Addressing the parliament, Prime Minister Sanna Marin expressed the hope that the parliament would debate the matter, showing respect to different views. "Unity is the best guarantee for security," she said.

"The time for decisions has come," Marin said. She elaborated that following recent decisions to boost defense, including a major air force investment, it is now time to talk about NATO membership. Marin has not published her personal view on the NATO issue yet.

Foreign Minister Pekka Haavisto underlined the importance of roughly simultaneous decisions by Finland and Sweden. He said that parallel processes in joining NATO would ease responding to a possible reaction by Russia. "Same pace" in the Finnish and Swedish processes was also echoed by Antti Lindtman, the chair of the Social Democratic parliamentary group.

"RUSSIA WILL ALWAYS BE OUR NEIGHBOR"

Foreign Minister Haavisto also took up the need to keep in contact with Russia in the future. "Russia will always be a neighbor to Finland, and effort must be made to maintain functioning relations with Russia," said Haavisto, adding that Finnish decisions are not directed against anyone.

Tuomioja said that a long-term view, both forward and backward, is needed. "The consideration of all good and bad aspects and risks must now be assessed by parliament," Tuomioja said, adding that he would base his stand on what information and answers will be obtained during the process.

In their speeches Wednesday, many MPs have considered NATO membership to be a justified choice for Finland in the parliamentary debate on the security report.

Centrist Defence Minister Antti Kaikkonen said the most important impact of the NATO membership would be that Finland would be part of joint defense and within security guarantees. "The impediment against attacking Finland would increase," he said.

Kaikkonen added that general conscription, trained reserve, and high appreciation of national defense by the population would be cornerstones of Finnish defense also in the future.

It was previously reported that there were opposing opinions to Finland joining NATO because, with NATO membership, Finland would have to send troops to participate in NATO operations.

Finland would itself decide whether Finnish soldiers are sent to NATO operations abroad, Kaikkonen said.

Still, some speakers were concerned about the military alliance.

The solution to applying for NATO is for many to choose between two bad options, said national broadcaster Yle in an analytical article Wednesday.

Jussi Saramo, chairman of the Left Alliance parliamentary group, said the negative sides of becoming militarily allied have not been sufficiently focused on in the debate. As a NATO member, "Finland would be a potential target of a first strike," said Saramo.