Fire caused by oil pipeline explosion in Nigeria put out 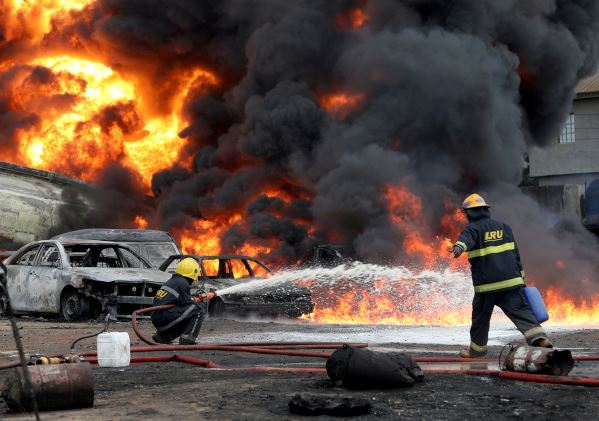 A fireman targets his water hose at the base of a fire after a pipeline fire erupted in Ijegun area of Lagos, Nigeria, July 4, 2019. (Photo: VCG)

Fire caused by an oil pipeline explosion Thursday in a satellite town of Lagos, Nigeria's economic hub, has been put out, according to the Lagos state government.

The fire, which occurred along the state-run oil company's pipeline at Ijegun town at 5 a.m., was reportedly caused by vandals who were stealing oil from the pipeline, the state government said in a statement.

"It was gathered that the vandals had already siphoned petrol into a 33,000-liter tanker," the statement said.

While a second tanker of the same capacity was being loaded, security agencies intercepted them, the statement added.

Some of the siphoned fuel spilled into the drainage and some vandals, while trying to escape, were alleged to have set the spilled oil on fire to prevent the security guards from apprehending them.

"Thereafter, the fire spread back to the point where the vandals had siphoned the fuel causing explosion which escalated the fire," the statement said.

Oloruntoyin Kudus, a resident at the affected area, told Xinhua that some people died in the explosion.

Lagos-based radio stations reported that two unidentified bodies were seen and many vehicles and shops were burnt in the raging fire.

The statement did not say how many people were hurt in the incident, but said actual loss will be determined upon conducting post-disaster enumeration after the fire is put out.

Maikanti Baru, head of the Nigerian National Petroleum Corporation, said in Abuja, the nation's capital, that he has dispatched engineers to the scene to redress the situation.