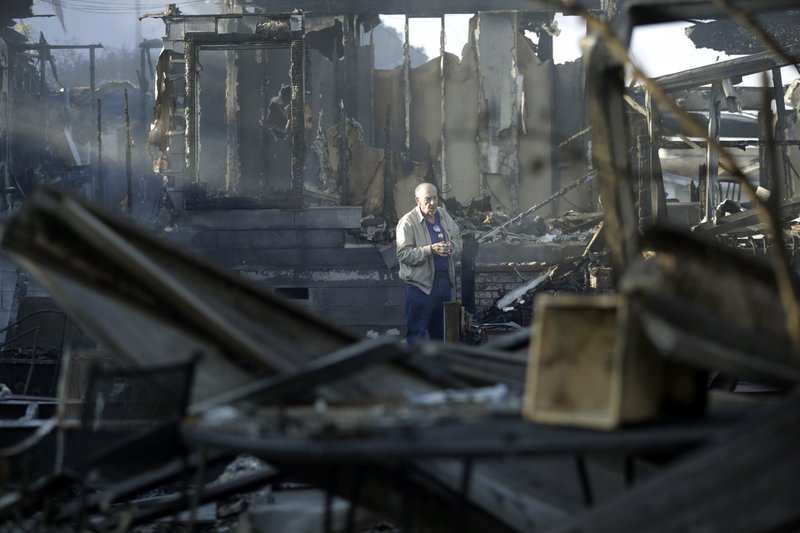 Flames engulfed retirement communities built on golf courses, thoroughbreds in racehorse stables and other usually serene sites as the San Diego area became the latest front in California’s wildfire fight.The fire broke out Thursday amid dry, windy conditions that would be extreme for any season but are especially stunning just two weeks from winter.It grew to 6 square miles (16 square kilometers) in a matter of hours and burned dozens of houses as flames tore through the tightly packed Rancho Monserate Country Club community in the small city of Fallbrook, known for its avocado orchards and horse ranches.Three people were burned while escaping the flames and at least 85 buildings were destroyed, authorities said. Out of 10,000 people who fled homes, about 900 were in shelters.Trees were charred for miles along a winding highway in the community of Bonsall and some houses lay in ruins on a road not far off. At one home, a goose and a rooster remained, the latter crowing repeatedly Friday.The fire, on the eastern border of the Marine Corps’ Camp Pendleton, was uncontained, although winds subsided significantly overnight. Forecasters said they would return later in the day but be less widespread.Authorities said 1,000 firefighters battled the flames with help from a fleet of air tankers and helicopters. Significant resources also were being deployed to stamp out a new, small fire that began to the east in the Cleveland National Forest near the mountain town of Alpine.Meanwhile, firefighters northwest of Los Angeles gained some control over the largest and most destructive fire in the state, which has destroyed 430 buildings. The blaze in Ventura County has grown to 206 square miles (533 square kilometers) since igniting Monday.Fire crews also made enough progress against other large fires around LA to lift most evacuation orders.The fire 50 miles (80 kilometers) north of San Diego razed rows of trailer homes in the retirement community, leaving charred and mangled metal in its wake. It wasn’t immediately known what sparked the blaze next to State Highway 76, but strong winds carried it across six lanes to the other side.Cynthia Olvera, 20, took shelter at Fallbrook High School.She had been at her Bonsall home with her younger sister and nephew when her father called from the family nursery to say the fire had reached the gate of their sprawling property.After starting to drive away, the family turned around to recover forgotten personal documents — but it was too late. Trees were ablaze and flames were within 10 feet (3 meters) of the house.“I didn’t think it would move that fast,” she said.Her older sister wanted to drive in to save her husband’s car, but Olvera told her: “Don’t do it. It’s not worth it.”Her sister heeded the advice and the family made it safely to the school. But the flames followed them, and the family had to pack up again when evacuation orders came for the high school.The family went to a second shelter, not knowing if their house survived.As the flames approached the elite San Luis Rey Downs training facility for thoroughbreds, many of the more than 450 horses were cut loose to prevent them from being trapped in their stables, said Mac McBride of the Del Mar Thoroughbred Club.Herds of horses galloped past flaming palm trees in their chaotic escape of a normally idyllic place.Horse trainer Scott Hansen said he knows that some of his 30 horses at the facility died.“I don’t know how many are living and how many are dead,” he said.The California Horse Racing Board said about 25 horses were killed when eight barns burned and others in adjacent pastures were unaccounted for. Surviving horses were taken to Del Mar racetrack and all of Friday’s races at Los Alamitos Race Course were canceled as the racing community mourned.Along the coast between Ventura and Santa Barbara, tiny communities had so far survived close calls. Slopes along U.S. 101 were blackened, but homes still stood at La Conchita and Faria Beach. Sections of Carpinteria were under mandatory or voluntary evacuation orders, but no flames were in sight.Inland, the biggest fire burned in mountains near the town of Fillmore, but only outlying areas were evacuated. It also remained a threat to Ojai, a scenic mountain town of 7,000 people dubbed “Shangri-La” and known for its boutique hotels and New Age spiritual retreats.Ash fell like snowflakes on citrus orchards scattered around town Thursday and on Spanish-style architecture. Some businesses closed, but staples could be found at Pat’s Liquor, where Hank Cheyne-Garcia loaded up with supplies to fuel through another edgy night keeping watch on the fire.“It got a little too intense yesterday with the wind kicking up,” he said. “There was just so much smoke. Yesterday you couldn’t see the street.”