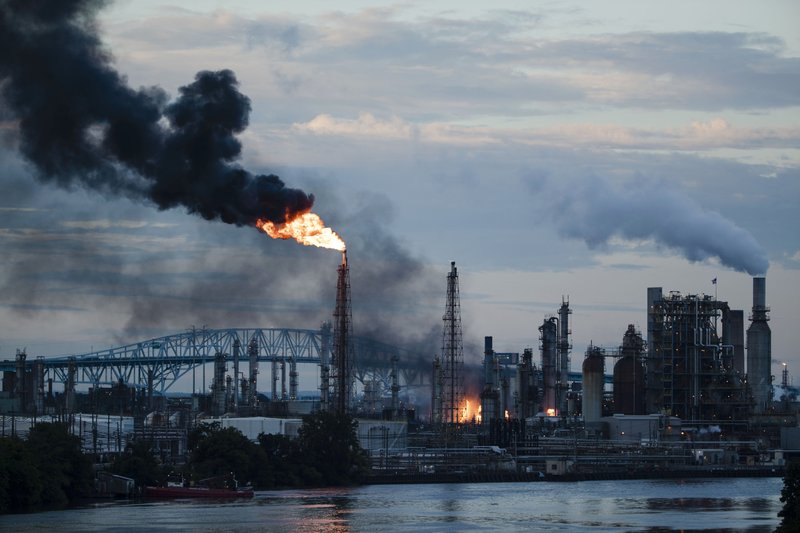 A fire at the largest oil refinery on the East Coast turned the early morning sky a bright orange and yellow and awakened startled residents with explosions that shook homes Friday.

The fire broke out at the Philadelphia Energy Solutions Refining Complex around 4am, spokeswoman Cherice Corley said.

By 9am, emergency workers were still trying to control the fire, said Corley. Nearby residents were asked to shelter in place, and roads around the complex were closed to traffic.

News video shows a massive fireball shooting flames into the sky. There are four confirmed injuries, all minor, that were treated on site.

The cause of Friday’s fire was still unclear late Friday morning. Corley said three explosions, felt for miles away, went off as the fire worked its way through the tangle of pipes carrying fuel across the complex. It happened at the Girard Point refinery, one of two at the PES complex in southern Philadelphia.

The company said it has not determined what exactly caught fire, but it believes it was mostly propane. Earlier, a Philadelphia Fire Department official had said the fire started in a vat of butane.

It was the second blaze at the refinery this month, following a June 10 fire in which no injuries were reported.

Plant and city firefighters were cooling down nearby tanks to prevent the fire from spreading.

“We’re here in support of the Philadelphia Energy Solution (crews),” Craig Murphy, the city’s deputy fire commissioner, told a media briefing at the site. “The fire is now different from when we got here.”

Thick, black smoke billowed across the city when the fire started.

“The whole sky lit up yellow,” Antonio Tindle told WPVI-TV. “The third explosion rocked my truck. The whole truck started to rock and it got kind of scary,” he said.

Mark Broadbent, an analyst who covers refining at Wood Mackenzie, said gas inventory is already low and the blaze “will put additional pressure on the system.”