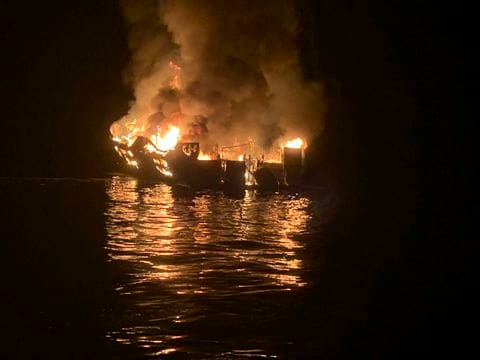 A dive boat is engulfed in flames after a deadly fire broke out aboard the commercial scuba diving vessel off the Southern California Coast. The owners of the dive boat where 34 people perished in a fire off the coast of Southern California filed a legal action in federal court Thursday, Sept. 5, 2019, to head off potentially costly lawsuits. (File photo: AP)

LOS ANGELES (AP) — The crew of a scuba diving boat that sank off the coast of Southern California made several attempts to rescue the 34 people who were trapped below decks by fire, but intense flames drove them back and all perished, federal authorities said Thursday.

All those lost in the Labor Day tragedy aboard the Conception were sleeping in a bunkroom below the main deck when fire broke out around 3 a.m. The captain and four crew were above and survived, and one of the searing questions was whether they tried to help the others before saving themselves.

The crew members told investigators in "very lengthy, detailed, comprehensive interviews" what Jennifer Homendy, a member of the National Transportation Safety Board, called a harrowing story of the moments after the fire erupted on the vessel.

One said he awoke to a noise — but did not hear a smoke alarm — and saw flames "erupting" from the ship's galley below, Homendy said. He tried to get down a ladder, but flames had engulfed it.

Crew members then jumped from the ship's bridge to its main deck — one breaking a leg in the effort — and tried to get through the double doors of the galley, under which the ship's 33 passengers and a 26-year-old crew member slept. A stairway and escape hatch from the bunkroom both exited into the galley.

With the galley's doors on fire, the crew went around to the front of the vessel to try and get through windows but couldn't.

"At that point, due to heat, flames and smoke, the crew had to jump from the boat," Homendy said.

Two swam to the back of the vessel to retrieve a skiff and rescue the remaining crew. They took the skiff to a boat named the Grape Escape that was anchored nearby and called for help and then steered the skiff back toward the burning Conception to see if they could rescue any survivors. None were found.

Earlier this week, Santa Barbara County Sheriff Bill Brown said the captain of Conception made a mayday call before leaving the boat. Brown said it's believed the 34 victims never got out of the bunkroom because flames blocked the stairway and the emergency hatch.

Searchers recovered 33 bodies and continued searching Thursday in the waters just off Santa Cruz Island for the lone remaining victim.

Meantime, the owners of the Conception — Truth Aquatics Inc. of Santa Barbara — filed a lawsuit in U.S. District Court in Los Angeles that uses a pre-Civil War provision of maritime law to limit their liability from any victims' claims. The lawsuit argues the company and owners Glen and Dana Fritzler made the boat seaworthy and the craft was properly manned and equipped.

Coast Guard records show the boat passed its two most recent inspections with no safety violations.

The NTSB is just a few days into what will be a lengthy investigation that seeks to determine the cause of the fire and identify potential safety enhancements to avoid future disasters. They are examining potential ignition sources for the fire, including electronics, kitchen stoves and the vessel's wiring systems. Investigators know photography equipment, batteries and other electronics were stored and plugged in on the Conception.

"We are not ruling anything out at this point," Homendy said.

A day earlier, she toured another Truth Aquatics boat similar to the Conception and said she was concerned about the accessibility of its emergency exit hatch and possible difficulties getting to safety.

None of the names of the victims have been released by authorities but many have surfaced through relatives, friends and employers.

On Thursday, California Gov. Gavin Newsom issued a statement identifying two of the victims as Adrian Dahood-Fritz and her husband, Andrew Fritz. Dahood-Fritz had worked for the California Natural Resources Agency's Ocean Protection Council since April as a senior environmental scientist.

"Adrian led the state's efforts to manage California's network of marine protected areas, and she cared deeply about the ocean and biodiversity," Newsom said. "She embodied marine conservation and was a highly accomplished and respected scientific researcher."

The only crew member to die was Allie Kurtz, 26, who quit her corporate job at Paramount Pictures to work on dive boats. Kurtz, who grew up in Illinois, had recently been promoted to deckhand.

Other victims included two high-schoolers, a hairdresser, a marine biologist, software engineers, a special effects designer for Disney, a nature photographer, a nurse and a family of five celebrating a birthday.

Their common love of scuba diving led them to the ruggedly beautiful coastline of the Channel Islands for a three-day excursion offered by Truth Aquatics, which had compiled a sterling reputation over decades of service. Previous patrons said Truth Aquatics and the captains of its three boats were very safety-conscious.

Cheryl Babineau, owner of Pro Scuba Dive Center in Scotts Valley, California, and a certified diver for 45 years, said what happened aboard the Conception has shaken the industry. She said boat passengers sometimes tune out when the captain and crew members review safety instructions for a dive trip. She expects that will change.

"I think now people will pay a lot more attention," she said.