Fire risks from global warming spread to wet US Northwest 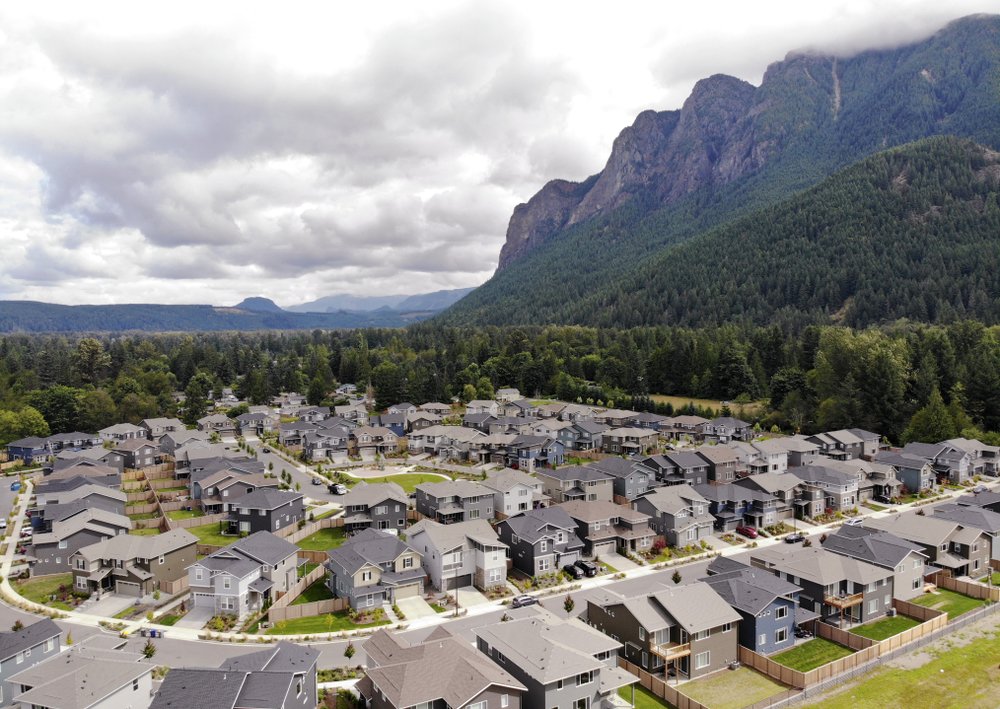 In this photo taken July 24, 2019, a development of houses stand next to a forest and in view of Mt. Si in the Cascade foothills of North Bend, Wash. (Photo: AP)

Nestled in the foothills of Washington’s Cascade Mountains, the bustling Seattle suburb of Issaquah seems an unlikely candidate for anxiety over wildfires.

The region, famous for its rainfall, has long escaped major burns even as global warming has driven an increase in the size and number of wildfires elsewhere in the American West.

But according to experts, previously too-wet-to-burn parts of the Pacific Northwest face an increasing risk of significant wildfires due to changes in its climate driven by the same phenomenon: Global warming is bringing higher temperatures, lower humidity and longer stretches of drought.

And the region is uniquely exposed to the threat, with property owners who are often less prepared for fire than those in drier places and more homes tucked along forests than any other western state.

In Issaquah and towns like it across the region, that takes a shape familiar from recent destructive California wildfires: heavy vegetation that spills into backyards, often pressing against houses in neighborhoods built along mountains, with strong seasonal winds and few roads leading out.

“The only thing that’s keeping it from going off like a nuclear bomb is the weather,” said Chris Dicus, a professor at California Polytechnic State University, San Luis Obispo and head of the Association for Fire Ecology, a national group that studies wildfire and includes experts from the U.S. Forest Service and U.S. Geological Survey.

With historically short summers, the swath of densely forested coastal territory stretching from British Columbia into northwestern Oregon has long been cloaked in a protective veil of moisture, making even medium-sized fires relatively rare. So-called “megafires” — enveloping hundreds of thousands of acres and even generating their own weather — have occurred only at century-plus intervals.

But global warming is changing the region’s seasons. A national climate assessment prepared by 13 federal agencies and released in 2018 said the Pacific Northwest had warmed nearly 2 degrees Fahrenheit since 1900 and that trend would continue into the century, leading to warmer winters and less mountain snowpack.

Experts say these long-term changes create a special risk in Pacific Northwest forests, where past wet weather has created ample fuel for fires: Even a modest increase in contributing factors, like days without rain, could make them much more prone to burning.

“It’s a couple of degrees difference. It’s a couple of weeks’ difference,” said Michael Medler, a fire scientist and chair of the environmental studies department at Western Washington University. “Those are the kinds of changes that amount to taking a forest and pushing it over the edge.”

Exactly when any one part of the region will reach that point is hard to predict, and researchers stressed that unknowns exist in modeling fire in woods that have burned so infrequently. But all pointed to changes already beginning to take place.

This year’s fire danger, for instance, reached above-normal levels in the region a full three months earlier than at any time in more than 10 years, driven partly by an abnormally dry winter.

And fire counts are up: As of late June, western Oregon forests have seen double the average number of fire starts from the previous decade — 48 compared with 20. Western Washington saw an even larger increase, with 194 starts compared with an average of 74.

Even the region around Astoria, Oregon, which frequently gets 100-plus rainy days per year, making it one of the wettest parts of the state, has seen a dozen small fires in 2018 and 2019, according to data from the Oregon Department of Forestry. That compares with an average of just two per year over the previous decade.

Last year, 40% of Washington’s wildfires were on its wetter western side, according to Janet Pearce, a spokeswoman for that state’s natural resources agency.

“That was alarming and a first for us,” she said in an email.

The risk is amplified by development patterns throughout the Pacific Northwest, where experts say the long gaps between major fires have created a perception of the forest as being too wet to burn.

In part due to that perception, the region boasts some of the West’s most concentrated forest-edge development.

A 2013 survey of development within 550 yards (500 meters) of forestlands found that just six counties along the foothills of Washington’s Cascade mountains host more homes in such zones than all of California.

Together, western Washington and the northwest corner of Oregon contained roughly 1,400 square miles (3,626 square kilometers) of forest-edge development — nearly as much as California, Colorado and Montana combined, according to the report by Headwaters Economics, a nonprofit land management research group.

Ray Rasker, who heads the group, cautioned the report was narrower than others, which count development up to 1.5 miles (2.4 kilometers) from any type of wildland. And the results don’t necessarily translate to the Northwest being at higher overall risk, Rasker said, because other types of wild areas are more prone to burning than mature forests.

But while officials in California and other states have begun reforming forest-edge building and landscaping rules, such codes are still rare in the Northwest, and virtually none apply to houses already built, said Tim Ingalsbee, who heads Firefighters United for Safety Ethics and Ecology, an Oregon-based nonprofit that works to update building codes.

“The western slopes of the Cascades and the Northwest are just woefully unprepared,” Ingalsbee said.

When wildfires penetrate neighborhoods, they become much harder to fight.

Fires that did that last year in California destroyed homes and killed residents in cities including Redding, where the Carr fire destroyed over 1,000 homes and forced the evacuation of 38,000, and Paradise, where the Camp fire killed more than 80 people and burned 14,000 homes.

Medler, of Western Washington University, pointed to sprawl radiating from cities in the Northwest’s coastal corridor — such as Seattle — toward the Cascade mountains, which define the region’s eastern edge and stretch from Canada into Oregon.

“The ones that keep me awake at night are places like Issaquah,” said Medler.

The similarities between Paradise before the 2018 Camp fire and present-day Issaquah — a bustling suburban city of 39,000 less than half an hour from Seattle’s downtown — are noticeable.

Both are tucked into foothills. Both feature neighborhoods surrounded by dense forests, some with only a single road leading in or out. And while not as frequent as the seasonal winds that fanned the Camp Fire, the Cascades are also prone to similar strong winds.

The California fires were “absolutely” a wake-up call, said Rich Burke, deputy fire chief with the Eastside Fire Department, which oversees fire protection in Issaquah and the surrounding area.

Wildfire-oriented setbacks and less-flammable materials still aren’t written into building codes on the city’s edges. But Burke said the department now fields frequent calls from homeowners concerned about wildfire protections, hosts preparedness trainings and has four wildland fire engines of its own.

Still, a neighborhood less than a mile from the city’s center reveals what Medler describes as a classic Northwest scene: branches of towering conifers brushing against dozens of wood-sided homes.

Jason Ritchie owns a home just north of Issaquah, in neighboring Sammamish, and said a 2015 fire in the woods beside his property drove home the risks.

“It grew so fast,” Richie said. “Had the wind been blowing from the north to the south, it would have engulfed the neighborhood very, very quickly.”

The neighborhood features many houses built steps from the woods’ edge but only two main routes out, a risk that wasn’t at the front of Richie’s mind when he bought his home.

“If one of those roads gets blocked, we are in a heap of trouble,” he said.

Questions remain about wildfire risks in previously wet forests, in part because they have burned so infrequently in the past, said Crystal Raymond, a fire ecologist with the University of Washington’s Climate Impact Group.

A lack of data makes it difficult to predict exactly how many additional days of summer or drought the region’s forests will tolerate before the risks increase, said Raymond and others.

But experts broadly agreed: Global warming is changing the wet climate of the Pacific Northwest, in ways that will make its forests more likely to burn.

“On the west side, there’s a perception that fire doesn’t happen here — maybe up on the mountains, but not here,” Ingalsbee said. “That was then. This is now.”