Northern California residents relieved that this week's rain helped contain stubborn wildfires and soaked dry gardens were cleaning up Friday and preparing for a massive storm this weekend that could bring flash flooding to vast areas scorched by fire. 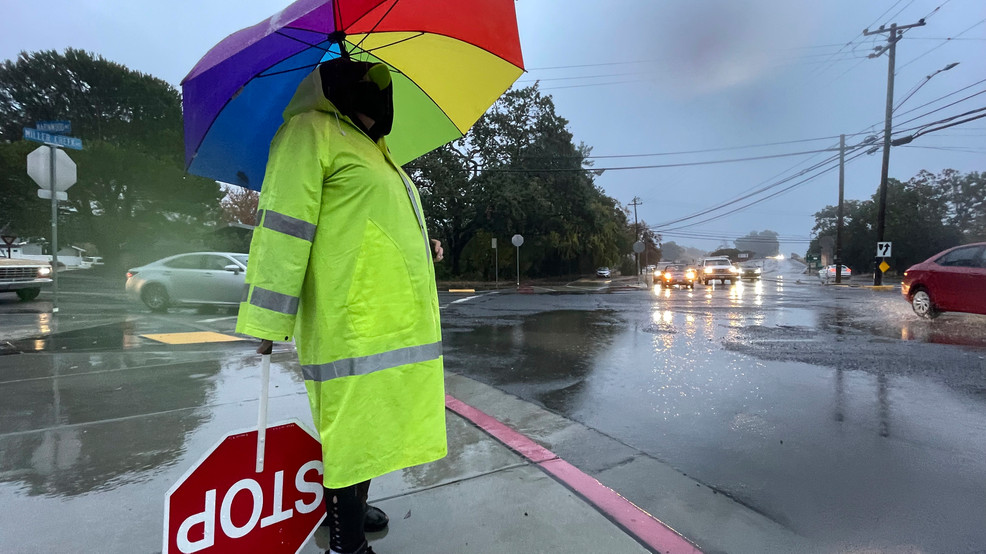 Crossing guard Katy Bredahl is pelted with rain while keeping an eye out for children on Marinwood Avenue in San Rafael, Calif., on Thursday, Oct. 21, 2021. (Photo: AP)

The National Weather Service for the San Francisco Bay Area issued a high surf advisory through Friday for a portion of the coast and a flash flood watch Sunday for parts of the region, especially in areas burned by last year's wildfires. Strong winds are also expected Sunday, with gusts of up to 60 mph (97 kph) at the windiest spots.

The weather service said elevations above 9,000 feet (2,745 meters) in the Sierra Nevada could get 18 inches of snow or more from Sunday until Monday morning and warned of possible power outages and road closures.

Mike Pierre, owner of Mission Ace Hardware and Lumber in Santa Rosa in Sonoma County, said they sold out of tarps this week and expect to do so again in advance of Sunday's big storm.

But there is a feeling of relief that the area could escape wildfire this year, unlike last year when the Glass Fire broke out in late September and destroyed nearly 1,600 homes and other buildings. Customers had been stocking up on generators and power cords to prepare, Pierre said.

"People were bracing for that, and it never happened," he said, "and hopefully, this rain will keep it from happening."

But burn areas remain a concern, as land devoid of vegetation can't soak up heavy rainfall as quickly, increasing the likelihood of mud or debris slides and flash flooding that could trap people.

Paul Lowenthal, an assistant fire marshal with the Santa Rosa Fire Department, said the city is providing free sand and bags for residents who need to control rain run-off. They are also asking residents to clear gutters and on-site storm drains as the city prepares for up to 6 inches (15 centimeters) of rain.

"Given the volume of water we're expecting, we want it to go where it needs to go," he said.

Californians rejoiced when rain started falling this week for the first time in any measurable way since spring. NWS Bay Area tweeted that San Francisco International Airport set a record rainfall for Thursday, with 0.44 inches (1.1 centimeters) of rain tallied. The old record was 0.13 inches (0.3 centimeter) on the same day in 1970.

The storms have helped contain some of the nation's largest wildfires this year, including one that threatened the popular Lake Tahoe resort region this summer. That wildfire is now 100% contained after snow blanketed the western side of the blaze and rain dropped on the eastern side.

But this week's storms won't end drought that's plaguing California and the western United States. California's climate is hotter and drier now and that means the rain and snow that does fall is likely to evaporate or absorb into the soil.

California's 2021 water year, which ended Sept. 30, was the second driest on record and last year's was the fifth driest on record. Some of the state's most important reservoirs are at record low levels. Things are so bad in Lake Mendocino that state officials say it could be dry by next summer.