Rescuers on Sunday pulled the first bodies from a blocked tunnel at a power complex in a northern Indian valley devastated by a flash flood a week ago, where 161 people remain missing. 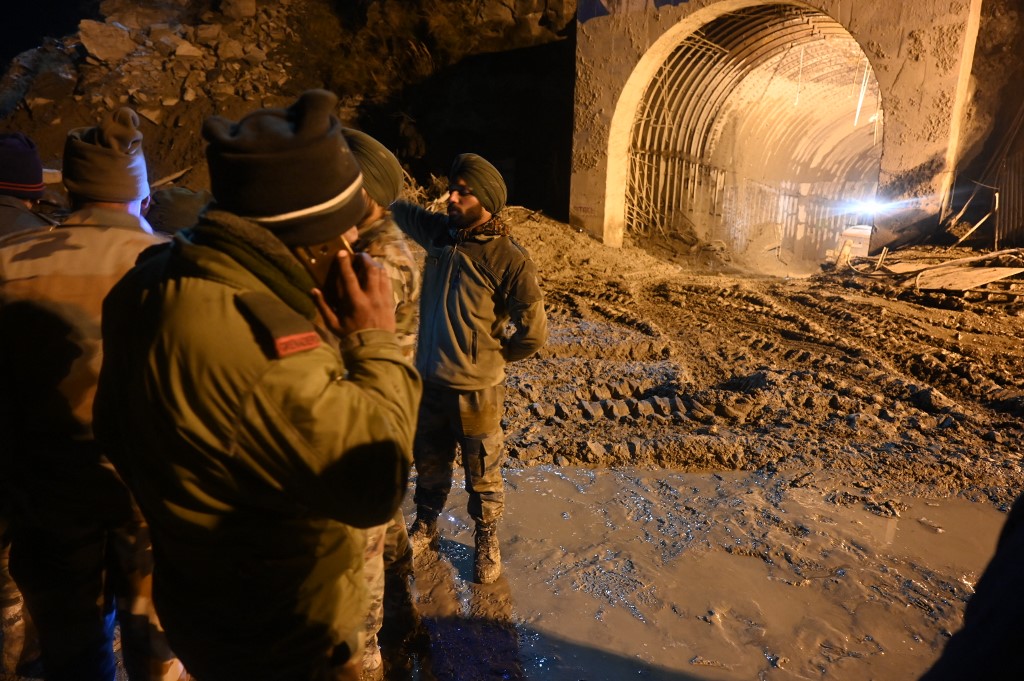 Indian army and rescue teams stand outside the entrance of a tunnel blocked with mud and debris during rescue operations in Tapovan of Chamoli district on February 8, 2021 following a flash flood thought to have been caused when a glacier burst on February 7. (Photo: AFP)

Scores were killed in Uttarakhand state when the deluge -- thought to have been triggered by a chunk of glacier sliding down a mountainside or a glacial lake breaching its banks -- swept down the Rishiganga valley in minutes, destroying roads, bridges and buildings.

Amid warnings that river levels could rise again, the corpses of three victims were retrieved from the tunnel, where at least 30 people are thought to have been trapped by mud and rocks.

Initially there were hopes that those inside might still be alive in air pockets.

Two more bodies were found in a devastated village nearby, police said, bringing the total recovered over the past week to 43.

One of those identified was that of Alam Singh, a father of two.

His family received a call from rescue officials early Sunday telling them that his body had finally been found.

His brother said they would now have to find a way to tell the man's young daughters.

"We were still hoping for the best. But now we have to tell them. He went to work that day like any other day but never did we think this would happen," Surat Singh told AFP.

Rescuers have been working around the clock to clear out mud and debris from the tunnel at the Tapovan hydroelectric plant.

Some relatives have held protests at the entrance accusing authorities of not working fast enough to find the men.

Authorities warned residents of a new rise in the water level but locals still gathered around the tunnel again on Sunday waiting for news.

Many were colleagues of those stuck inside, who escaped when the disaster struck.