First strikes on Syria's Ghouta in days as talks sputter 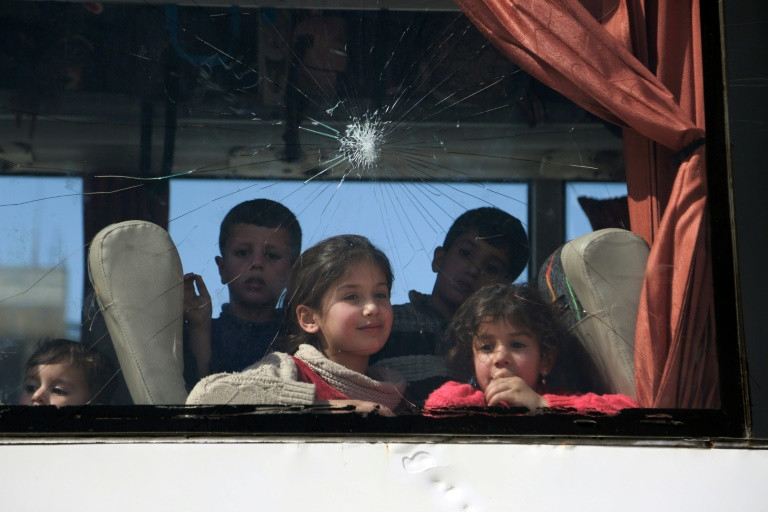 Deadly air strikes slammed into the last opposition-held town in Syria's Eastern Ghouta on Friday for the first time in over a week, after talks sputtered over a rebel withdrawal.

Backed by Russia, Syrian troops had captured all of the one-time opposition stronghold of Ghouta -- except for Douma, its largest town which is held by the Jaish al-Islam Islamist faction.

Jaish al-Islam appeared to have agreed to an evacuation deal, as did other groups in two other areas, and indeed around 4,000 fighters and relatives left the town on Monday.

But the buses at the nearby Wafideen checkpoint stopped filling up, amid reports that the rebel group remained divided and that options other than an evacuation were still on the table.

"There have been 24 air strikes on residential areas in Douma," said Rami Abdel Rahman, head of the Syrian Observatory for Human Rights, a war monitor based in Britain.

He said at least four civilians were killed and 25 wounded.

"There are many injured including women and children, among them critical cases," a member of the White Helmets civil defence organisation told AFP.

The regime and its ally Russia launched a blistering air and ground offensive on Eastern Ghouta in mid-February, killing more than 1,600 civilians and causing an international outcry.

The enclave on the eastern edge of Damascus had escaped government control since 2012 and although it had shrunk over the years, it still covered sizeable territory two months ago.

The daily air raids kept residents cowering in basements for weeks and a ground assault soon sliced the area into three isolated pockets, each held by different rebel factions.

The first two were evacuated under Russian-brokered deals last month that saw thousands of people bussed to the northwestern province of Idlib, which the regime does not control.

Tens of thousands of civilians also fled through humanitarian corridors opened by Russia and are either already returning to their devastated neighbourhoods or staying in crowded shelters.

As talks over the third and final pocket of Douma dragged on, Russia and Syria's regime threatened Jaish al-Islam with a renewed military assault if they did not agree to withdraw.

Those still trapped in Douma had been nervous recently that any attempt to renege on an evacuation would only prompt Russia and the Syrian aviation to resume deadly strikes.

The nature of the ongoing discussions over Douma is unclear and Jaish al-Islam itself has not stated its position since this week's first evacuation.

"It's very tense and there's a lot of confusion. We don't know where we're going, and rumours are flying in the town," said a resident reached by phone who gave his name as Mohammed.

"Waiting for the unknown, with rumours as your only source of information, is worse than the bombardment," said the young man, hours before Friday's fresh strikes.

Jaish al-Islam had been angling for a reconciliation deal that would allow them to stay in Douma as a police force.

The group appears to have little leverage however to face the regime's recovered might, and the latest strikes raised fears of a brutal end to the five-year-old siege of Eastern Ghouta.

"These air strikes are paving the way for a ground operation. Forces are already amassing there and there is massive pressure on Jaish al-Islam," said Nawar Oliver, an analyst at the Omran Institute.

"The negotiations failed and the regime wants its conditions -- the air strikes are a taste of what could happen if its conditions are not implemented," he said.