First US presidential debate 'very unlikely' to shift the race 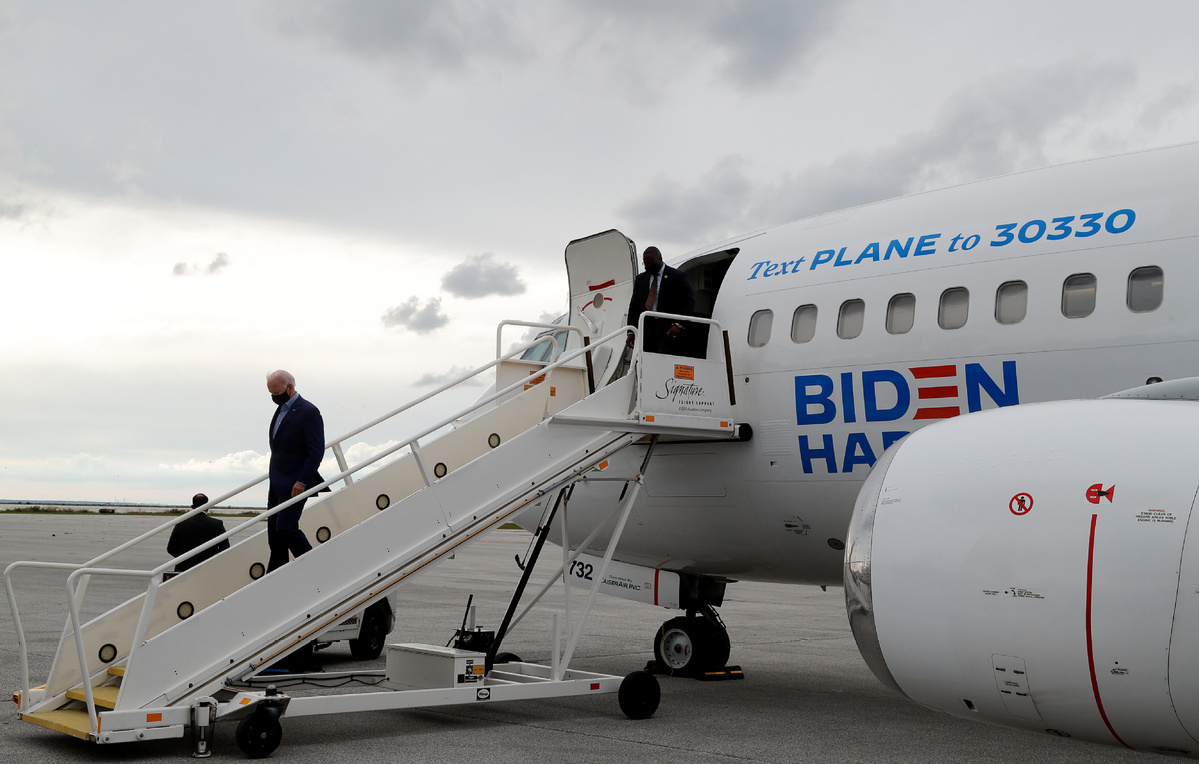 Democratic US presidential nominee Joe Biden disembarks from his new campaign plane as he arrives for his first presidential debate with US President Donald Trump at Cleveland Hopkins International Airport in Cleveland, Ohio, US, September 29, 2020. (Photo: Agencies)

The first presidential debate of the 2020 campaign between President Donald Trump and Democratic challenger Joe Biden on Tuesday night is "very unlikely" to shift the race unless there is a significant error by either participant, experts have predicted.

The 90-minute televised debate, co-hosted by Case Western Reserve University and the Cleveland Clinic in Cleveland, Ohio, will feature 15-minute segments on several topics, including the COVID-19 pandemic, race and violence in cities, election integrity and the economy.

Moderator Chris Wallace of Fox News has said the topics are subject to change, and one expected change will be the inclusion of Trump's federal taxes following The New York Times report on Sunday, which claimed that the president avoided federal taxes and has racked up more than $400 million in debt.

Trump, 74, has denied the Times report, dismissing it as "fake news" at a press conference on Sunday and in a series of tweets on Monday.

"Trump's goal is to make a spectacle, and to fluster Biden into making mistakes. Biden's goal is to be steady, honest and not to ramble in his answers," William Banks, distinguished professor emeritus at Syracuse University College of Law in New York, told China Daily.

Some experts, like David Byler, an election analyst with The Washington Post, have predicted that given past history, it would be normal for the debate to shift the race a couple of points in the direction of one candidate.

With just 35 days until the Nov 3 election, Banks said a shift in the race would be "very unlikely", barring a significant error by either man. National polls and polls of key battleground states show Biden leading Trump.

"It could make a difference in Biden's favor if he can explain succinctly how a president with a $400 million personal debt poses a national security danger," Banks said, referring to the Times report on Trump's taxes.

Hours before his face-off with Trump, Biden and his running mate, US Senator Kamala Harris of California, released their 2019 tax returns, which showed that the Democratic presidential nominee and his wife Jill paid more than $346,000 in federal taxes and other payments last year.

"The American people deserve transparency from their leaders, it's why as of today, I've released 22 years of my tax returns," Biden, 77, tweeted Tuesday afternoon.

A Wall Street Journal/NBC News poll result released on Sept 16 found that 51 percent of registered voters nationally say they would vote for Biden, while 43 percent back Trump, a lead that was largely unchanged from a month ago.

More than 70 percent say the debates won't matter much to them, and only 11 percent in the survey suggest that their vote is up for grabs.

"President Trump is trailing in this race, and time is growing short. He must show, as he has been claiming for months, that Joe Biden is not up to the task of being president," said Cal Jillson, a political scientist and historian at Southern Methodist University in Dallas.

"Biden, on the other hand, must simply perform credibly to show that he is capable of being president. Biden has the easier task," Jillson told China Daily.

Jillson also noted that between 85 and 90 percent of Americans reported they know who they are going to vote for and are unlikely to change their mind.

"While there are a few voters left to be convinced one way or the other, it would take an epic collapse by one or the other of these candidates to change the trajectory of this race," he said.

"As fascinating as the Times reports have been, I don't think they will change the basic shape of the race, except that Trump is behind and he needs to start making up ground. Trump wants to talk about the economy, the Supreme Court and the Middle East; he does not want to talk about the coronavirus or his murky finances," Jillson added.

A senior Trump campaign official told reporters aboard Air Force One that the president "knows exactly what he wants to communicate" and hopes to get into his differences with Biden on trade, "endless wars", the issue of America's "haves and the have nots" and Biden's long career in elective office, Reuters reported.

The debate comes at a time when global coronavirus deaths rose past 1 million on Tuesday, doubling from three months ago. One-fifth of the deaths were logged in the US, where the pandemic is still accelerating.

"Not only has COVID-19 affected the country's health, but it has also hit the labor market hard, leaving many Americans out of work and struggling to balance their finances, child care, and mental well-being,"  Hannah Van Drie, senior coordinator of Center on Children and Families at the Brookings Institution, and Richard Reeves, a senior fellow in economic studies, said on Tuesday in an analysis.

"No doubt, these issues will be top-of-mind for the presidential candidates, especially in their first debate when COVID-19 and the economy are two of the topics for discussion," they wrote.

"What's indisputable is that the US suffered the worst economic shock since the Great Depression. The question is how quickly can we recover — and how our rebound compares to the rest of the world," he said.