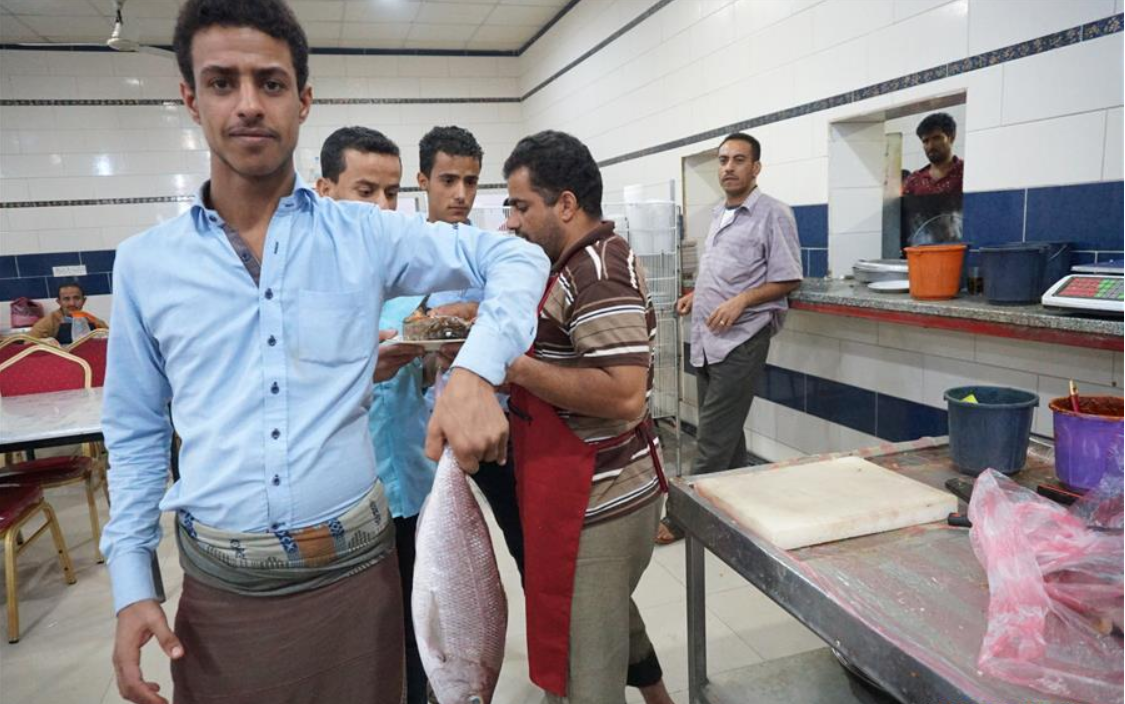 A Yemeni man buys a fish from a popular market in Sanaa, Yemen, on Sept. 28, 2018. In the Houthi-controlled capital Sanaa, fishes are very expensive, with only few middle-class families can afford to buy. Fishermen in the Yemen's port city of Hodeidah have been faced with a difficult choice each morning: either to keep watching their children who are at risk of starving to death or to go fishing under fears of the heavy airstrikes. (Photo: Xinhua)

HODEIDAH, Yemen, Sept. 29 (Xinhua) -- Fishermen in the Yemen's port city of Hodeidah have been faced with a difficult choice each morning: either to keep watching their children who are at risk of starving to death or to go fishing under fears of the heavy airstrikes.

Fishing in the Red Sea is a main source of income for thousands of poor families living in the war-torn city.

Abdullah Ibrahim, in his 30s, is one of the city's fishermen who has lost many of his colleagues under bombardment while fishing off the shore.

"We are suffering...we go for fishing and it could cost us the very high price, the price is our lives," Ibrahim told Xinhua.

"Also there is a naval blockade, if we go fishing today, then the next day we maybe couldn't," Ibrahim said while he was leaning on his wooden boat.

"Life becomes very difficult and there is no other work instead," Ibrahim added.

Since June, the Saudi-led coalition has regularly issued warnings to fishermen to keep away from battleships and military zones off Hodeidah shore.

The warplanes, Apache helicopters, battleships, artillery forces have sustainedly hit inside the city.

The coalition has so far kept the city's port open for aid and commercial ships.

Ten days ago, a frigate attacked a fishing boat off Hodeidah's Red Sea port of al-Khoukha, killing 18 fishermen and injuring another one, according to the one who survived the attack.

Colonel Turki al-Maliki, the coalition spokesman, said in a statement that such report of some media is "baseless."

Al-Maliki added that "unknown vessel opened fire on the fishermen, killing 17," accusing the Houthi rebels of carrying similar attacks in the past.

Another fisherman, Saeed Ahmed, said fishing has become a nightmare. He expressed his fears that he could lost his life any time on the sea, describing fishing as "road of no return."

The battle for Hodeidah began in June, in which the government forces had advanced from Mocha, a southwestern port city under the government control, to al-Durayhemi and Tahita districts, capturing both areas on the southern and eastern edge of the port city.

The military advance paused shortly in August to allow for more peace efforts by the UN envoy to Yemen, Martin Griffiths, to bring the warring parties to the negotiation table in Geneva.

According to residents in Hodeidah, fighting has intensified since earlier September, following the collapse of the UN-hosted peace talks in Geneva on Sept. 8 as the Houthi rebel delegation did not show up.

Aid agencies in Yemen identified that close to 500,000 people had fled homes in Hodeidah between June and August.

In the Houthi-controlled capital Sanaa, fishes are very expensive, with only few middle-class families can afford to buy.

Fish dealer Ali Jabir said his business has become very weak because of the skyrocketing prices and the decrease of customers.

"The Kilo 16 road, through which the trip from Hodeidah to Sanaa usually takes four-hour drive, has been closed since earlier in September," Jabir said.

"Now we have to drive more than 15 hours through the southeastern mountainous road of Jabal al-Shark to the southern province of Dhamar and then to Sanaa," he added.

Talal al-Mesyabi, a middle-class resident of Sanaa and father of two girls, said he used to buy his family fish everyday three months ago.

"But now, I can afford one fish meal only at the end of the month," Talal said.

Yemen has been locked into a civil war since Iran-backed Shiite Houthi rebels overran much of the country militarily and seized all northern provinces, including the capital Sanaa, in 2014.

The war has killed more than 10,000 people and displaced over three million others.

According to the UN reports, some 18 million of the 29 million Yemenis, including a high proportion of children, are food insecure. More than 8 million of them are severely food insecure, meaning they do not know where their next meal will come from.

The international charity Save The Children also warned that 5.2 million Yemeni children are at risk of famine.