The issue of fishing in Britain's waters is emerging as one of the decisive factors in discussions about Brexit between the United Kingdom and the European Union, as the third round of talks over a post-Brexit trading relationship got under way on Monday. 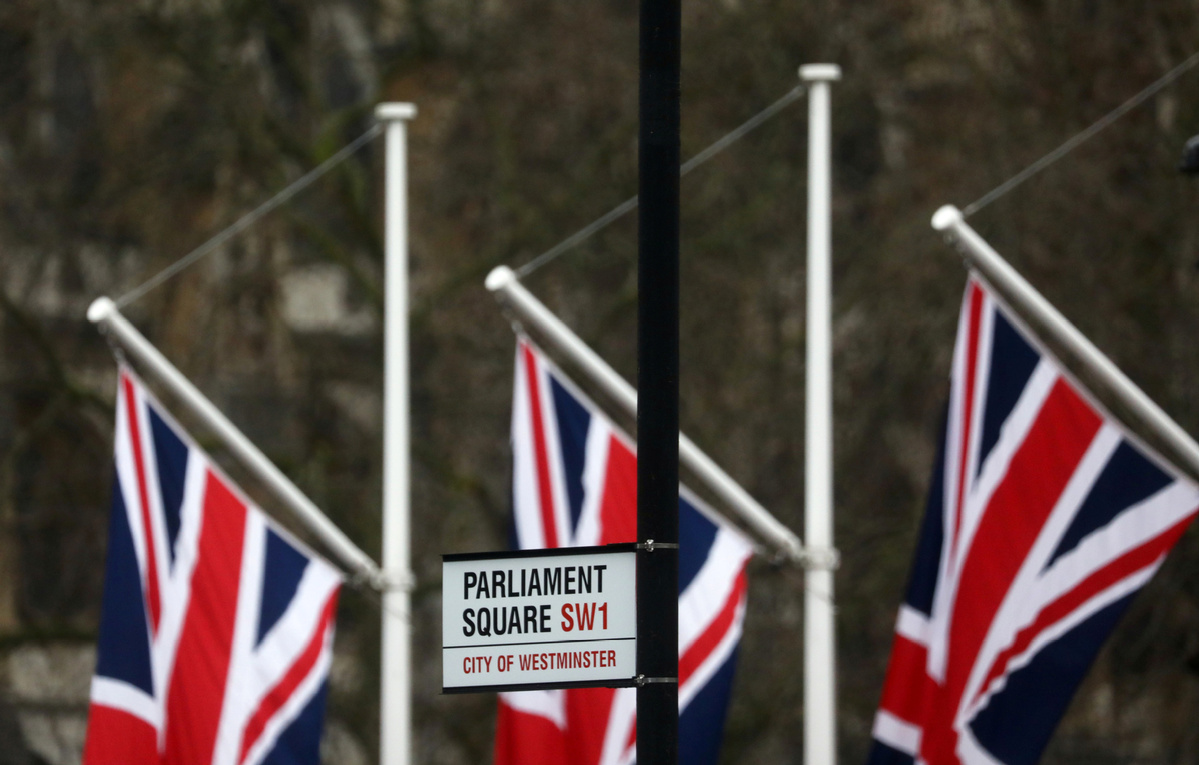 A sign is pictured as British flags flutter at Parliament Square, on Brexit day, in London, Britain January 31, 2020. (Photo: Agencies)

Suggestions from London are that the UK's negotiating team wants to make fishing a separate issue of debate from other key policy areas, such as energy, but EU sources want all issues to be discussed at the same speed, for a more comprehensive agreement.

"We need to see that there is a willingness on the UK side to make progress. We were very disappointed with their attitude in the last round (of talks)," one EU official told the Financial Times. "We need to see progress in parallel on all areas, otherwise the talks will slow down."

Britain formally left the EU at the end of January, with a self-imposed deadline of the end of this year for a trade agreement to be reached. Even before the huge disruption caused by the coronavirus outbreak, that was viewed by Brussels as extremely ambitious.

Despite the upheavals and the huge strain placed on national resources, Prime Minister Boris Johnson's government is showing no sign of flexibility in its determination to cling to the end-of-year deadline. This would increase the prospect of a chaotic no-deal Brexit, with no alternative arrangements in place to replace the complexity and detail of administrative rules and relationships that have built up over previous decades.

EU diplomats believe that any trade deal would probably need to be struck by October to be ratified in time.

Johnson has rejected any long-term arrangements for EU fishing boats to have access to British waters, favoring an annual deal.

"The EU's mandate appears to require us to accept the current quotas agreed under the common fisheries policy," said a Downing Street spokesman after the last round of talks, in April.

"We'll only be able to make progress here based on the reality that the UK will have the right to control access to its waters at the end of this year."

The only kind of agreement acceptable to London, he added, would be one "on the basis of an annual agreement and on an understanding of the fact that the UK would have control of who did and didn't fish in its waters".

According to figures published by the BBC in November 2018, the UK fishing industry employs around 24,000 people, less than 0.1 percent of the national workforce, with its contribution to the economy being 0.12 percent－similar to the timber industry and smaller than the leather goods industry.

But it is the way that certain areas and communities rely so heavily on it for their economic livelihood, and the symbolism of Great Britain as an island separated from mainland Europe and the EU by the sea, that have given the issue such heavy symbolic value.

This is also why it had such a high, emotive profile in the debate before the 2016 referendum on EU membership, and why it retains that position now.

The EU's chief negotiator, Michel Barnier, has accused Britain of abandoning much of the non-binding political declaration on future relations agreed between Johnson and EU leaders last year, and says fragmenting issues, such as fishing, is not acceptable in negotiations.

"Britain is only interested in talking about a couple of things of interest to the UK," said one EU diplomat. "They try to disregard the much broader set of issues laid out in the political declaration."