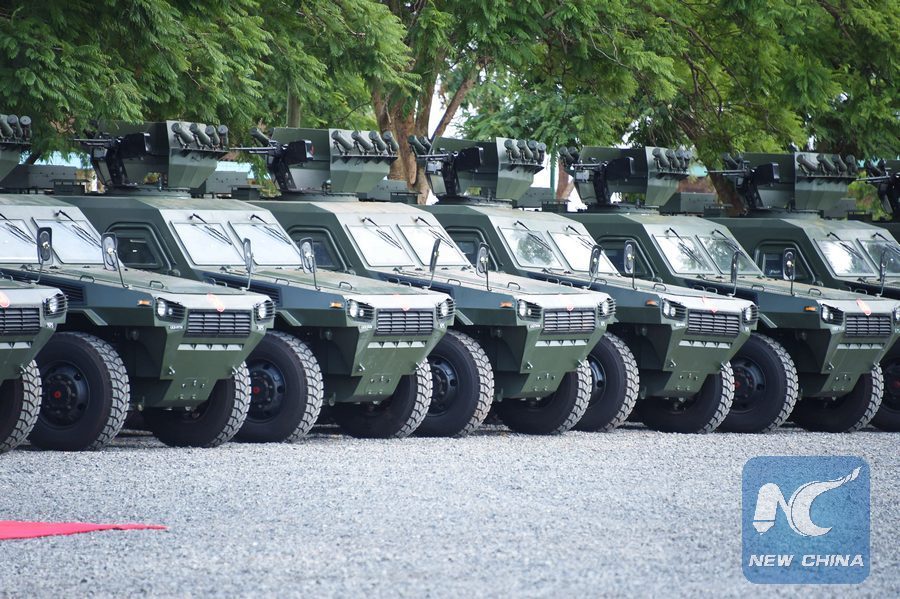 Armed vehicles to be deployed along the volatile border of Kenya and Somalia, where the Kenyan military is fighting the terrorist group Al-Shabaab. Photo: Xinhua/Simbi Kusimba

Kenya Defence Forces (KDF) spokesman David Obonyo said in a statement issued on Sunday evening troops who have been combing the vast Boni Forest engaged the militants in the firefight at around 6 p.m. that saw other terrorists flee with injuries to the general area of Sarira 25 km north of Baure in Lamu County.

"The troops caught up with the terrorists as they tried to get to the Somali border. In the ensuing firefight, suspected bomb making materials that were being ferried in the stolen land cruiser exploded, destroying the vehicle," Obonyo said.

"However, a motorcycle also suspected to have been stolen from Ijara, five A-47 rifles, 13 magazines with 370 rounds of ammunition, two grenades, bomb making materials and personal items were recovered."

The police and intelligence officials said the terrorists who are fleeing increased airstrikes in southern Somalia are trooping to Lakta belt near Boni Forest in Lamu with an aim of attacking locals.

The killings and recovery of stolen items come after authorities said Sunday the security forces were in hot pursuit of Al-Shabaab militants that attacked Ijara police station and made away with a police Land Cruiser.

Northeastern regional commissioner Mohamud Saleh said on Sunday that a contingent of security officers drawn from the KDF, rural border patrol unit and the regal police were in hot pursuit of the militants.

"They (militants) can run but they cannot hide. We will smoke them out of their hideout," Saleh told reporters.

He assured local residents that security agencies were "in control of the situation" and urged them to provide relevant information that will help nab the militants.

But Obonyo said the soldiers are still in pursuit of the militants and appealed to the public for any information regarding suspicious people with bullet wounds seeking medical assistance in their areas.