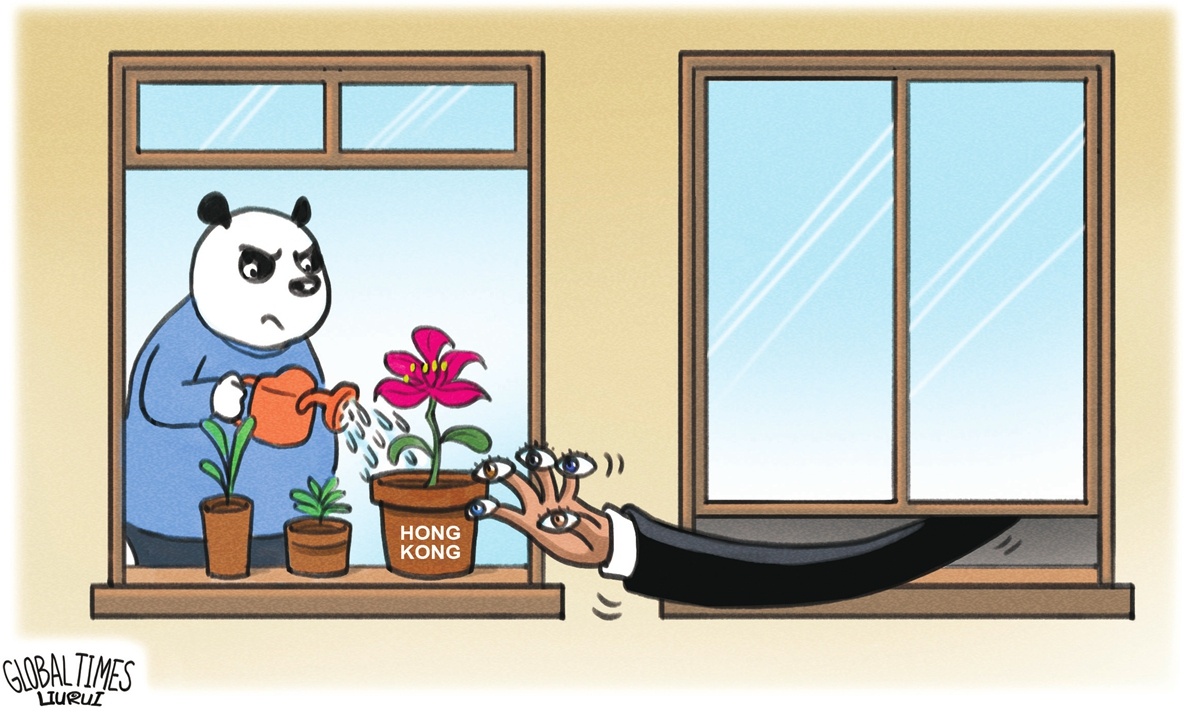 The Five Eyes intelligence-sharing group (consisting of the US, the UK, Canada, Australia, and New Zealand) issued a joint statement in the name of their foreign ministers on Wednesday in which it accused China for disqualifying four legislators in its Hong Kong Special Administrative Region.

"China's action is a clear breach of its international obligations under the legally binding, UN-registered Sino-British Joint Declaration," the statement said.

This was not the first time the five countries took united action against China. In fact, this tiny group, originally designed to share intelligence, has already turned into a loudspeaker for the US' anti-China campaign, as well as a fan club that sets an example for other Western countries how to show loyalty to Washington.

There is nothing but a cliché in this latest statement, which can hardly resonate in the Western world. The Five Eyes is more like a criminal gang in which the US calls the tune and its pawns go fight for it or applaud it. The "little brothers" dare not poke the bubble even if what Washington demands is unreasonable. As time goes by, this has become the "political correctness" in the group.

Canberra has been brutally reshaped by Washington. China-Australia relations used to be good - China has been the largest trading partner to Australia, which is one of the most favored countries by Chinese tourists and students. There is no reason for Australia to have more hatred toward China than many US allies in Europe, even if it doesn't agree with China in some aspects due to ideological differences. However, Australia has become one of the Western countries that have gone too far on the anti-China path.

Countries such as Australia have repeatedly attacked China over human rights and openly interfered in China's internal affairs relating to Xinjiang and Hong Kong. Canberra has accused Beijing of "penetrating operations," but could only provide evidence out of thin air. They don't even see the paradox in this regard: Australia follows the US suit to try to reshape China while groundlessly blaming China for attempting to change Australia itself. Is Canberra so stupid with just a one-track mind? Or is it irrational or shameless?

Many Westerners believe their unilateral intervention in China's internal affairs is "justice." Human rights seem to be an almighty excuse for them. They even define China's promotion of people exchanges as "penetration." The ideological difference is really amazing. It makes some Western people see very rude things as simply natural and reasonable.

The US is leading the Five Eyes alliance to counter China, building up a false appearance that they can overwhelm China with numerical strength. But the combined population of these five countries is just more than 460 million, which is one third of China's 1.4 billion. Another of their illusions is that they think they are the world, while they are only a "handful" of the world. They have long been steeped in self-righteous thought and arrogance, and have a natural displeasure and resistance to the rise of emerging economies.

It is impossible to bridge the value differences between China and the US as well as the Five Eyes alliance, which is also the realistic embodiment of the diversified values of human society. When a conflict happens, it just happens. From a larger historical perspective, as long as the conflict does not lead to catastrophic consequences, it can also be a way for different civilizations to coexist and interact with one another.

China has no reason to compromise with an organization with such racial superiority like the Five Eyes alliance. The way that China governs should be based on a principle to promote its development and progress, rather than on criticism and finger-pointing from other countries. China is capable of defending its independence in national governance. To manage frictions between China and the West in terms of values, China also has the power to force those interventionists to confine themselves to talking but exercising restraint in actual actions. In most cases, their so-called sanctions are just for show.

Take a look at what is happening in the Five Eyes countries. The US and the UK are both among the countries hit hardest by COVID-19, and both have deep domestic conflicts and long-term uncertainties. Canada and Australia, with their small populations and vast land resources, are more like "Western slackers" than the European countries who have strong crisis awareness. They all need to see where their crisis lies and who their real enemies are. Otherwise, they will always have a misconception that China is poisoning them whenever they are not feeling well. How absurd such a logic is!