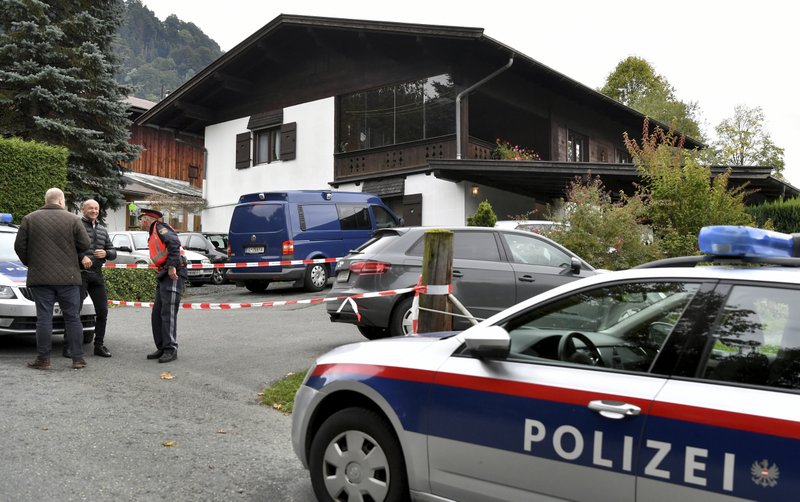 A police car is parked in front of a house in Kitzbuehl, Austria, October 6, 2019. Austrian police say a 25-year-old man's in custody after allegedly killing his ex-girlfriend, her family, and her new boyfriend in the Alpine resort town of Kitzbuehel. The 25-year-old turned himself to police in the town east of Innsbruck and admitted to the five slayings early Sunday morning, Austrian news agency APA reported. (Photo: AP)

VIENNA (Xinhua) -- A 25-year-old man shot five people dead in the early hours of Sunday morning in Kitzbuhel, a small Alpine town east of Innsbruck, in Austria, before he turned himself in to police, local police said.

The victims are, according to the authorities, his 19-year-old ex-girlfriend and her brother, parents and new boyfriend. The crime scene was a family house.

The perpetrator, identified as Andreas E., showed up at local police station at around 6 o'clock in the morning and confessed that he had killed five people, said Walter Pupp, the head of the State Office of Criminal Investigation at a press conference.

The police immediately drove to the scene and found five lifeless persons.

Before the shooting, the suspect was involved in a dispute with his ex-girl friend and her family, according to the police.

The offender, who works for a construction company, comes from the Kitzbuhel area and has no migration background.

"We are all shocked and deeply saddened," said Kitzbhel's mayor Klaus Winkler.

"It has never happened that a whole family was wiped out so tragically," he added. Enditem